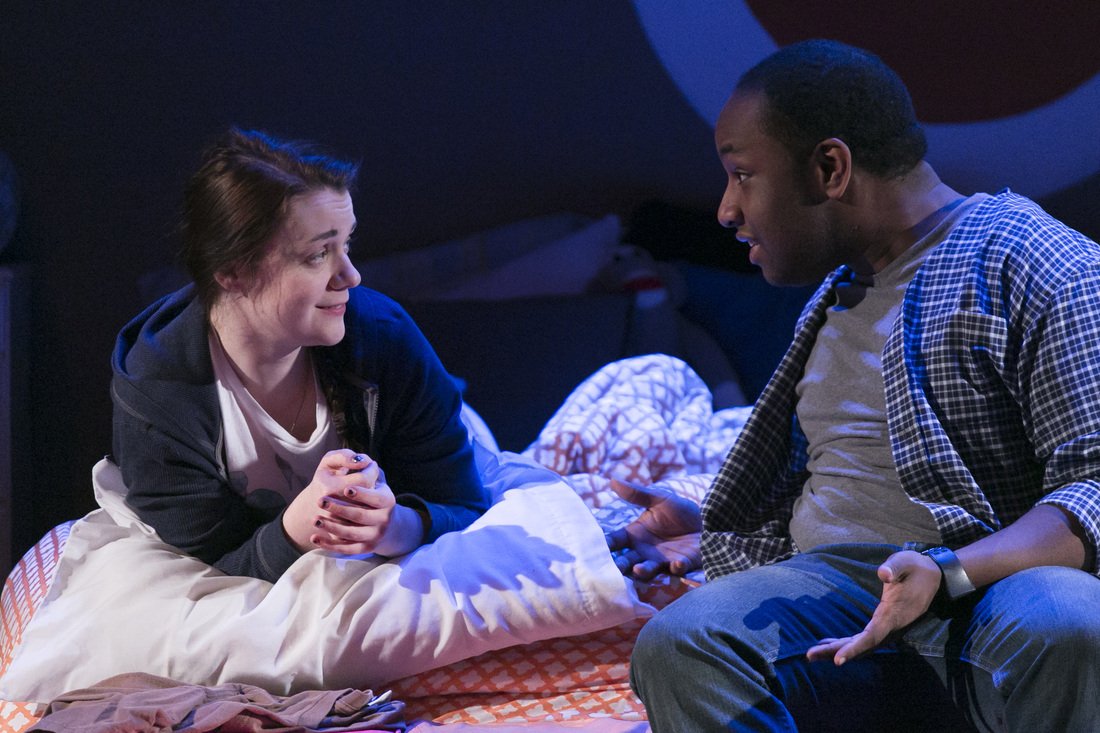 Chelsie Newhad (Caroline) and Ricardo Beaird (Anthony) in Public Theater of Minnesota's production of I And You; photo by Heidi Bohnenkamp

I became a big fan of Lauren Gunderson’s writing when Theatre Pro Rata produced her play Emelie: La Marquise Du Chatelet Defends Her Life Tonight back in 2013. When I learned the Public Theater of Minnesota was going to be mounting another of her plays, I And You, I was naturally very curious. In many ways, I And You has a lot of the same Gunderson hallmarks as Emelie—strong female lead role, smart funny characters saying clever things about big ideas. But in just as many ways, Gunderson shows her range in creating a play that is so completely different.

“That’s what you get for homework-bombing a sick girl.”

I And You takes place in the present, for starters. Rather than adults, the characters are both in their high school years. And there’s just the two of them, holding the stage for nearly an hour and a half together. Caroline (Chelsie Newhard) is a cranky young woman waiting impatiently for an organ transplant so her life can return to normal. Anthony (Ricardo Beaird) shows up in her bedroom doorway unannounced with a homework assignment in hand. Their initially antagonistic relationship naturally blossoms into something more, but in a whopper of a twist in the last five minutes, the connection is revealed to be not at all what we expected.

But I And You isn’t really about the big twist at the end. It’s about the bond the two teens form in the time before that. Like all new relationships, it’s complicated and awkward and has its share of setbacks on the way to a greater understanding and a deeper connection. That makes it sound cliche, but Gunderson is a smart enough writer to subvert a lot of those cliches, playing with audience expectation to get new mileage out of an old plot structure.

“This isn’t me helping. This is triage.”

Director Mark Hauck guides his two young actors well, and both Newhard and Beaird prove more than capable of carrying the show and getting us to invest in these two oddball characters and the possibility of their becoming friends.

“This is why I hate poetry. They ask you what you think it’s about and then they say ‘Wrong, it’s about these 14 other things that aren’t obvious.’”

Set designer Eli Schlatter’s creation of Caroline’s bedroom onstage is quite impressive. From the larger architectural lines of the room down to the smaller details that really make it a teenager’s personal space, Schlatter grounds the play in the kind of reality I’d convinced myself to do without when seeing productions by smaller theater companies. It’s eye-catching in its attention to detail and the truth of rendering reality in the unreal context of a proscenium arch.

“You do realize he stole this from black people.”

Also key to how the production and the play work their magic is Anita Kelling’s sound design, which shines brightest during that final turn in the plot, melding sounds that came before into a different kind of symphony.

“Just know that everything else was true.”

The thing nagging at me about I And You, which would normally sink a play from a less skilled playwright, is the use of other people’s art as a way to bridge a gap between the characters and bring them closer together. As a rule, I’m not a fan of piggybacking on another artist’s work. To lean so heavily on the art of another in order to tell your own story feels a little like cheating to me. Here, Caroline and Anthony are working on a project related to Walt Whitman’s masterwork Leaves of Grass. I like Walt Whitman as much as the next guy, but I And You veers dangerously close to the territory of a teenager appropriating the words and views of someone else and pretending they are their own. Which, of course, is something teenagers, something we all, do. Why reinvent the wheel when someone else has already said something so well and succinctly?

“You don’t have to do anything except not kick me out right away. Can we try that?”

Caroline also has an affinity for Jerry Lee Lewis’ song Great Balls of Fire, while Anthony extolls the virtues of John Coltrane’s A Love Supreme. Again, both fine works of musical art, but the play leans on them pretty heavily as well. Gunderson does it well, and makes her own points in the service of the two characters, so I can almost forgive her the appropriation. The problem is, I just don’t quite buy it. Being forced to read Whitman and both young people falling so completely in love with him is enough of a stretch. But for both of them to have very old taste in music, no matter how good it is? It feels convenient for the author, who probably also loves all these things and wants us to love them, too.  It doesn’t feel like these are the genuine passions of 21st century teenagers.

Like I said, I can forgive a lot.  Gunderson’s script is smart and entertaining. The actors are good both individually and together. The design is an unexpected bonus. And the big twist at the end doesn’t feel like a cheat at all. In fact, it allows two people to get together in a way the otherwise never would. And if you’re going to piggyback on someone else’s art, you could do a lot worse for a vehicle than Whitman or Coltrane or Lewis. But it’s still piggybacking.

In some ways, I And You feels like it’s taking one too many shortcuts. It’s still a good play, and worth seeing. I’m just wondering what else Gunderson could have done if more of the words were hers. Emelie is a good example. Even though the characters were all historical figures and I’m sure many of their words were culled from their own writings—at least the words were their own. They came from the characters. They were also, of course, older. They had more life experience. It’s hard to pull the same thing from characters as young as Caroline and Anthony. Maybe they need the gravity of Whitman to help them out. I And You isn’t perfect, but it’s still very engaging, and often moving. An evening with these characters is time well spent.