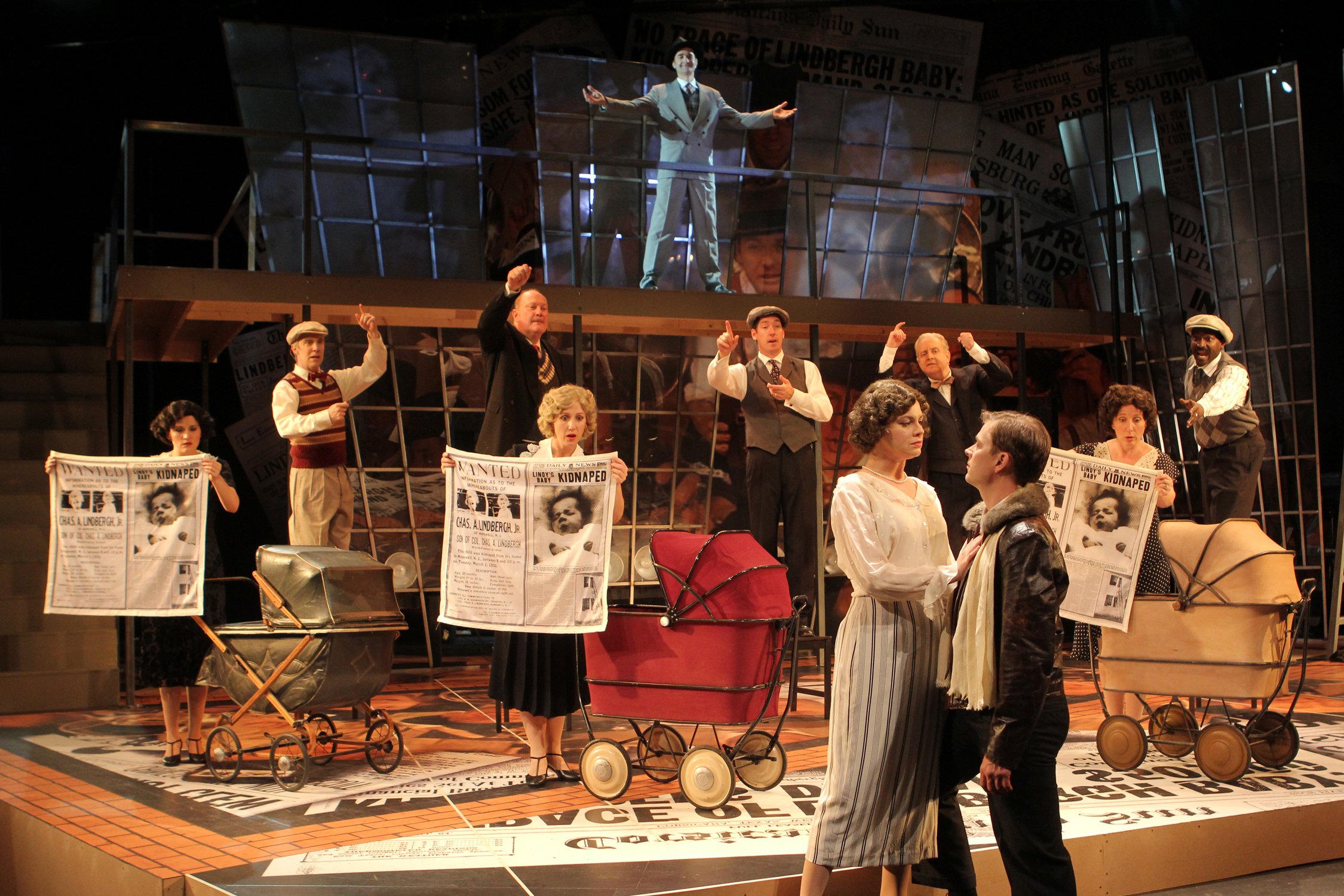 Media sensationalism surrounding crimes and trials are the norm these days, the O.J. Simpson case being one in recent memory being. But even O.J.’s cased paled in comparison with the frenzy that erupted in the pre-television days of the 1930s with the kidnapping of the Lindberg baby. An ambitious production of Baby Case currently playing at the Minnesota History Theatre seeks to recreate musically the media obsession with the kidnapping and death of Charles Lindberg’s young child.

It is hard to imagine today a person who comes even close to the almost mythical international acclaim that was accorded to Charles Lindberg following his solo flight across the Atlantic. From the time of this flight, the media was obsessed with Lindberg. After Lindberg’s storybook marriage to Ann Morrow and the birth of his son, Charles Lindberg, Jr., the media went ballistic when his son was kidnapped. The child’s body was later found and it was believed he died shortly after he was abducted. Although it took two years to make an arrest, the media kept looking for a story often targeting possible suspects, including a maid who lived at the Lindberg home who ultimately committed suicide. Once Bruno Richard Hauptmann was arrested, the media focused on his trial and eventual execution.

My first reaction when I first heard there was a musical about the Lindberg kidnapping, as with the Guthrie’s showing three years ago on The Scottsboro Boys, was, How do you make a musical out of such a tragedy? But Michael Ogborn’s musical seeks to satirize the media circus that surrounded these events instead of sensationalize it. Director Ron Peluso, musical director Jake Endres and choreographer Jan Puffer make a valiant effort to bring this satire to life.

The talented ensemble performers keep the show moving at a good clip, slowing down only for a couple of ballads. A standout in the ensemble is Kendall Anne Thompson who, among other roles, plays Anne Morrow Lindberg. Her performance of “Lullaby” and “One Little Boy” are among the show’s highpoints. Peter Middlecamp, who plays both Lindberg and Hauptmann, is also noteworthy especially in the musical number “No, I Never Did.”

Set designer Michael Hoover’s two-level set is quite ingenious and deserving of praise. The set also effectively functions as the Lindberg home and multiple other places. It sports a fire pole for characters to theatrically move between the two levels and a background of giant newspaper headings and projections. E. Amy Hill also should be noted for the convincing thirties style costumes.

The energetic production helps make up for the fact that the production, at times, is bogged down by the inclusion of over 25 songs, with too many of them sounding similar. None of the multitude of songs in this show reaches the level of “They Both Reached for the Gun” in the musical Chicago‘s satire of sensational murder trials. This production comes closest with “No, I Never Did” sung by Hauptmann. Ogborn’s musical would benefit from a focus on only the most outrageous absurdities in this tragedy, not every sad, strange detail.