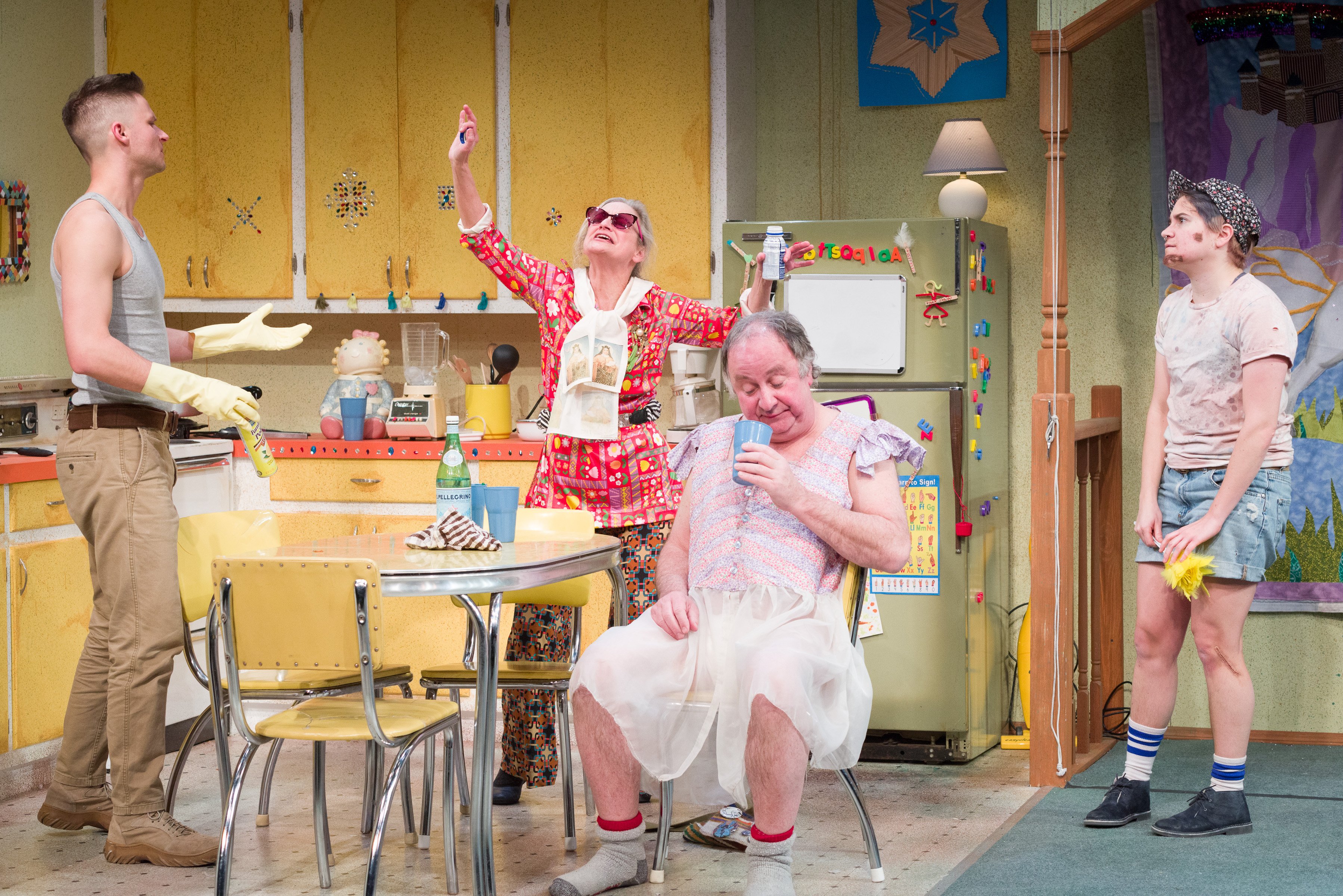 You should go see Mixed Blood’s current production of Taylor Mac’s comedy Hir, under the direction of Niegel Smith. It’s a chameleon of a play that can look different to everyone who watches it. Regardless of whether it ends up bewitching you or just weirding you out, it’s still a heck of a lot of fun to watch in action.

“I want to know how far down I have to go before I can drag you back with me.”

Isaac (Dustin Bronson) returns home, dishonorably discharged from the military during wartime, to find his childhood home transformed into a dump. His mother Paige (Sally Wingert) has taken over and is finally running the place the way she sees fit. His father Arnold (John Paul Gamoke) is adjusting to life after a debilitating stroke, which Paige sees as an opportunity to reform his behavior. Paige has dressed Arnold in a diaper, women’s clothing, a purple fright wig and clown makeup. She is also dosing him with estrogen to make him more docile. Also ingesting hormones is Isaac’s former sister Max (Jay Eisenberg), who is transitioning into becoming Isaac’s younger brother instead. The Hir of the title is Max’s new pronoun of choice, neither he nor she. Isaac’s instinctive response to repeatedly vomit into the kitchen sink may have as much to do with the illegal drugs he’s ingested, and his post-traumatic stress disorder, as it does the unsettling radical changes to his former home.

That might not sound funny, but Hir is disturbingly hilarious.  In fact, as weird and deliberately absurd as it was, I was thoroughly enjoying myself. Sure, my higher brain functions were a bit more reserved thinking “Well, this is bleak” or “That can’t be healthy.” But the actors all throw themselves into this oddness with such delighted enthusiasm that it’s hard not to get caught up in the strange whimsy of it all.

“It’s easier to see what’s really happening in the world with the volume off.”

Under the surface, Hir is not just exploding our comfortable standards of old-fashioned gender roles and relations, it’s furiously dismantling the very notion of family. The underlying rationale for all of this seems to be that you can’t really fix something until you take it completely apart and look at the innards and see how it works (or isn’t working). Everyone has their own very personal recollection of the past in this family, and they steadfastly refuse to relinquish it to anyone else’s version. That makes for some rather volcanic confrontations in the second act.

“The more your beard grows in the more literal you become.”

Control is a central construct here. Who has control, and what are they willing to do to maintain it or grab it back from someone who’s taken it. Power struggles take place over things as small as turning the air conditioner on and off, and as large as the expression of someone’s gender or sexuality. The friend who accompanied me to the theater and I both saw those power struggles in very different ways.

“I puked because it’s too awesome.”

Don’t you think the play could be interpreted, whether that’s its intention or not, as saying women are bad and men are good? Really?  I certainly don’t think it meant that. Whether it meant it or not, the women are in charge and everything’s a mess.  It’s destructive.  And the men could be seen as bringing order. That’s only if you think tearing down the existing order is a bad thing, and that trying to preserve or reestablish the old way of doing things is inherently a better thing.

“It’s him wanting to be more powerful than a house.”

But I have to admit, perhaps because it’s so much fun to watch Sally Wingert let loose as Paige, that I was completely swept up in her character’s way of seeing things. Paige also makes a good point in regard to the way Arthur behaved prior to his stroke. He was abusive not just of his wife but also his daughter, physically as well as emotionally. In Paige’s case, Arthur also abused her sexually. Now, we only have Paige’s word for some of this, but Max can corroborate a lot of the same narrative.

“Don’t you pity him.  We will not rewrite his history with pity.”

Is taking advantage of someone’s diminished mental capacity a bad thing? Well, yes.  If that person’s been bad to you in the past, does that justify your treatment of them now as a kind of revenge? Probably not. Still, it’s hard for me to see Paige as a monster. My friend also wondered if Paige might be pushing Max’s gender transformation. Oh wow, that never even occurred to me. But given how Paige feels about men, her husband and her older son in particular, and traditional male roles in society in general, why would she want to encourage the creation of yet another man in her family? Granted, Max would be a different sort of man, one more aware of his mother’s suffering and women’s inequality. But even in the short span of time Max spends with his brother Isaac, Paige quickly sees male privilege and male aggression beginning to take root. If anything, I’d understand Paige pushing for Max to remain a girl so Paige wouldn’t feel outnumbered, rather than encourage Max to become the very thing that Paige has been fighting against all these years. Paige seems too selfish to altruistically encourage Max to leave the female gender in order to take advantage of the privileges of being a white guy. Is Paige a bad parent? Very likely. Is she the bad guy here, in the structure of the play? I don’t think so.

“I can’t breathe with that normative table in here!”

In fact, the reassertion of male dominance in the beginning of the second act, with Isaac transforming the cluttered, laundry-strewn home to a neat and tidy space, and putting Arnold back in men’s attire, made me feel a lot more nervous than anything Paige was doing. This is borne out by the other hidden bumps and bruises around the house which Paige reveals late in the action. Change is messy, but here it looks to have been an improvement over the former status quo. The traditional family unit may not survive, but it also in this case may not have been worth saving. However, does one person need to take down everything around them in order to survive? Is that too high a price for other people to pay? Can some people not be saved? Is everyone worth saving? Who gets to decide? (I know, not your typical subject matter for a comedy—but why not?) Thinking about it afterward, with a chance to breathe, I realize I may have been asking myself the wrong questions. Instead of “What does it mean to be a woman?” or “What does it mean to be a man?” I probably should have been asking “What does it mean to be a human being?”

“You can’t mess with content and form at the same time.”

Because Hir is so off-the-wall from start to finish, it makes for an ideal evening of live theater. Anything, good or bad, could happen with these people in close proximity to one another. That’s what gives Hirits edge. The play, and the characters in it, are capable of anything. The production lives up to that standard—actors, director, designers, the stage crew that transforms the home during intermission. Mixed Blood is on a roll this season. See Hir. You’re probably not going to get a chance to see anything else quite like it this year, even if it is only March.