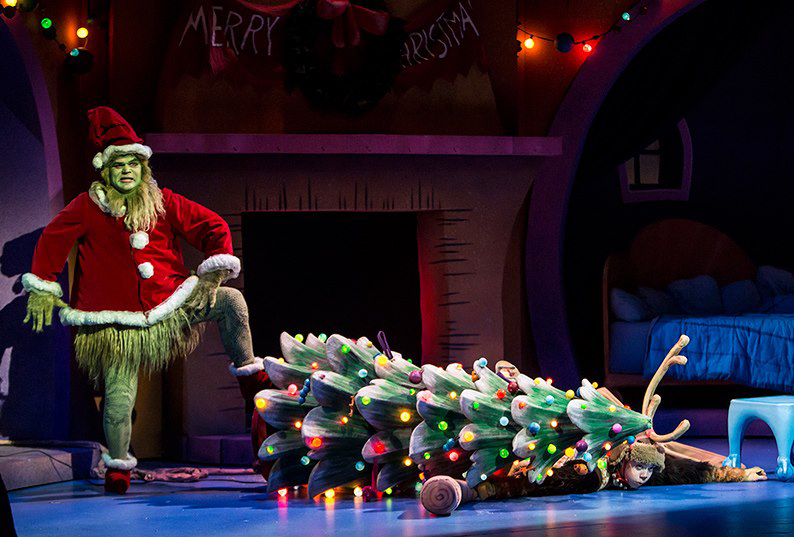 As the lights dim and the Children’s Theatre Company’s production of Dr. Seuss’ How the Grinch Stole Christmas is about to begin, a voice recites a poem, complete with Seuss-ian fantastical words and playful rhymes, asking audience members to turn off their electronic devices. Unfortunately, this is the most creative piece of writing in the show.

Mel Marvin’s music is a delight, especially the instrumental sound effects, but Timothy Mason’s lyrics, filled with forced rhymes and sappy clichés, grate against Seuss’s writing rather than complementing it.

The asinine musical numbers don’t quite succeed in ruining the show, however. Linda Talcott Lee’s exceptional choreography, along with a set and costumes that could have come straight from the pages of Dr. Seuss’s 1957 book, create a visual feast. And the show, under Peter C. Brosius’s direction, presents one masterful special effect after another. I’m still wondering how they achieved the sleigh flying down the mountain.

All of the roles are physically demanding, particularly that of Max, charmingly played by Brandon Brooks, and all of the actors expertly rise to the challenge. The physical gags are overdone just enough to please the little ones in the audience.

Everything in the show pleases the eyes, but very little satisfies the ears. A refreshing moment comes when a group of basso voices sings “You’re a Mean One, Mr. Grinch.” But after hearing that song, with lyrics by Dr. Seuss himself, I waited with hopeful anticipation for the other one from the 1966 TV special—the delightful gibberish the Whos sing in a circle, holding hands, welcoming Christmas day in spite of Scrooge’s plotting. It never comes. Instead the audience must sit through a treacly number that goes something like “Who likes Christmas? Whos like Christmas…”

It is always dangerous to stage a beloved classic. This production almost succeeds. But if you’re going to add to the words of one of the greatest children’s authors ever, you had better take the time to puzzle and puzzle till your puzzler is sore. This production sounds like someone sat down for an hour or two and threw some rhymes together with vague messages about happiness and shopping. As the Grinch discovers, “Christmas, perhaps, means a little bit more.”