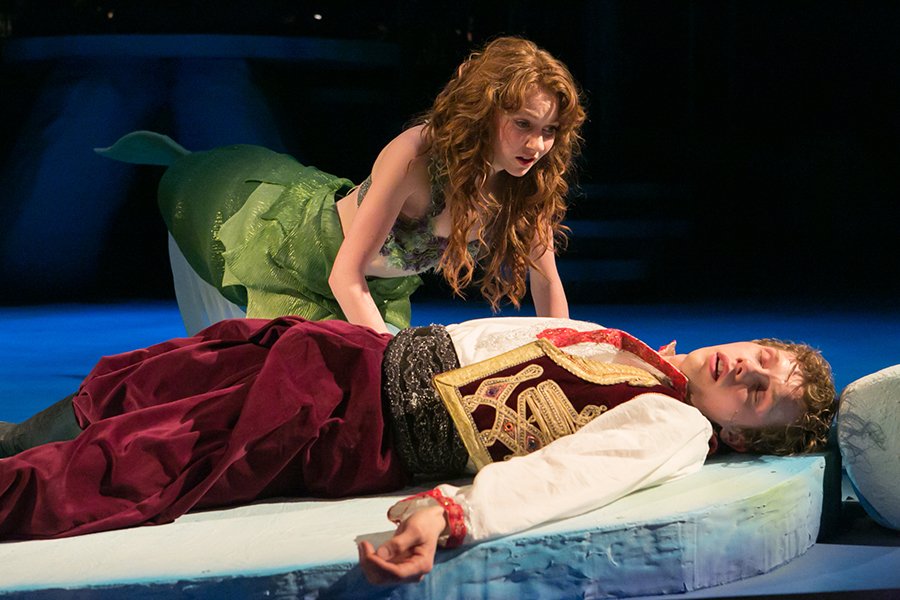 On Friday, March 7, Chanhassen Dinner Theatres presented the Midwest premiere of Disney’s The Little Mermaid, the stage adaptation of the classic Disney animated film. This dazzling production begins sumptuously and, like its heroine, finds its sea legs as the evening goes on.

Perhaps the first question audiences might ask is, “How does the stage show compare to the film?” Given the 1989 film’s now iconic status, this is not an idle inquiry; there is much to live up to, both in sonic terms and built-in visual expectations. The production at Chanhassen does not disappoint, retaining the essential spirit of the original while evolving into its own animal as the evening continues. The mealtime experience – dining under blue-green, undersea lighting from the stage – makes for a delicious and gentle transition from winter cold to the warmer fantasy world. Neither the stage courses nor the dessert that follows disappoint.

The leading character of The Little Mermaid Ariel (Caroline Innerbichler) stays true to the original, but the roles of Prince Eric (Tyler Michaels), King Triton (Keith Rice), and Ursula (Kersten Rodau) are significantly and agreeably expanded. Innerbichler is riveting as Ariel, suffusing each scene with a rich energy and endearing sense of wonder and reveling – even in long scenes when she does not speak. Michaels makes for a dashing, charming, and zestful Prince; those who saw his recent and excellent turn as the Emcee in Latté Da’s Cabaret might scarcely believe that it’s the same actor. Innerbichler and Michaels have an engaging chemistry that builds from sweet and pining to deliciously sweet and smoldering over the course of the evening. This mutual courtship is one of the many welcome updates to the film script, along with Ariel escaping the “damsel in distress” cliché of her own accord; when the two finally marry, it’s a pairing between equals.

The adventures, ballads, and flashy production numbers along the way are rich in color and frequently spill from the stage into the house. The aquatic costumes designed by Rich Hamson are sumptuous and beautiful to behold in action, with mermaids’ tails swishing as they glide across the stage and sea horses bobbing their heads as they race through the house; a return visit is recommended just to try and take in more of the action in the larger pieces like “Under the Sea” and “Kiss the Girl.” Many delicious smaller touches enliven scenes, like the sinuous movements of Ursula’s tentacles during her sarcastic “Poor Unfortunate Souls” and the staging of a bubble bath. Some matters of plot are taken fast and loose, but the musical numbers are tight and the dancing tighter. A strong and sizable cast completes an elaborate and thoroughly enjoyable show.