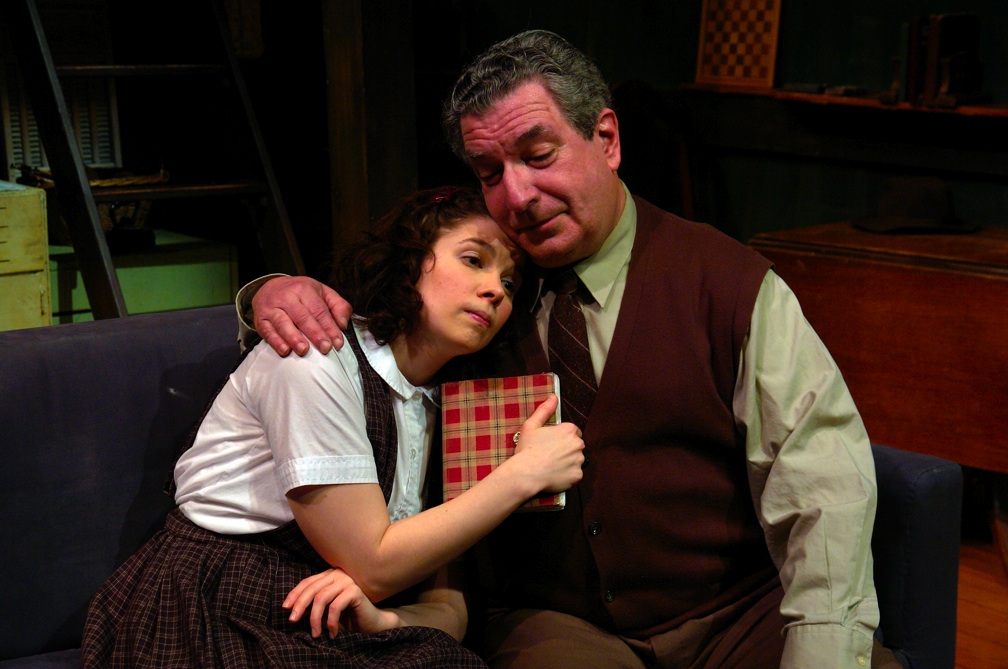 There seems to be no limit to the number of times we need to be encouraged not to take life for granted. If anyone is in a position to remind us, it is Anne Frank, the girl who spent two years hiding from Nazis with seven other people in a loft they could never leave. In a line from Park Square Theatre’s production of The Diary of Anne Frank, Anne says to Peter, her fellow hider and almost boyfriend, “You know, someday, when we get out of here, let’s go for a walk.” Because a walk outside is something they can only dream of.

I wanted to love The Diary of Anne Frank. I only managed to like it. The performance, directed by Scott Rubsam, is wracked with inconsistency. Frances Goodrich and Albert Hackett’s script contains a great deal of lovely material cheapened by too frequent clichés. Most of the cast exhibit middling performances punctuated by moments of brilliance.

Kathryn Lawrey and Peter Thomson give the only two consistently captivating performances as Anne and her father Otto. Lawrey particularly impresses with her portrayal of a 13-year-old, considering the actress is 23. This age disparity could have been disastrous in the wrong hands. Without turning the youthful Anne into a caricature, and at the same time not acting too mature, Lawrey easily creates a character who is exactly what any 13-year-old should be—curious about boys, bouncing off the walls, and disobedient toward her mother. And when the sirens whine or the night terrors come, Lawrey is able to carry the emotional weight they bring with them.

Gabriel Backlund’s strictly traditional set is crowded to the point of discomfort, which no doubt is meant to convey the close quarters of the loft and heighten the tension, but much of the stage either isn’t used or is difficult to see from any angle. A more imaginative set would have created the claustrophobic mood without detracting from the production.

In general the quieter, more reflective moments work better than the scenes of chaos. The yelling matches go on too long and happen too often. Again, I’m sure their purpose is to demonstrate the unbearable tension of living in such circumstances, but the artistry is missing. The calmer scenes allow the best of each performer to come out. The most effective moments, oddly, are the scene changes. Recordings of Lawrey reading excerpts from Anne’s diary play while performers move set pieces and take their positions. The diary says more in the darkness than any of the action on stage that follows.

Because we know the ending, one such passage breaks the heart: “I feel that spring is coming. I feel it in my whole body and soul.” All eight hiders were arrested less than one year before the end of the war. They almost made it, and Anne had such faith they would.

It is impossible not to be moved by The Diary of Anne Frank. A bad performance with the same material would stir almost anyone. And this is not a bad performance. It just could have been so much better. It is Lawrey’s effortless portrayal of a girl maintaining hope in a world she is too young to understand that carries an otherwise unremarkable play.