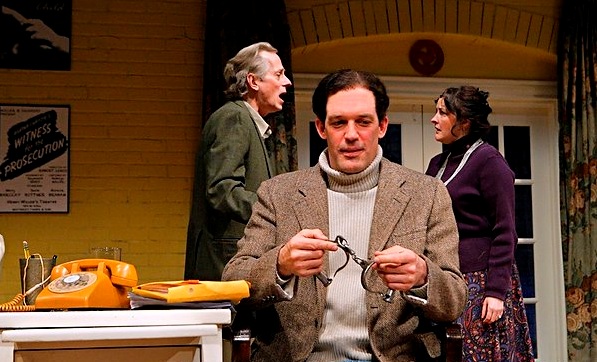 A washed-up playwright, a supportive wife, an aspiring young playwright who has written a top notch thriller, a secluded location and a wall decorated with death instruments. These are the key elements of Jungle Theater’s production of Deathtrap, each harboring a clue to a mystery. While parodying the thriller genre, the play also effectively surprises and shocks. It is virtually impossible to share more about the play without spoiling the suspense.

The Ira Levin play first opened on Broadway in 1978 where it had an extremely successful four-year run. Consistent with its tradition of doing one suspense thriller a season, Jungle Theater presents a well-done production which is more about who hasn’t done it than who did it.

Bain Boehlke directs this comedy thriller for maximum effectiveness, oftentimes with a tongue-in-cheek approach which at times can still be chilling. Suffice it to say the show has numerous twists and turns, several of which are not foreseeable and one of which nearly had me jumping out of my seat.

The production boasts some first-rate acting. Steve Hendrickson does a masterful job of playing the washed up playwright, Sidney, who is desperate to get another hit so as not be financially dependent on his wife. He is arrogant about a writing talent that he seems to have lost. But his seemingly harmless nature makes more shocking his sudden change in conduct. Michael Booth is delightful as the charming aspiring playwright who also has a hidden nature.  My favorite performance was by Cheryl Willis as Sidney’s younger, submissive wife. When the action takes a sudden violent turn, Willis’ reaction rang true of someone in shock struggling to carry on. Porter Milgrim plays an estate attorney whose mannerisms are reminiscent of my own attorney. Finally, Claudia Wilkens has a great time hamming up her performance as the local neighborhood Dutch clairvoyant.

It is not great dramatic work about the human condition, but Deathtrap makes for a thoroughly enjoyable evening.