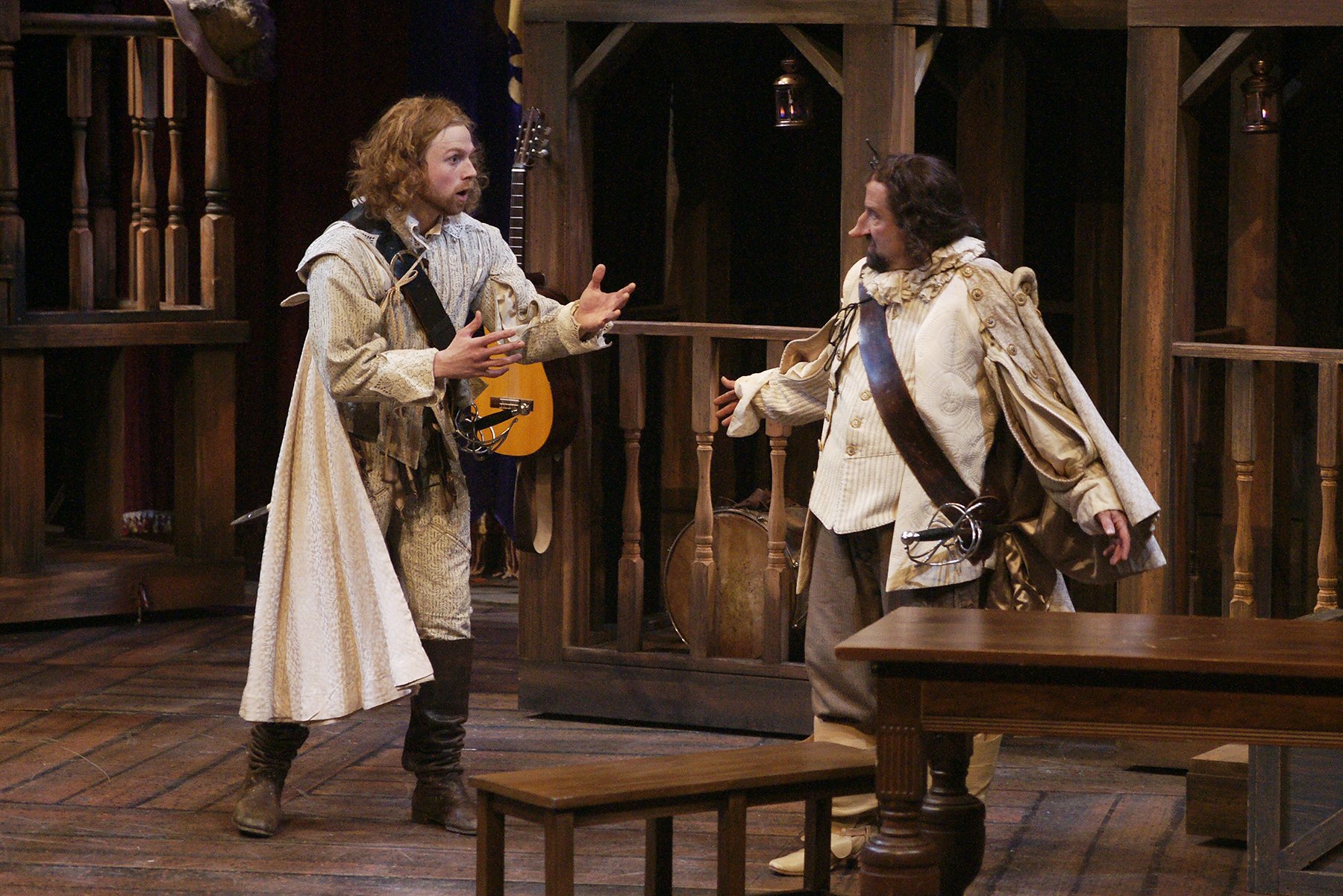 Cyrano opened Friday, March 21 at Park Square Theatre. Director Joe Chvala provides a theatrical romp with much emphasis on the play’s humor. The original play, Cyrano de Bergerac, was written by the French playwright Edmond Rostand. Probably the best known English translation was done by Anthony Burgess which I saw in the 1970s with its world premiere at the Guthrie Theater. The production at Park Square Theatre was translated by Michael Hollinger and adapted for the stage by Hollinger and Aaron Posner. This newer translation is closer to the original intent of the Rostand play than Burgess’ translation.

Set in France during the 17th Century, the play-within-a-play concept starts out with the actors milling about on stage setting up for the performance. Once it begins, we learn of Cyrano de Bergerac, a solder with the Guards of Gascony, who is well known both as a deadly duelist and as a poet/playwright. Due to his almost superhuman ability with a sword, those who know Cyrano know better than to make fun of his most visible attribute – an unusually large nose. Although Cyrano has many attractive attributes, he feels his large nose makes him too ugly to make possible any romantic relationship with his beautiful and beloved cousin Roxane.

When the handsome Christian arrives on the scene as a new recruit for the Gascony Guard, Roxane and Christian see each other and both immediately become infatuated from afar based solely on their looks. Roxane confesses her infatuation to her cousin Cyrano, who initially was hopeful she was confessing her love for him. Roxane makes Cyrano promise her that he will look out for Christian’s welfare. The pledge leads to an uproarious turn when Christian repeatedly makes fun of Cyrano’s nose and, to everyone’s shock, Cyrano refrains from striking down Christian with his sword.

More comic interplay comes from Cyrano’s decision to further Roxane’s love for Christian by helping the hapless soldier, who lacks the ability to put more than three words together. Cyrano writes poetic love letters for Christian and delivers them on Christian’s behalf to Roxane. This “love by proxy” culminates in a hilarious balcony scene where Cyrano whispers poetic verse to Christian who haltingly repeats his words so badly that Cyrano must take over and directly declares his love to Roxane while appearing in the shadows as Christian. Inevitably, this sparks the comic confusion of who does Roxane actually love: Christian or Cyrano?

J.C. Culter plays Cyrano as a short man with a larger-than-life presence and biting satirical wit. But the production’s energy level really takes off when Emily Gunyou Halass as Roxane banters with Cyrano and later with a Count who plots to make Roxane his mistress. Despite Cyrano’s heartfelt wit in the balcony scene, it is Roxane’s facial expressions that steal the scene. The remainder of the cast does an engaging job playing multiple roles, but the true standout is Craig Johnson with his sour-lemon face when he plays the role of Roxane’s nurse.

As rousing as this production was, I found it somewhat wanting compared to the Anthony Burgess translation that I saw performed at the Guthrie. Hollinger’s translation may be more true to Rostand’s play, but Burgess may have made a better play with his translation. Two changes in this translation did not work well. One is the addition of the scene in which Cyrano kills 100 men who seek to harm his friend—a scene I soon lost interest in. The other change was the deletion of Roxane’s famous line: “I have never loved but one man in my life and I have lost him twice.” Although the Guthrie production still looms large in my memory, Park Square’s production of Hollinger’s translation is an amusing frolic that is well worth seeing.