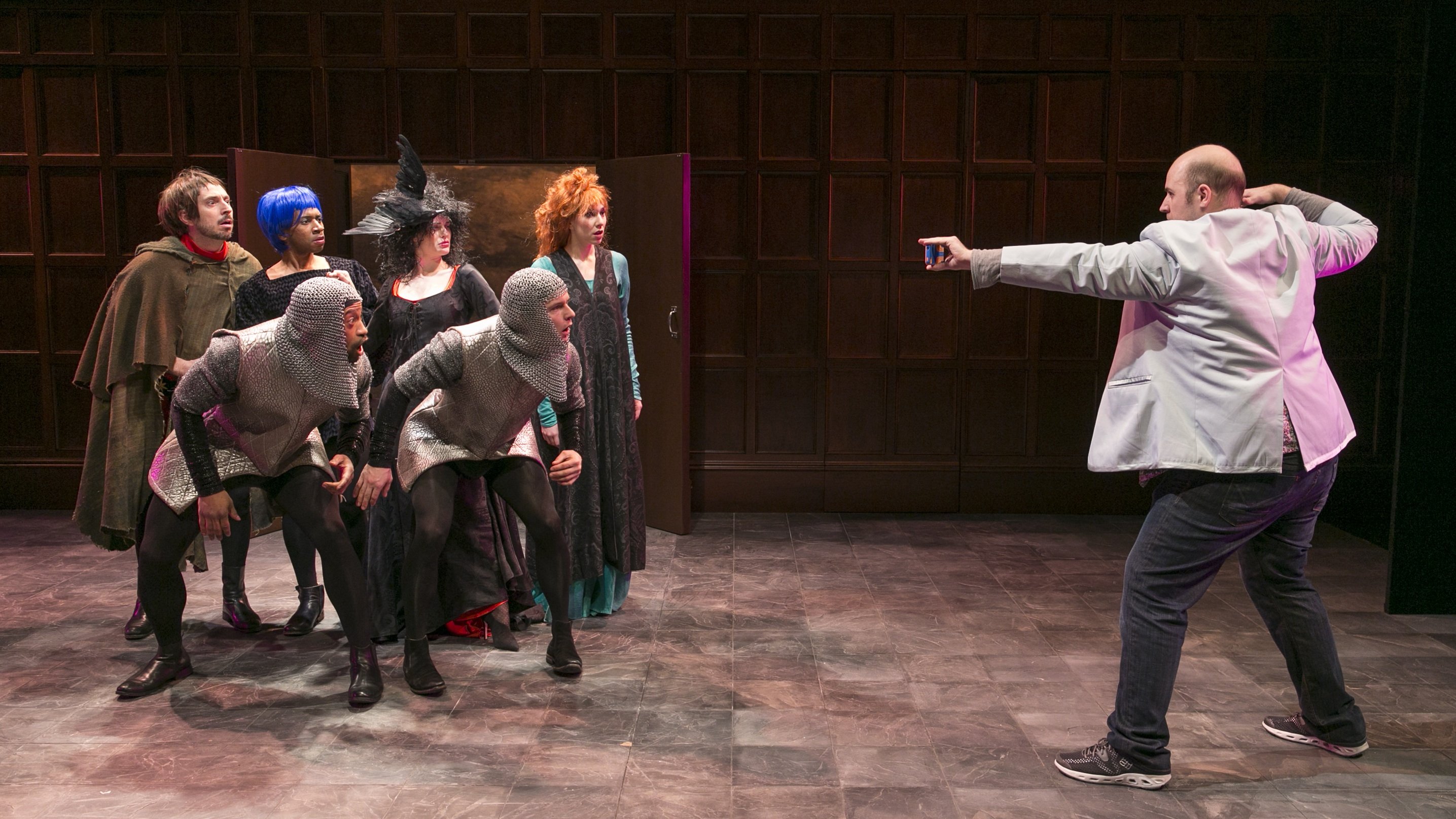 Andy Nogasky (Hank) faces down the rest of The Acting Company in Jeffrey Hatcher's new adaptation of A Connecticut Yankee at King Arthur's Court.

Jeffrey Hatcher’s adaptation of A Connecticut Yankee in King Arthur’s Court is an adaptation in the same sense that the movie Jurassic Park is an adaptation of Michael Crichton’s novel of the same name. The basic concept is the same, some common beats are hit, and much of the rest is entirely its own animal. (No velociraptors were harmed in the making of Hatcher’s A Connecticut Yankee.) The looseness of Hatcher’s adaptation is a strength, producing a satire that is much funnier than a straight adaptation would have been. The Acting Company’s premiere of this play, now at the Guthrie, makes for a light but smartly done evening.

Without giving too much away, Hatcher’s version of this tale starts in a scenario ripe for comedy: a high school reunion. Some razzing and an old flame later, Hank (Andy Nogasky) is unexpectedly thrown back in time to the court of King Arthur (Adam Mondschein). Thanks to his trusty iPhone and some prescient downloads, Hank establishes himself as Court Wizard and finds his life increasingly complicated by medieval power plays. Along the way, he delivers a wide variety of acerbic and sardonic one-liners, repurposes a few song standards to comedic ends, and courts romance.

Hatcher’s Hank is a much more compelling protagonist than Twain’s, who in the novel arrived preformed as a commanding man of action. Twain’s protagonist plowed easily through the backwards world in which he was plunged; Hatcher’s has a great deal more difficulty, starting with a lack of social graces, running through his deep-rooted pacifism, and colliding with his romantic inexperience. This excuses and even encourages a great deal of hamming by the rest of the cast, and puts Hank as fish doubly out of water – out of touch with people and out of his own time, both of which are mined for a great deal of comedy. Nogasky rises well to the challenges of sustaining this show.

Most of the ensemble is at least double cast, with a parade of personages and minor characters dashing on and off while the dressers work double time backstage. Grant Fletcher Prewitt (Charlie/Clarence) plays a good straight man to Nogasky’s man out of time; most of the other characters serve as various foils until Mordred (Joshua David Robinson) and Morgan Le Fay (Susannah Stahlmann) arrive on the scene. Ian Belkamp’s direction is well paced and finely balanced, especially in building romantic tension between Lanie/Sandy (an excellent set of performances by Suzy Kohane) and Hank.