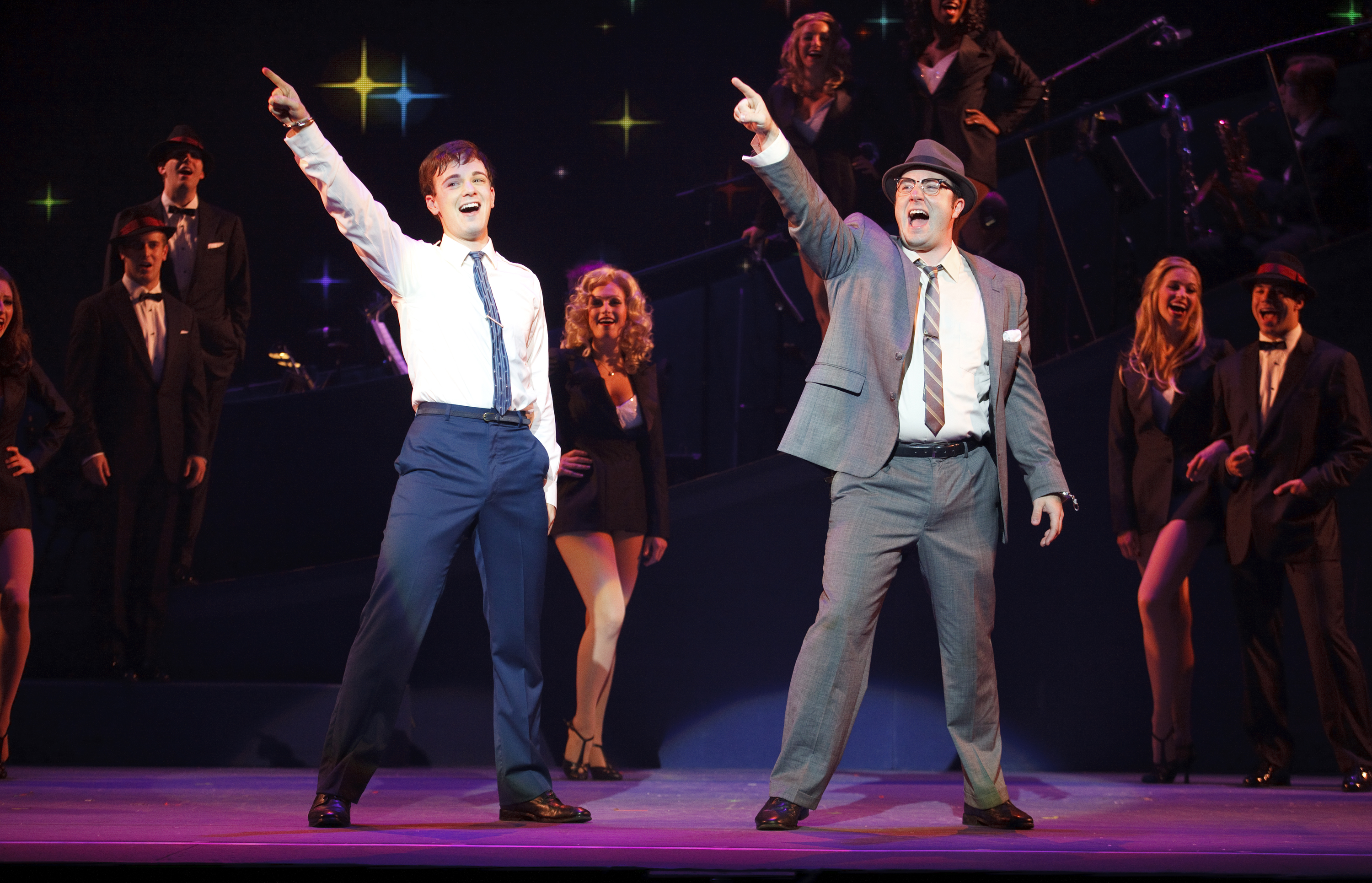 While waiting for a ride in the lobby outside Rock Bottom after opening night of Catch Me If You Can, Frank Abagnale Jr. walked in and headed towards the escalator to go to the after party at Crave. He was stopped by theatergoers to snap a few pictures and sign playbills. After some delay, and as he was moving closer and closer to the escalator, my friend told me she was going to go get his autograph too. I said after her, “Okay, if you can catch him.” The pun was completely (and disappointingly) unintended.

The ironic thing is, though, that Frank Abagnale Jr. seems to be anything but inaccessible. Just earlier in the day he gave a talk at US Bank about fraud and identity theft (Abagnale Jr. has been an FBI agent for 36 years and a keynote speaker at many events). And after the performance, he gave a 20-minute Q&A session, where he asked for any and all questions from the audience. Not to mention, his criminal adventures from age 16 to 21, where he successfully posed as a co-pilot, doctor, and lawyer, are well documented forms of entertainment: a book (written by Abagnale Jr. himself,) movie (directed by Stephen Spielberg), and now musical (written by Marc Shaiman and Scott Whittman).

I’ll admit that in the twenty minutes that Abagnale Jr. answered audience questions, I felt more enraptured than I did throughout the entire show. It’s mostly testament to his ability to captivate an audience (obviously, right?). The musical production follows the movie’s plot to a T, except of course for the musical digressions. The numbers in the first act seemed to spill into each other, without much musical variation aside from the lyrics. I’m not even sure if I could recall a tune. But that wasn’t the case in the second act. “Little Boy, Be a Man” and “Seven Wonders” all stuck out as numbers that added to the story rather than distract from it.

The production value of Catch Me If You Can is astounding, and reason enough to see the show. David Rockwell’s scenic design makes the chasing aspect of the story possible on one stage. And the backup dancers and choreography by Jerry Mitchell add profoundly to the value of the show. Stephen Anthony plays a sweetly charismatic, yet cunning Frank Abagnale Jr., who also looks like the teenager he should be. The real Abagnale Jr. said that during this period of his life, he never assumed that he was going to get away with anything, and that he never lost sight of the fact that he was a teenager; Anthony’s portrayal is in line with that direction. Merritt David Janes plays a realistic and empathetic Carl Hanratty, the FBI agent chasing Abagnale Jr. and who gives him a job after his time served. The final scene between the characters is touching, even more because the two became close friends and integral parts in each other’s lives in real life.

In his Q&A after the show, Abagnale Jr. said that when his sons watch the movie or see the show, they aren’t fully able to comprehend their father as the character on stage—that they can only judge him based on the father that he is to them. The entire show, knowing that Abagnale Jr. was in the audience, I tried to imagine what it was like for him watching his life being acted out in some flashy dance number. The cynic in me thought it was kind of ridiculous—the showiness seemed to trivialize what Abagnale Jr. went through. (It’s not portrayed in the musical, but he spent a hard six months in a French jail.) And to some extent, it does. But not every detail in the movie and musical are true, and Spielberg was candid with his changes with Abagnale Jr. in the making of his film, who was also candid with us. What I’m trying to get at is when a true story requires a suspension of disbelief, it’s a little more difficult to give in so easily.

Upon hearing the news from Spielberg that he had given permission to make his movie into a musical, Abagnale Jr. said, “Really, a musical?” Admittedly not being a patron to many Broadway productions, the thing that Abagnale Jr. wanted to leave us with was the awe he has for the singers/dancers/actors who bring his story to the stage. It must be surreal for Abagnale Jr. to see his story acted out in such a way, and it must be damn flattering for the cast to be praised by the man who started it all. I can only imagine.