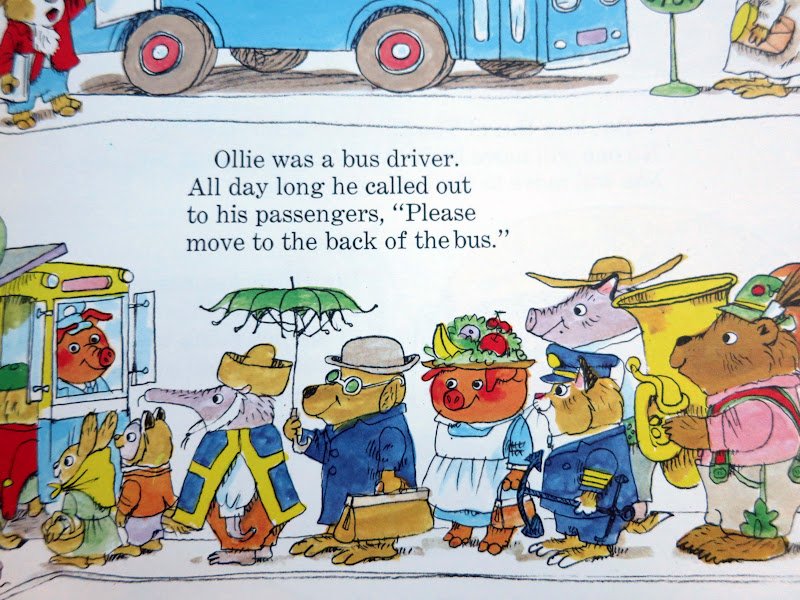 One of the book scenes on which Busytown: The Musical is based. Illustration by Richard Scarry.

How do you express appreciation for a performance that you see? The Greeks of classical antiquity clapped at theatrical performances, certainly, but also shouted, stamped their feet, hissed, and hooted–both to show approval and disapproval. The ancient Romans were more likely to snap their fingers or wave part of their togas when at the arena; for a play, they normally withheld their acclamation until the phrase “Valete et plaudite” was intoned, indicating that the performance was over. In other contexts, silent appreciation was more of the norm–as accurately depicted in Sofia Coppola’s Marie Antoinette (2006), where the Austrian princess-cum-French queen discovers that applauding was a distinctly foreign concept at the royal opera house. In Deaf Culture, a common practice is to show appreciation by raising hands, stretching out the fingers, and quickly twisting the wrists. There are myriad ways of showing appreciation, some driven by ability (few of us can muster the toga wave outside of Halloween and select college parties) and some by convenience (e.g., orchestra musicians stomping their feet because their hands are full).

This is Part Two of a series on autism-spectrum disorders and the theatre. You can read Part One, “Sensory-friendly performances coming to Minnesota theatres,” online.

The patrons of the Children’s Theatre Company at Busytown: The Musical on Friday night used a variety of different types of applause. Some were children, some adults, some normative, and some drawn in some way by the production’s specially crafted, sensory-friendly performance. Many bouts of applause were delivered spontaneously in the middle of a song or scene, much like interruptions at the President’s State of the Union address. When appreciation overflowed, it manifested in whatever channel of communication was comfortable or available–sometimes verbal, sometimes non-verbal, and sometimes both at the same time–as in a few cases when attendees became so excited that they ran down the aisle, shouting. (The show, as it must, went on without so much as a stutter.)

The name Busytown may seem at first antithetical to the idea of a sensory-friendly performance that tries to not overstimulate patrons, but the title actually refers to the celebrated children’s books by Richard Scarry. This world of anthropomorphic animals is populated by beloved characters such as Huckle the Cat, Lowly Worm, the cocker spaniel Sergeant Murphy, and Betsy Bear. These are the sort of instantly enchanting characters that have children crying out in excitement when a book is opened or a Gold Bug spotted in the corner of a page, and that leads parents to create commemorative Pinterest pages when they become empty nesters. Unsurprisingly, this carried into the theater as well, with a wide spread of ages expressing their excitement in verbal and nonverbal ways, especially at the show’s pickle car.

One of the interesting facets of communication disorders is in how gaps are bridged. When a particular word doesn’t come to mind, for example, the concept or feeling can be still expressed using the closest approximation–in some cases, the name of a character from a favorite movie, pointing repeatedly at a picture of a liked object, or squeezing rapidly on a hand or fidget. Although the exact reactions differed in Friday’s performance, excitement clearly reined. The length of each act seemed about perfect for allowing time to rest and destimulate; most of the audience stayed in their seats the entire time, without needing to step out for a break or avail themselves of the Quiet Room made available. This by itself seemed a treat for the parents and caregivers in the audience, who seemed much more relaxed themselves than when they’d entered the theater.

Check back for Part Three of this feature, which examines current and research on using theatre to teach communication skills to persons diagnosed with autism-spectrum disorders.