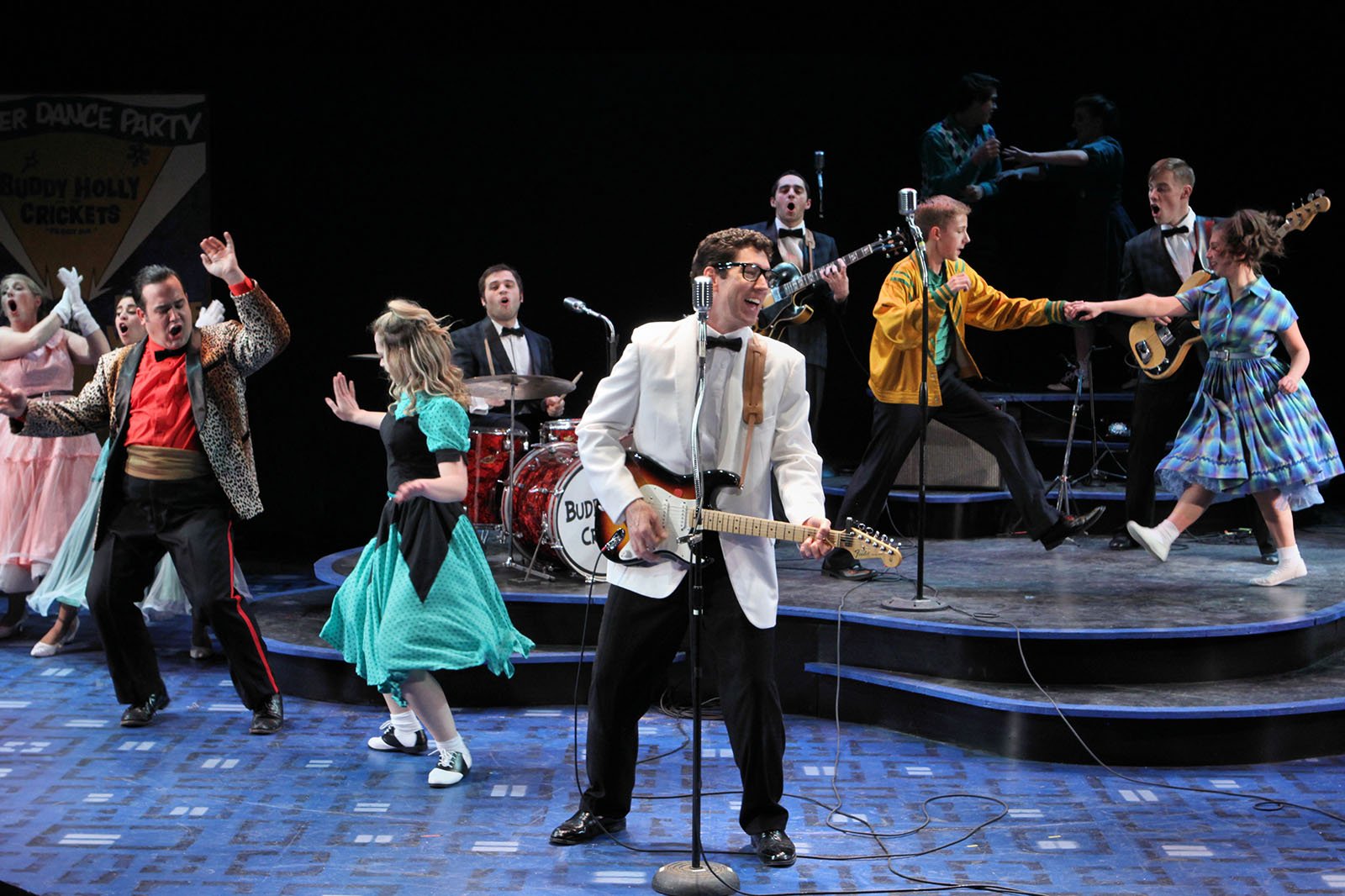 I missed the first two times that Buddy—The Buddy Holly Story played at History Theatre, but I had heard it was a lot of fun.  On its third go-round, I made a point to finally catch it and I can confirm that this show is great fun. History Theatre is co-producing this Alan Jane’s play with the McNally Smith College of Music. Director Ron Peluso and musical director Gary Rue provide an entertaining production that seeks more to recreate the early excitement of rock and roll rather than to simply tell a rock biopic.

Buddy Holly was a country singer who in 1956, at the age of 19, switched to rock music with his own original compositions. He succeeded in exciting a generation with his music. He shot to stardom rapidly and he had a series of hit songs before his career and life was cut short by a plane crash. Along the way, he challenged the limited thinking of record producers, had a falling out with his original band, The Crickets, and married. The best moments in the show are when the cast plays full-length versions of Holly’s songs. Although I have always been aware of Holly’s songs, hearing them performed in this production provides a new appreciation and understanding on how Holly’s music directly influenced other artists, including the Beatles.

Nicholas Freeman, a talented singer and musician, succeeds in capturing the essence of Holly in the musical numbers. He is joined on stage by other remarkable musicians as his band members, including Ryan Janssen and Zac Spicer.  Most of the action in the play centers around two performances given by Holly. The cast makes great efforts to transform the show’s audience into the audiences for these two famous performances.

The first performance involves Holly and his band’s concert as the first white group to play at the famous Apollo Theatre in Harlem. Although Holly’s songs are impressive, the highlight of the show was the energetic musical number “Shout” performed by Lynnea Monique Doublette and Munyaradzi Tirivep. The second performance was Holly’s final concert at a ballroom in Clearwater, Iowa, just before the fatal crash. Holly shares the stage with two other musical legends who died with him in the crash: J.P. Richardson (“The Big Bopper) and Ritchie Valens. Both Brant Miller as the Big Bopper and Allen P. Malicsi as Valens make the most of their time performing. This show’s emphasis on this nostalgic music delighted the opening night audience.

A highlight at the beginning of the show was a soloist singing the first verse and chorus from the Don McLean’s song “American Pie,” a song that characterizes the death of Buddy Holly as “the day the music died.” It was a bittersweet opening and my only disappointment was that it was not reprised at the end when Holly’s death is announced.

Real life history interjected itself on opening night with the presence of another legendary performer, Bobby Vee. Vee had a string of musical hit songs in the 1960s. Ironically, when Holly’s plane crashed, he was on his way to play a concert in Moorhead, Minnesota. Vee was an unknown 15-year-old singer and his band had the difficult task of subbing for Holly that fateful night.