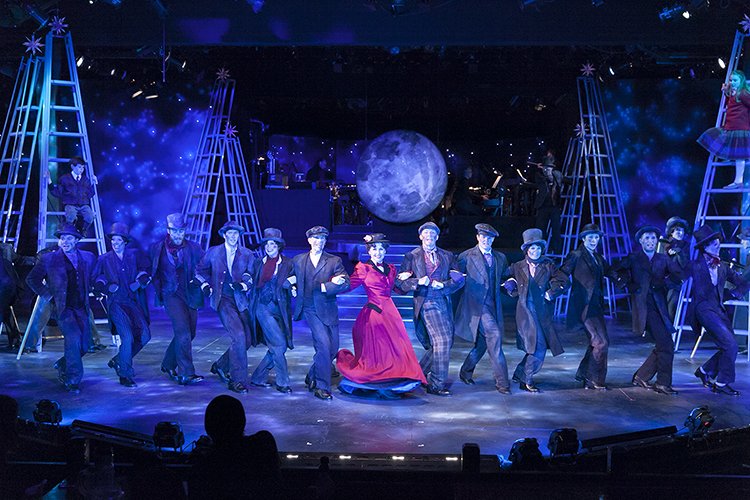 Ann Michaels and the cast of Mary Poppins enjoy a moonlit dance in "Step in Time." Photo by Heidi Bohnenkamp

Sunday, March 15, 2015 marks the five-year anniversary of Chanhassen Dinner Theatres’ current ownership. Half a decade ago, a consortium of investors led by Michael Brindisi, Tamara Kangas Erickson, and Steve Peters teamed up to buy one of the nation’s largest and most prominent Equity dinner theatres. Area residents and patrons were not exactly disinterested observers: not only was CDT a storied local and national theatre icon, but also a cornerstone of the local economy with almost three hundred people on staff. The new ownership also faced steep financial pressures from the beginning, taking the reins at an institution that had financially stumbled in recent years as theatre attendance in general and dinner theatre attendance in particular tumbled during the economic recession. Brindisi and Kangas-Erickson’s artistic credentials went without question, but did their team bring the business acumen necessary to revive the storied theater?

Five years later, the answer to this question is a resounding yes. Brindisi, now President and CEO, has led the company through an artistic and financial renewal – a success easily viewable in the box office returns for the last two seasons. 2013’s mainstage production of Fiddler on the Roof smashed the company’s sales records for a fall production, a milestone that 2014’s Hello, Dolly! breezed past with aplomb. The extended spring-summer run of Little Mermaid in 2014 put both to shame; if advance sales for 2015’s Mary Poppins are any indication, CDT is set to break yet another of its records. The company has even secured its financial footings by buying the land on which the theatre complex stands, armoring itself against reactionary rent increases by a third-party landlord.

So what are the secrets behind this success? For a few guesses, hop on over to Mary Poppins to see how practically perfect things get with dinner and a show. As you enter the theater, unfurl your umbrella and ride the breeze down over the aroma of potato-encrusted cod or a Chicken Chanhassen. There’s plenty of time to eat, but not so much that a food coma can overtake you before the show drives all thoughts of sleep from your mind. (If you’re susceptible to post-dinner naps, try the pecan-crusted chicken salad, which is laced with mandarin oranges, strawberries, and Ambalu blue cheese instead of more carb-laden fare.)

The staging of Mary Poppins capitalizes on using subtle stage effects to create a world laced with magical realism. When Mary Poppins (Ann Michels) pulls a long hat stand from her much smaller handbag, one’s mind goes into overdrive to try and figure out how the trick was accomplished – but only for a short while, as there’s plenty of other things going on to catch one’s eye and ear next. This leaves a whole pile of staging pieces and effects to discuss during intermission, on top of the sterling performances. Is that a trap door on stage there? How long was it before you realized that that statue would come to life and dance and sing? What do you think of the new songs written for the stage musical, and how did the older songs’ rendition compare with Julie Andrews and Dick Van Dyke’s hallowed renditions?

Mary Poppins marries a mix of nostalgia and fresh air in a formula that seems to have worked particularly well for Chanhassen. It also has some added elements from the original books by P.L. Travers, rewarding children (or their parents) who do a little reading before coming to the show. This gives the stage Mary Poppins more of an edge than Andrews’s film rendition, but by the time the show’s over Ann Michels will have made you forget all about that other actress who once played a nanny extraordinaire. This Mary slips in one-liners, has a bit of a mischievous streak of her own, and enjoys a pseudo-romance with Bert (Mark King). Michels and King make a fine pair, with nuanced acting and richly shaded singing.

This story is about more than just the titular character, however, and there are two other couples of sorts with lots of stage time: the Banks children and Mr. and Mrs. Banks. Keith Rice shines as Mr. George Banks, stretching dramatic muscles less exercised in his last few roles at CDT; although her part isn’t written out as fully, Janet Hayes Trow’s performance as the oft-conflicted Mrs. Winifred Banks was touching and musically memorable, especially in “Being Mrs. Banks”. The child actors playing Jane and Michael Banks at the premiere, Isabelle Erhart and Jay Soulen, give respectable performances as the pair of scamps.

A highlight of any Chanhassen production is when the action spills into the house. Tamara Kangas-Erickson’s choreography does so judiciously, but the way that numbers like “Jolly Holiday,” “Supercalifragilisticexpialidocious,” and “Step in Time” spill across the stage is thrilling and always engaging. Throw in a strong supporting cast, touching solo songs like “A Man Has Dreams,” and tinged duets like “Feed the Birds,” and you might just find yourself coming back to Cherry Tree Lane for a reprise.