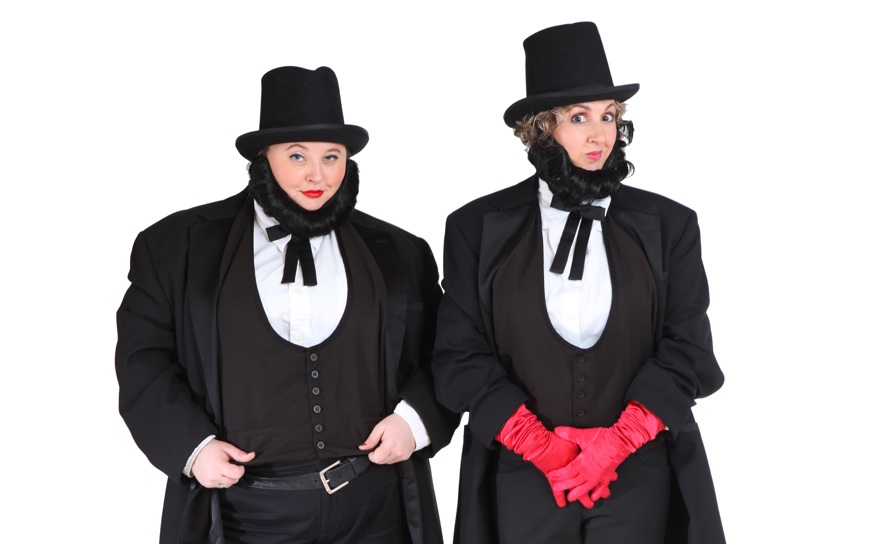 Babe Lincoln and the Vajazzled Badge of Courage opened February 1 at the Brave New Workshop. The talented duo of Lauren Anderson and Katy McEwen wrote, directed and performed in this two-woman review. The title conjures images of Abe Lincoln (the skit with President Lincoln lasts for only a few minutes), but the show is actually targeted as a “girls night out,” but has humor that works for both genders. Although the show has definite high points, it is not up to the usual Workshop standards.

Among the highs are some sharply tinged political skits. The show starts out with a very hilarious rap ode to pantsuits and Hillary Clinton. The political humor continues with some very funny scenes about women through history. The funniest was a moment of improvisation by the two performers necessitated by an unexpected “beard malfunction” experienced on stage by McEwen. However, the humor hit a brick wall when the “women of the future” skit concluded with the not-so-original revelation that women can be as evil as men.

One of the more clever non-political skits involved a dialogue between a pair of out-of-style sweat pants and a pair of trendy yoga pants. One of the more interesting skits was the PowerPoint devoted to making “men cry.” It repeatedly showed images, such as abused animals showcased in the Sarah McLachlan’s Angel music commercials, in a vain effort to pull on the heartstrings of the men in the audience. The performers appropriately announced that they decided against showing photos of the Holocaust to accomplish this task.

Unlike the usual high quality of Workshop productions, the show’s skits fail to be consistently hilarious. Several skits fell flat or went on too long. One skit involves a mother showing up at her lesbian daughter’s home after defeat of the Minnesota anti-gay marriage amendment, now wanting to plan her daughter’s wedding to her live-in partner. Even after the daughter points that defeat of the amendment did not make gay marriage legal in Minnesota and that she does not want to get married, the skit continued. Another skit concerned the so-called “war against women” in 2012. In a spoof of the recently passed Arizona statute which recognizes personhood at the moment of conception, Anderson portrays a hapless woman who is taken into “protective custody” until she is passed menopause. The continuing skit about two girls at a slumber party had only a few funny lines, with the best one being that the girls were “shocked” to learn that phones were once connected to houses.

Even with some lapses in laughter, Babe Lincoln is sufficiently humorous to make it a pleasant evening for both sexes. Some might detect a vague similarity to the feminist humor of the At the Foot of the Mountain Theatre, which operated in the ‘70’s and ‘80’s.  It’s to Anderson and McEwen’s credit that they realized that the themes related to the issue of women’s equal rights are still relevant for today’s audience