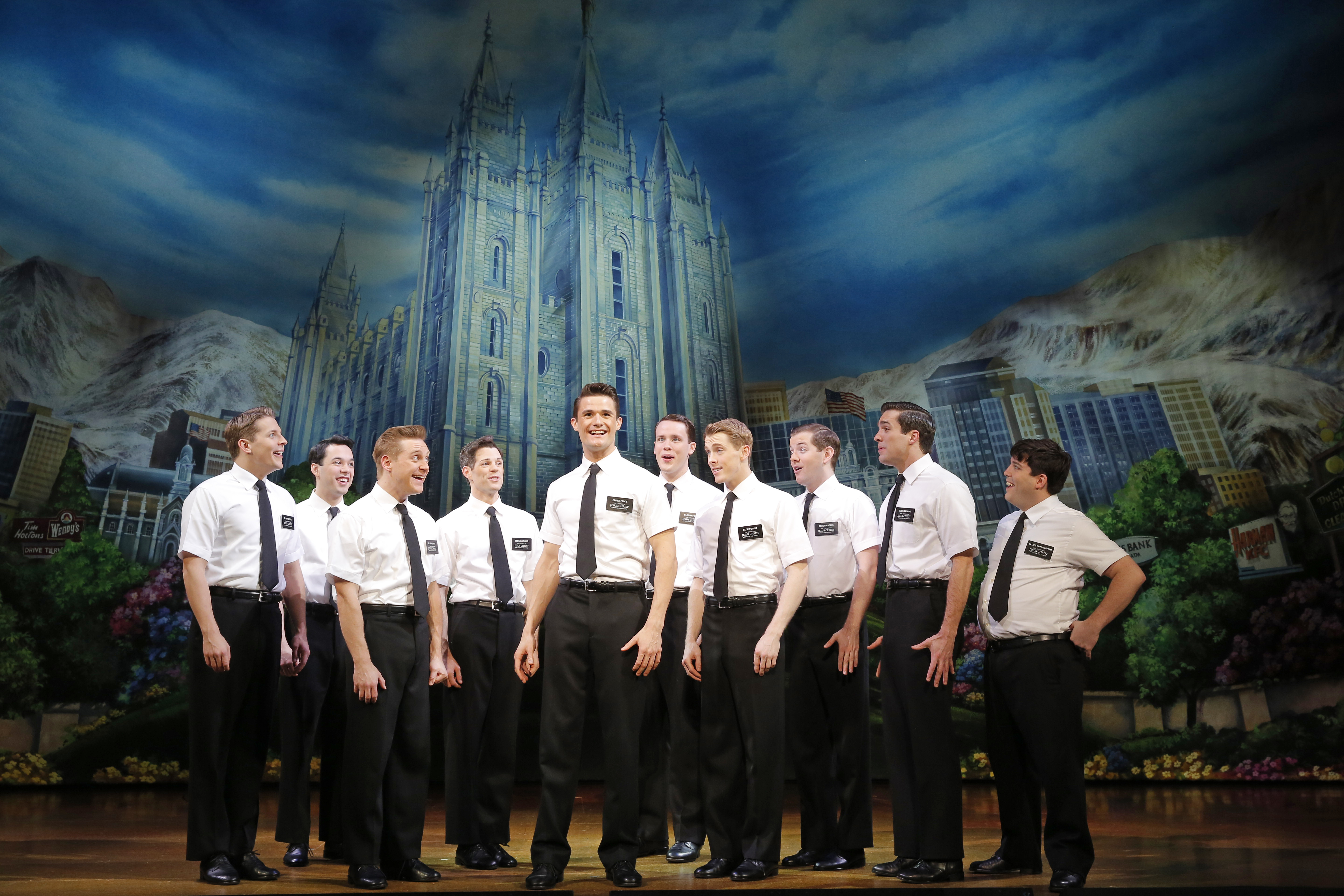 Getting a ticket to review The Book of Mormon at the Orpheum Theatre on Wednesday, February 6 was like getting a golden ticket to Willy Wonka’s Chocolate Factory. “We bought our tickets a year ago,” an acquaintance of my friend told us. People filled the halls before the doors opened at 7 p.m., anxious to get to their seats. The half hour before the show started, people had their phones out, taking pictures of their tickets and selfies in front of the cloud backdrop (probably sharing it on Facebook to make friends who couldn’t get a ticket jealous). There’s a lot of hype surrounding the show by the creators of South Park, and judging by the reception of the bathroom humor, Star Wars and Star Trek references, irreverent religious commentary, the show didn’t disappoint Wednesday night’s crowd.

The story revolves around two green Mormons sent to Uganda to fulfill a two-year missionary requirement after their stay at the LDS Church Missionary Training Center. Elder (Kevin) Price (Mark Evans) is the shining star of the Mormon group who’s excited to spread the word of not only his faith, but also of himself. When the self-serving Elder Price learns he’s going to Uganda (“Where’s that?” one of them asks) instead of Orlando, Florida as he had prayed for and paired with the self-proclaimed follower Elder (Arnold) Cunningham (Christopher John O’Neill), he’s momentarily put off. Reassured by the promise that he will get everything he wants in the after-life if he does a good job, Elder Price dives in head first with his more-than-willing sidekick Elder Cunningham (“You and Me (But Mostly Me)”). As you can probably imagine, Uganda isn’t exactly a prime spot for Mormon conversion. The Uganda people, who are dealing with AIDS and a warlord whose mission is to circumcise all females, have bigger crosses to bear, so to speak.

As much as it is about religion, The Book of Mormon is the tale of an underdog. Elder Price and Evans have the look and winsome personality of being the star of the show. When Elder Price watches as the warlord shoots one of the village people in the head, he runs to request a transfer to Orlando and it’s Elder Cunningham who steps up to the plate (“Man Up”); the ungainly outcast Elder Cunningham and O’Neill steal the shows (both in the story and on stage). Another strong number for Elder Cunningham and O’Neill is “Baptize Me” with Nabulungi (Samantha Marie Ware)—and as in any good religious parody, the song is not-so-subtly sexual. In his program bio, O’Neill says that this is his professional debut. Not only does it not show, but there were surprised mumblings amont the crowd at the intermission at the fact.

The production as a whole is extremely well done, from the choreography to the lighting to the music. The ensemble is hysterical and unequivocally talented at once. Namely, Mike McGowan as Joseph Smith and Grey Henson as Moroni and Elder McKinley (“Turn It Off”). And “Spooky Mormon Hell Dream” is as awesome and hilarious and it sounds.

The Book of Mormon wasn’t as big a bashing to the religion as I was anticipating (operative word being “as.”) The faith undergoes more scrutiny than any other religion—there’s John Krakauer’s Under the Banner of Heaven, HBO’s Big Love and the magical underwear made famous by Mitt Romney to name a few mainstream media examples of non-Mormon’s obsession with the religion. “I Believe” recounts all of what Elder Price believes as a Mormon, and as ridiculous as the lyrics sound (“And I believe that in 1978, God changed his mind about black people!/You can be a Mormon/A Mormon who just believes!”), the writers didn’t do too much creative brainstorming here because it’s just simply what the Mormon faith is, and in this lyric what actually happened. But when the play wrapped up, the message seemed to be more of a statement on not only the power of all religion, but that people are willing to believe almost anything if there’s something in it for them in the end. And why not?

I wouldn’t recommend this play to everyone. Some people don’t like bathroom humor. Some people won’t like laughing at religion. While at times it feels insensitive to be laughing in the context of a warlord who wants to mutilate girls and a man who believes he can cure his AIDS by raping babies—and we shouldn’t be laughing just because they say a funny swear word—I don’t think it’s the intention of the show to make light of those circumstances. There’s a fine line in a satire like this. And because it’s a satire done well, there’s a message in the joke.

So I say, “Go” if you know what to expect. And if you can’t get a ticket to this short run in Minneapolis, I heard the production in Chicago has been extended.

Read Morgan Halaska’s review of Catch Me If You Can at the Orpheum Theatre (December 2012).