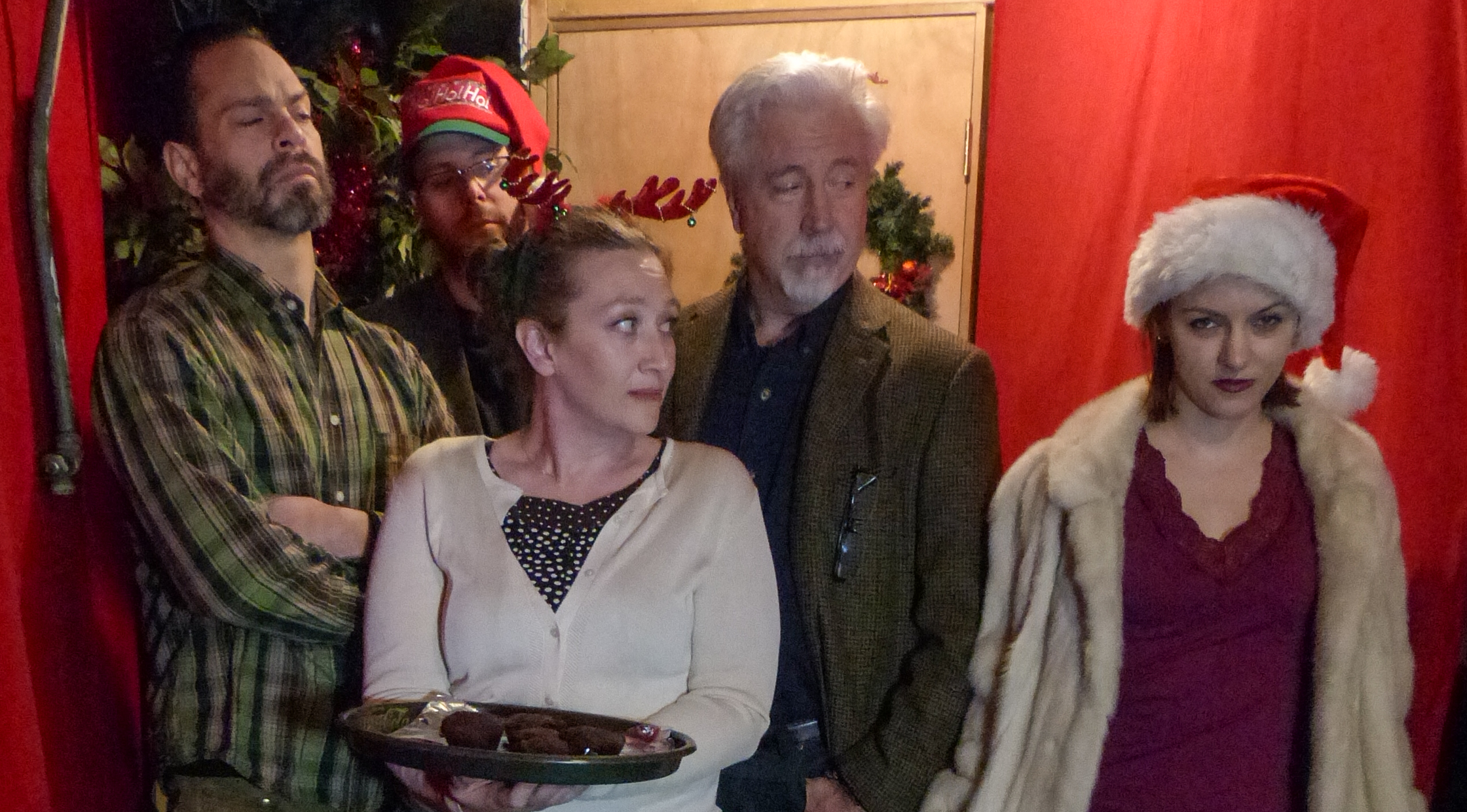 If you like your holiday family entertainment named after strip clubs, have Hey Rube and Killing Joke Productions got a play for you. It’s called The Booby Trap. Now, when I say holiday family entertainment, I mean that it’s entertainment that’s set around a holiday (in this case, Christmas time) in which a family is present. This is not a play you bring grandma or the kids to see. Not that there’s anything highly outrageous going on—oh, there’s a fair amount of swearing, alcoholism, depending on your tolerance level—blasphemy, and a costume for one of the actresses that doesn’t leave a lot to the imagination. But no violence, and while the comedy is certainly on the dark side, it’s by no means pitch black. The Booby Trap is, however, a play that prompts discomfort. For every audience member who was laughing throughout the new one act play by Marcus Anthony, there were also folks like me sitting there thinking, “Man, this is one sad comedy. I feel really bad for these people.”

“You’re sober. In our family that’s almost a super power.”

Mother Marcy Doherty (Sarah Broude) wants nothing more than her whole family together for a Christmas dinner, whether that’s a good idea or not. Her sons don’t believe that their dad, Franklin (Douglas Stewart), has turned over a new leaf, stopped drinking and become a regular churchgoer. The supposed good responsible son, Kieran (Matthew Kelly), makes a great show of grudging participation in the festivities, even though he’s the first to arrive. The more troubled son, James (Greg Hernandez), arrives with Zina Marina (Victoria LaChelle), his pregnant stripper fiancee, in tow. Zina is a friend of the whole family, however, since she works in the much mentioned neighborhood strip club The Booby Trap. There may be a question as to which of the three men present might be the father of the baby, though it’s implied that they’re certainly not the only candidates. There is also much discussion of dad’s pension, and who’ll get the benefit of it, though it doesn’t seem as though dad’s health is in question, so no one should count on an inheritance any time soon.

“Is it really drunk driving if there are no keys in the car?”

Strangely, it feels like director Paul Von Stoetzel and the cast have chosen to stage Booby Trap as more of a drama than a comedy. Though many of the issues involved are no laughing matter, the script as written seems to want to a be more manic and wacky than the production is allowing. The pacing often seems more labored than it might need to be. For instance, the running gag that every time Kieran wants to step out for a cigarette there’s someone at the door who prevents his exit, most often his father, gets lost in the general sturm and drag.

On the flip side, the dramatic moments are often more successful given this approach. For example, there is nothing sadder than poor Marcy finally joining the family penchant for downing alcohol (offstage) and returning a bit dazed but artificially much happier that her whole contentious family is gathered round the dinner table together. Also, the men seem to come off better in this dramatic presentation style, though they’re hardly saints. A lack of comic zing makes it all the more obvious that the only two women on stage are a long-suffering nag, and an opportunistic whore. Though Broude and LaCelle do their best to flesh out these standard tropes and their portrayals are far from one-dimensional, it’s hard fighting against the weight of those stereotypes. Maybe that’s just holidays in this particular family, but it’s a little disheartening.

“Lucky for her, the archbishop was resigning and I didn’t want a scene.”

In its own way, The Booby Trap still achieves the kind of subversive anti-sentimental holiday family play feel that it’s aiming for. It also somehow avoids the easy trap of just being cynical or one-sided. In the end, the whole family, imperfect though it is, is still gathered together around the table breaking bread as a unit. That may be the most subversive trick of all. That final moment isn’t sappy, but it’s also not bleak. Sure, the one son is an atheist, and religion gives the others rules to fall short of just as it much as it brings them comfort, but it’s not an anti-religious play.

“Are you coming to the intervention?”
“Dinner!”

The script is also admirably lean. It doesn’t overstay its welcome. It doesn’t repeat itself or beat any of its jokes into the ground. It respects the audience enough to figure they can follow along without having to have everything handed to them. As much as the dramatic bent of this production sometimes fights the comedy inherent in the text, that does spare us from the opposite problem of people straining too hard to make everything funny. A middle ground that embraces the comedy a little more openly might be preferred, but the production is what it is. The characters have complexities that are never fully resolved, but also don’t leave the audience frustrated for lack of information.  I’m not sure if it’s a new holiday tradition or anything (the makers of The Booby Trap would probably balk at the very notion), but any play that leaves a character handcuffed to a dining room chair to navigate curtain call at the end of the night can’t be all bad.

If you’re looking for a short night out and a holiday play you haven’t seen a million times before, you might want to give The Booby Trap a try.