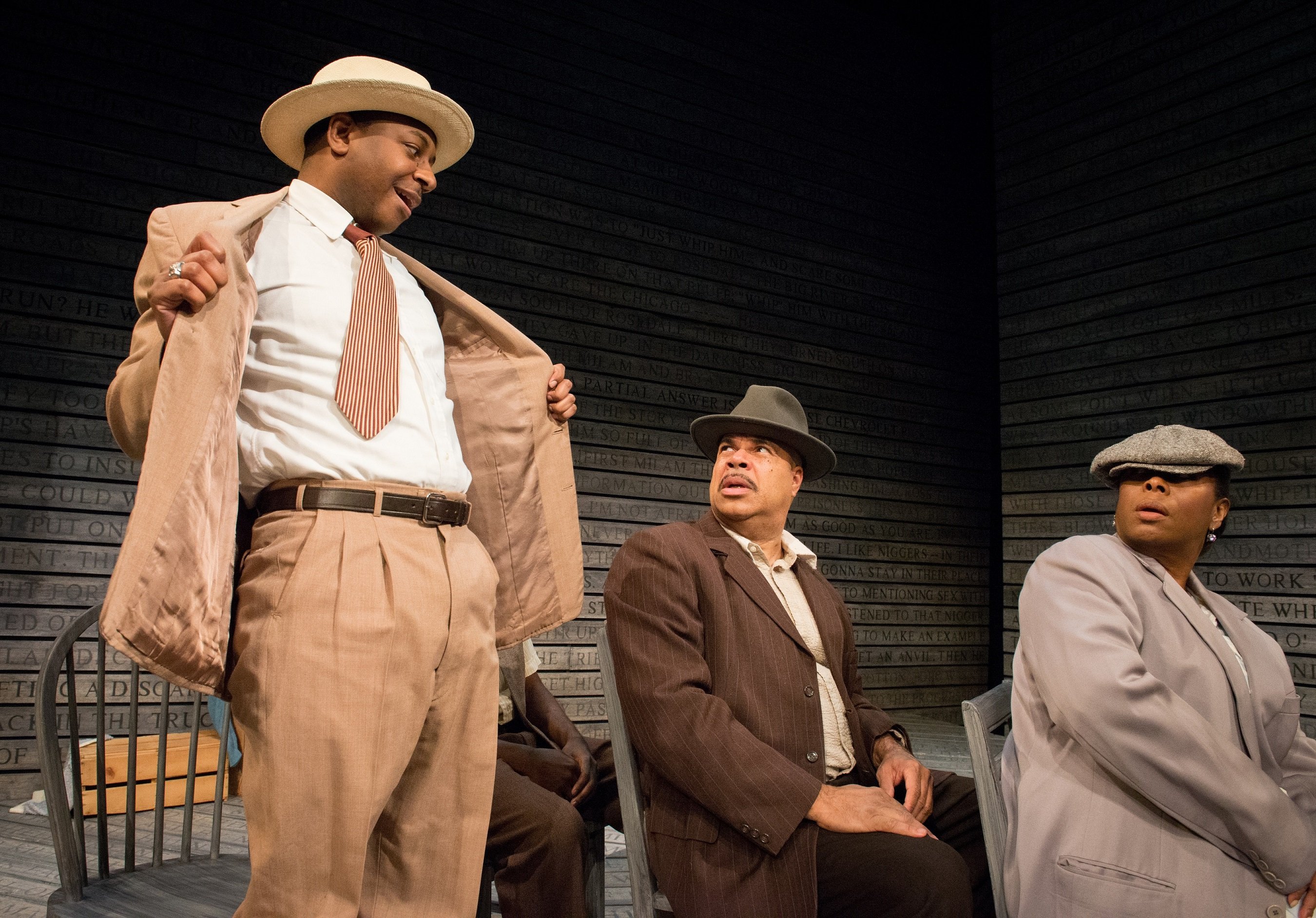 When James Joyce wrote his short story The Dead, he describes Lily, the caretaker’s daughter, as “literally run off my feet.” This inexact and incorrect phrase accurately pinpoints her harried point of view and she very briefly has control of the story. The problem with Emmett Till, the 14 year old black youth murdered in Mississippi by vicious racists in 1955, is how to allow him to control his story.

Penumbra Theatre embraces the impossibility in The Ballad of Emmett Till. “My life was short, but not uneventful,” brags the happy voice of Emmett Till. It succeeds in finding a form that will capture and represent and echo his youth through a playful theatricality: a few chairs morph into a car shaking across Mississippi backroads; the cast briskly inhabit many roles; he poses in his sharp suit like a young lion. Yet the play also evokes a mythic context. A repeated motif is the gospel chorus rising in haunting lament and the need to “beat the water for snakes in Mississippi.” Till is haunted by dreams, possibilities, energies but cries out in the end: “I can’t be dying! I’m a seeker.”

Ifa Bayeza’s play The Ballad of Emmett Till, directed by Talvin Wilks and featuring Darrick Mosley in the title role, is determined to show and celebrate “talk, talk. . . Negroes love to talk” with overlapping voices, choruses of song, and despite his stutter, the exuberant crowing swagger and energy of young Till. The inevitability of his doom provides the motor momentum of tragic irony through the episodic whirligig of adolescence.

Till was deprived of his voice. The play will restore it. The production covers the planked stage with the unrepentant words of his killers. They walked free of any charges and gave a candid interview to Look magazine in 1956. The set suggests the shed where he was murdered and their stenciled words counterpoint his rambunctious and joyous voice.

Till is a permanent landmark figure in the history of the Civil Rights Movement and is thus in danger of being overly sanitized or abstracted into an icon. The playwright understands that her mission is to restore a fully human presence. In this she succeeds.

When overcome by nerves, he whistles to restore his confidence. Ironically, it is this conjuring-of-confidence through a whistle that marks him out for torture, mutilation, and murder.

His backstory is carefully constructed. His father died in World War II. He is visiting relatives in Mississippi from Chicago and despite the warnings of his family, his adolescent exuberance, his joyful life force presumes he possesses the immortality of youth. This is another irony carefully underlined in this production. He will attain a permanent immortality but it will be as a sacrifice.

The multiple role playing of the all black cast – shifting gender and roles and races as needed – increases the poignancy of the gathering horror. Their metamorphoses mirror and anticipate the metamorphosis of the shining youth in his sharp suit into a mangled stripped corpse.

Till is never a ghost. It is his life force that haunts. Like the doomed youth, Michael Furey, in Joyce’s story, the conjuring of Emmett Till and singing his spirit home in grief-wreathed celebration allows a healing gesture to be made. A great cathedral of song rises over the memory of his beaten corpse. This weeping edifice of song is never forced or sentimental. It is austere, impassioned, and soul nourishing.