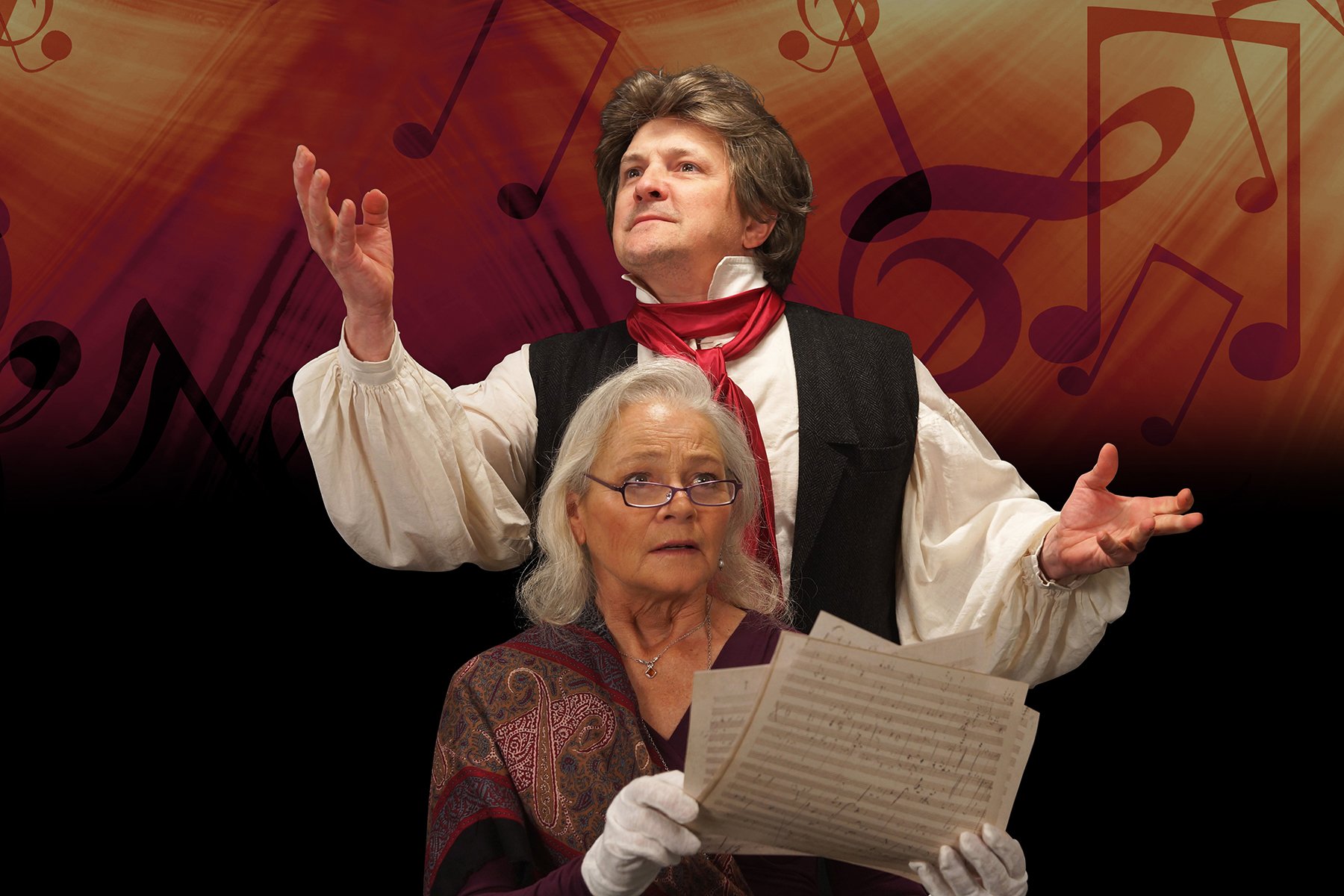 There are few times when a play production achieves true theatricalism. But Park Square Theatre’s production of 33 Variations accomplishes this elusive target in its crescendo scene during the half-way point of the show. This scene, alone, renders this production worthy of both your attention and attendance.

Moisés Kaufman’s play centers around the question of why the famous classical composer Beethoven became obsessed in the last four years of his life with “The Disabelli Variations” which were based on a mediocre waltz written by music publisher Anton Diabelli. The less-than modest Diabelli requested that the 50 greatest composers in Vienna submit their own variations on his waltz to be published in one book. Instead of providing one variation, Beethoven delayed some of his greatest compositions, including the Ninth Symphony, to write a total of 33 variations over a period of four years.

Kaufman’s play interweaves two parallel stories with overlapping themes. This first story centers on Dr. Katherine Brandt, a professor of music, who is facing the end of her life and seeks to devote her remaining time to discover why Beethoven was obsessed with these variations. Recently diagnosed with ALS, or Lou Gehrig’s disease, she travels to Bonn, Germany, and spends her days at the Beethoven Archives studying Beethoven’s sketches of these variations looking for insights. By doing so, she leaves unresolved issues with her adult daughter who is hurt she is choosing not to spend her remaining days with her family. But eventually her daughter and her daughter’s boyfriend, who just happens to be a nurse, follow her to Germany to be there for the end.

The second story tells about Beethoven’s final years when he is struggling with both deafness and health issues as he works on the variations. His personal secretary, Anton Schindler, is devoted to doing what is necessary to help Beethoven succeed yet is exasperated with his master spending time doing the 33 separate variations while his more significant work is uncompleted.

Finally, a constant presence on stage is pianist Irina Elkina who stunningly plays the variations as they are composed or studied in the drama. Scenic designer Rob Jensen and Projection Designer Todd F. Edwards successfully integrate visuals of Beethoven’s musical sketches and notes into the production’s design. These visuals, along with the actors’ narration, provide a fascinating analysis of Beethoven’s music that even I could find understandable.

Director James Rocco does a masterful job of weaving the two storylines with the pianist. The play reaches its highpoint in a scene where Beethoven is directing the pianist in one of his variations and Katherine’s character, being treated for ALS, is woven into the action. It is at this point when the “moment” becomes more important than any storyline or analysis.

Karen Landry gives a commanding performance playing the strong-willed Dr. Brandt who can never understand why anyone, especially her daughter, would settle for less than attaining full self-actualization. Edwin Strout plays a disheveled, at times manic and often comical Beethoven.

Strong performances are also provided by the supporting roles. Michelle Myers does an effective job of playing the Beethoven scholar who is initially skeptical of Brandt, but who later joins her in her quest. In the end, she takes on the role of an angel of mercy. Jennifer Maren as Brand’s daughter Clara and Nate Cheeseman as her boyfriend have a great chemistry in their scenes together. Robert-Bruce Brake as Beethoven’s devoted secretary Schindler and Peter Simmons as the publisher Diabelli provide much of the play’s humor through their interactions.