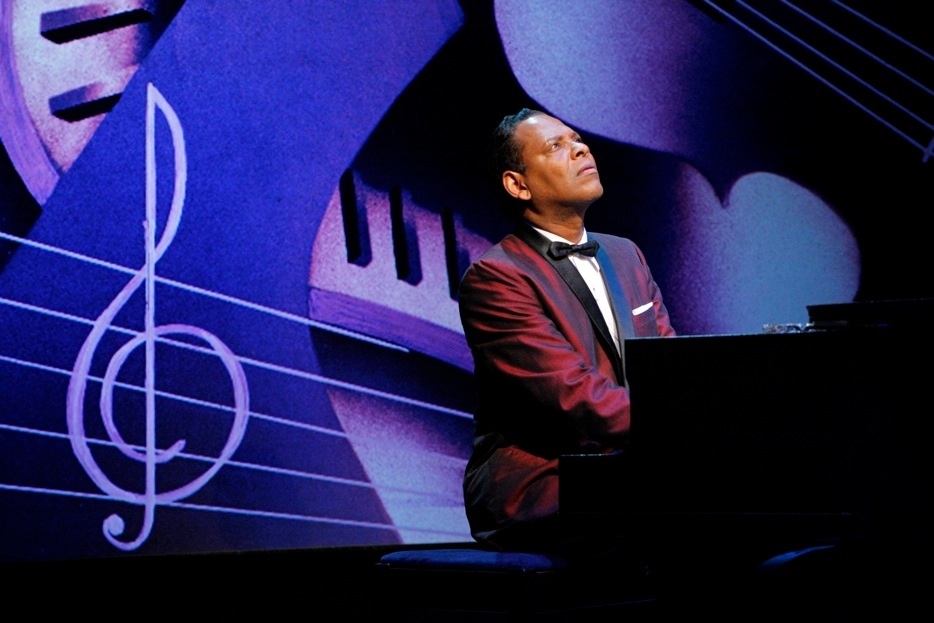 This weekend, Penumbra Theatre brought back its extremely successful production of I Wish You Love about Nat King Cole and the early days of broadcast television. Written and developed by Dominic Taylor, the show celebrated its world premiere in its spring run at Penumbra and played to sold-out performances at the Kennedy Center in Washington, D.C. before occupying the Hartford Stage in Connecticut. Having heard rave reviews about the original production, I was disappointed last spring when I learned it was sold out. My opportunity to see it finally this last weekend proved to be well worth the wait.

Most people know Nat King Cole for his popular songs like “Smile,” “Walking My Baby Back Home,” and “Mona Lisa.” Cole’s musical variety show aired between 1956 and 1957, and despite the popularity of the show, NBC kept shifting its time slot; I Wish You Love portrays how Cole repeatedly found it necessary to thank his television audience for tuning in. Because no national sponsor was willing to fund a show hosted by an African-American, Cole had to use his own salary to cover the show’s expenses. He is considered the Jackie Robinson of broadcast television for breaking down the color barrier in that medium.

The play concentrates on the making of the last two episodes of the show. In between these two episodes, Cole and his band members did a six-city tour at the network’s insistence. A show in Alabama resulted in white racists storming the stage to attack Cole and the beating a band member. The behind-the-scenes action at the television show is intercut with a news-anchor character who reports on stories like the desegregation of schools in Little Rock, Arkansas. Video monitors are used frequently to display news clips, musical numbers, and television commercials that feature only white actors.

Although NBC broke ground with the first African-American television host, the show brings to light how Cole had to accept conditions he found repugnant. He was told not to allow black band members to be viewed on television and that such band members had to be segregated even still. Cole also received orders not to touch white performers on camera and he received flack when singer Peggy Lee touched him on the arm during one show.

I was pleased to see that I Wish You Love stretches beyond the biopic format—like the Guthrie’s Ella staged two years ago. This format relies on the performer’s music to tell his/her life story, but, in fact, we don’t learn that much about the details of Nat King Cole’s life or career. What we do learn is a great deal about race relations in post-war America and the discrimination and humiliation that African-Americans had to endure in their efforts to break the racial barriers in broadcast television.

Dennis W. Spears does a masterful job of recreating Nat King Cole’s musical style that features mellow tones and wide vowels. He deftly juggles scenes that contain heated issues that contrast with the ones he is on camera with that signature smile of his. The supporting cast including Michael Tezla as the new anchor/network lackey is just as excellent, and both Jeffrey Prince and Oliver Moore are entertaining as members of Cole’s band.

I Wish You Love would have been sufficiently entertaining with just the show’s 16 renditions of Nat King Cole’s tunes. But the play achieves much more with its thought-provoking context of the racial issues of the 1950s, leaving the impression that these issues are still relevant today.