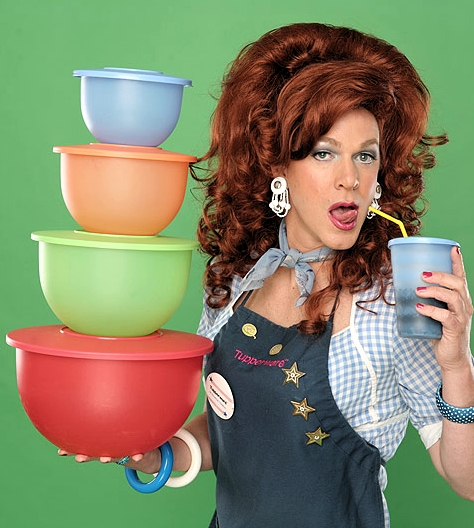 I can assure you that Dixie’s Tupperware Party, happening at the Hennepin Stages through February 28, will be unlike any Tupperware party you have ever been to. Kris Andersson started selling Tupperware in Los Angeles as a way to make ends meet. The character of Dixie evolved as Andersson held more parties. In 2004 Kris took Dixie to the New York International Fringe Festival. In 2007 it was produced Off-Broadway and it began touring in 2008, with Dixie becoming one of the top-selling Tupperware agents in the process.

Dixie Longate is a single mom raising three kids in a trailer park in Alabama. Her probation officer suggested she start selling Tupperware as a way to support them. I have to admit my bias: I love Tupperware and have been to many Tupperware parties. If you have never been to a home party, they always involve a product demonstration, a few games, giveaways, food, and drinks. Dixie offers all that, inviting audience members to come on stage and sit on her couches for the show, going through the audience with her bowl of butterscotch candies and pouring whiskey for herself at the start of the show and sharing a bottle of wine (opened with the Tupperware Corkscrew—Item No. 1254) with one of her on-stage guests later in the show.

And that is where the similarities to my past experiences end. Dixie’s entire show is filled with sexual innuendos and raunchy language. She picks out audience members who she targets throughout the evening. (Each audience member is given a number, which Dixie may call at any time.) Scott, sitting in the front row, who only knew that Tupperware made “bowls” was brought onstage to open a can with the Tupperware Can Opener (Item No. 1289). It was hilarious watching Dixie spew out the rapid-fire instructions and then sit back and watch Scott struggle to open his can of mandarin oranges. A mild-mannered woman in the audience was eventually cajoled into yelling out a profanity that I am sure she had never spoken in her life. A dating couple were teased about their sexual experiences, and several men were given Dixie’s attentions. I was so adverse to being singled out that I told my friend who accompanied me that I was giving her my number if it was called—no way was I going on that stage!

I think what saved the show for me was that in addition to the laughs there was the inspiring story of Brownie Wise, a single mom who brought the home party sales plan to Tupperware. Wise’s ingenious marketing idea was recognized, and she became an executive at the company; ultimately, she became the first woman to appear on the cover of Business Week. Dixie uses Ms. Wise to deliver the message that women can take small steps to take charge of and improve their lives.

The program is not clear about the fact that Dixie is portrayed in drag by her creator and there were some in the audience who did not know that. As soon as the show started you could hear audience members whispering and trying to figure out exactly what type of Tupperware party this was! The show clearly delivered what it advertised: a Tupperware party given by one of Tupperware’s leading salespersons. We each received a catalog and order form and were told that Dixie would be out in the lobby after the show taking orders. It is just that Dixie’s suggested uses of the Tupperware products are X-rated (actually, XX-rated or XXX-rated or…you get the idea). Did you know that the Classic Sheer Midget Set (Item No. 781) works great for making Jell-O shots? And if you want to hear about Dixie’s other uses for Tupperware, you will have to attend the show.