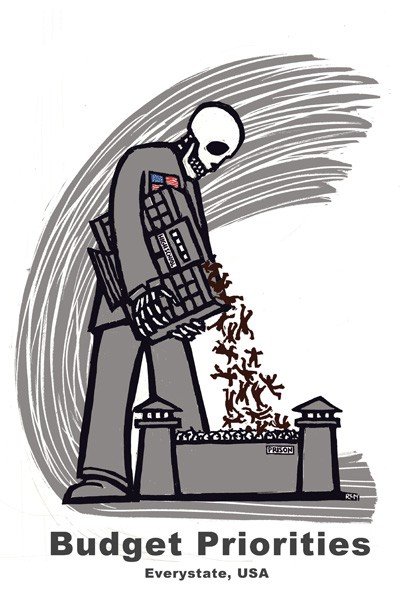 No sooner had the National Rifle Association and its congressional servants raised the call to place armed cops in every school, than videos began to surface of Black students thrown, dragged and beaten by “school resource officers” for such offenses as refusing to put down their phone or getting a drink of water during assembly. While not all schools have armed cops, the trend toward criminalizing childhood for dark children has been in motion for some time. Calling in the cops has become an accepted school response to temper tantrums, arguments and other minor forms of acting out.

While the deputy who threw South Carolina high ­schooler Shakara to the floor has been fired, the chorus of his defenders is right on cue, blaming the victim for her lack of subservience. “We don’t know what happened before the video,” we are told, suggesting that she may have said something, or given the officer a look that would require an explosion of 300 pounds of male rage to correct. White observers, who have only ever experienced the Dr. Jekyll face of the policing duality, have difficulty imagining that the Mr. Hyde face that people of color are always yelling about could be a real thing. If police use extreme force to suppress someone that person must have done something really, really bad.

What’s at stake is the official narrative of the dysfunctional U.S. family. An abusive family relies on its “cover story” to keep its past and continuing history of abuse under a tight lid. Those who push back ­even passively­ are sharply rebuked for “acting out,” “making things up” and upsetting the delicate family balance.

During the time of Apartheid in South Africa I knew a “coloured” (mixed race) man who was attending university in Minnesota. He told me that in the areas he lived, “we didn’t know” about the relentless brutality of the regime toward not only the organized opposition but against the entirety of Black African society. He was a committed opponent system in his homeland when I met him but had only come to understand it since moving away. It struck me as far fetched at the time. How could they not know? But it seems more credible now as I watch the U.S. cover story unravel (every abusive family has a cover story) and see how the white population clings to it ever more desperately. To “not know” is a privilege of those who are treated as human by default.

It was Mr. Hyde who came first. One of the first formally constituted police departments in the U.S. was that of Richmond, Va. It was created out of the white militia that had crushed Gabriel’s Rebellion against the slaveholders in 1800. These first departments would set in place the template for U.S. policing going forward: to punish individual whites if they stepped out of line and to punish all Blacks collectively if any one of them caused trouble. Indeed, to punish Blacks at any time as a warning to keep their heads down.

A society torn between its real story and its cover story is a society under severe emotional and spiritual strain. The larger the chasm between the two, the more the stress shows up as mental illness. The subject must cling to increasingly fantastic narratives to reconcile the truths staring them in the face with the lies that explain and justify the way things are. The very idea that the rules of the system are rigged is so threatening to the white racial self­-image of earned privilege that it cannot be seriously entertained.

So the most deluded segments of US society are insisting on bringing the high­ strung, armed Mr. Hyde into our schools to protect our children from… well, from deranged people. They are totally convinced that he is really the affable Dr. Jekyl. If he throws teenagers across the room, handcuffs kindergartners and marchers hall wanderers off to the slammer, they must really be horrible little monsters. The fired officer, Ben Fields, was answerable to the police chain of command, not the school principal. There are, however, proposals being floated for schools districts to hire their own security personnel. In their excitement these experts further suggest what a great job opportunity this could be for veterans fresh from the killing fields of Afghanistan and Iraq. What could possibly go wrong?

A month after I dropped out of Chicago’s Kenwood High School, a recent graduated student there, back to see friends, was shot down by a Chicago cop working as a security guard. He said the student had pulled a gun. None turned up. Witnesses said the kid was shot from behind as he walked away. That was before cell phone videos. The cop got transferred somewhere. An empire in decline presents particular problems and opportunities. The upward redistribution of resources from poor and working communities to a gluttonous 1 percent leads to several consequences.

One is an increasingly militarized police presence. Another is a ready supply of mentally unbalanced white males with guns barging into schools, self­-medicating for their unbearable feelings of powerlessness.

It is not possible to solve the pressing problems we face and at the same time leave our society’s cover stories intact and in place. We must decide which matters more to us.