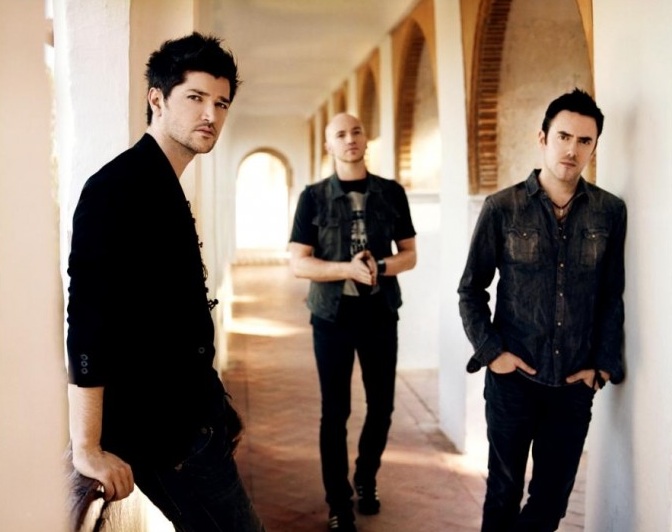 Fans of Irish band The Script packed the Orpheum Theatre Friday evening October 26 and were lucky to be present for one of those shows where you get back what you give. Seems like you hear it at every show, but when charismatic frontman Danny O’Donoghue praised the Minneapolis audience for being one of the best on their tour so far, it was believable. The crowd’s roar was deafening as the band walked on stage to purple beams of light shooting up like searchlights while a bass note rumbled behind recorded words spoken like a breaking news report. The theater felt alive as fans rose to their feet for the opening number Good Ol’ Days, the first track off the band’s third studio album appropriately called #3.

A fancy light show included a backdrop consisting of three panels of white light bulbs that lit up in a variety of ways giving the appearance of light flowing across or dripping down the display. The stage was set up effectively with all three band mates inline near the front for equal visibility. O’Donoghue’s custom keyboard stand was in the center although he was constantly on the move doing an excellent job of making eye contact and pointing to fans in all parts of the theater. Mark Sheehan spent most of the evening near his guitar setup stage right straying to the other side occasionally to rock out with drummer Glen Power who delightfully was not hidden behind his drums as they were setup at an angle so he could face the crowd when singing.

The Script played songs from their entire catalog, the second of the evening being their first ever single We Cry. O’Donoghue noticed a large Irish flag that fans draped over the balcony and cracked a smile before coming down into the audience picking people at random to sing into his microphone “together we cry.” The crowd got even more fired up for current single Hall of Fame, a tune heavy with their style of rap trading phrases back and forth like the Beastie Boys. The studio track was recorded with Black Eyed Pea’s singer Will.i.am, who being a rival judge of O’Donoghue’s on the European version of The Voice was a surprising choice to contribute.

One quality that makes The Script such a great live band is that so many of their songs have an anthem-like hook in the chorus that just begs fans to join in and sing along. That’s just what happened during the title track from Science & Faith. One standout performance came after O’Donoghue remarked, “Last time we played this song here the crowd took over and it would be an absolute honor if you would do so again.” He sang the first few notes from one of their biggest hits The Man Who Can’t be Moved and the crowd did take over in full voice filling up the theater with the infectious melody.

It’s hard to put any one label on The Script’s unique sound, but many influences can be identified. The high energy performance of Talk You Down, had hints of U2 with some guitar riffs resembling the Edge and vocal phrasing very Bono-esq. Sheehan spoke about the band’s love for the US and their extensive travels here in which they have seen much of the country looking out the windows of busses and hotel rooms, something they call the fishbowl effect. This inspired them that evening to dedicate the catchy If You Ever Come Back to the audience.

A short drink break and a few jokes about drunk dialing led into the much anticipated Nothing. A fan in the front row handed her cell phone up to O’Donoghue who proceeded to give the lucky person on the other end a personal concert as he sang the first verse into the phone to everyone’s delight. You will notice this band is also very serious about writing relatable lyrics as heard during the performance of Six Degrees of Separation, one of the best tracks on the new album and already familiar to many fans.

The set ended strong as Sheehan asked the crowd to “raise the roof off on this one” and O’Donoghue appeared at the back of the venue and walked down the center isle singing You Won’t Feel a Thing.  In response to the crowd’s thunderous display of appreciation, the band returned for an epic encore of their two biggest hits Break Even and For the First Time.  As they were exiting the stage, Sheehan stopped at his microphone to start an acapella chant with the audience “Oh these times are hard there making us crazy don’t give up on me baby.” Such a cool way to end the memorable performance.

The opening performance by Tristan Prettyman was well received and should not be overlooked. The San Diego native is known for writing songs of a very personal nature and fit the bill nicely.