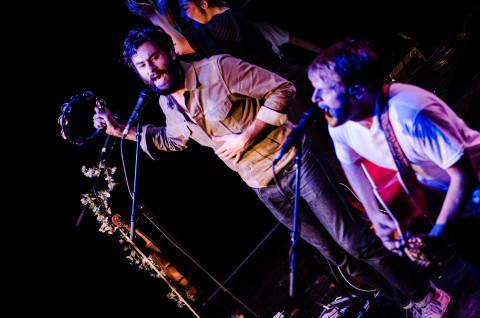 The prospect of going to a sold-out show at First Avenue doesn’t normally appeal to me; all that means is a violation of personal space for three hours. But it was two good friends (who now live in the suburbs instead of the apartment building next to mine) violating my personal space and The Head and the Heart and Blitzen Trapper filling those hours. I really had nothing to complain about.

As lame as this sounds, I’ve been meaning to listen to Blitzen Trapper for awhile, so I was glad to get the chance to see them live and get on that wagon already. First Avenue was already at capacity for their set. There was another opener before them (Bryan John Applebay), so it seemed for a second that they were the headliners. And that was probably the case for a good chunk of the people there. One of the band members said they loved Minneapolis—that it was one of the first cities to embrace them. And it seemed genuine—Minneapolis is very possessive if Blitzen Trapper as if it was their own spawn and not Portland’s.

I saw The Head and the Heart perform at the Basilica Block Party this past summer (sandwiched between The Lumineers and Train at the main stage). While I had nothing but good things to say about their performance, I remember being worried for their longevity as artists since they played songs just from their self-titled album that came out in April 2011. I thought they were going to latch onto that album—as great as it is—like Linus to his blankey. But, happily my worries were totally unfounded and they played a good portion of new music Wednesday night.

One thing that did stay exactly the same from their Basilica performance was the crowd’s reception of Charity Rose Thielen, a Minnesota native. The few lead vocals she had were met with wild applause. Even when she was just singing harmony on her flower-laced microphone and playing her violin, she still managed to grab my attention over and over. Girl crush aside, Thielen, Jonathan Russell and Josiah Johnson’s voices blend together flawlessly, and also each have a distinctive sound of their own.

The Head and the Heart did something that I’m sure a lot of people wished all bands did if they sold out a show: They added another one the following night. First Avenue’s calendar doesn’t indicate that the second show was sold out. But either way, The Head and the Heart catered to a demand. And in the music industry, it’s probably better to not play hard to get.

The Head and the Heart