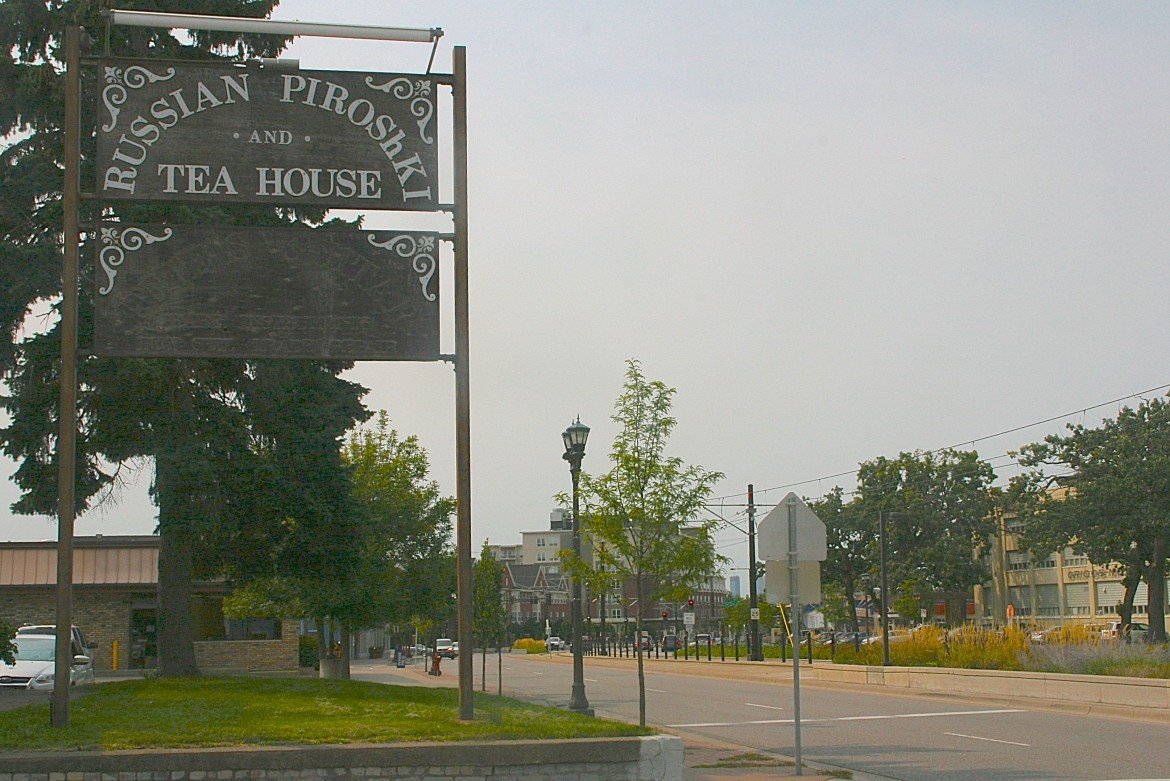 [Editor’s note: This is part of a series on businesses along the Green Line, one year after opening. We profiled the Russian Tea House and other University Avenue businesses in 2014 as part of a Minnesota Historical and Cultural Heritage Fund grant. We’re returning after the opening of the light rail to see what’s changed.]

For almost four decades, Nikolai Alenov’s iconic Russian Tea House had done well, selling ‘Russian fast food’ even back in the days when Russian cuisine seemed daring and exotic. Alenov and his wife, Linda, served their lunch-only crowd their specialty beet borscht, cabbage and meat rolls, piroshky (buns filled with beef, rice, cheese and caramelized onion,) and beef stroganoff over vareniki (potato filled ravioli-like dumplings), attracting a fan base–people who were willing to drive from around the Twin Cities to their location on St. Paul’s University Avenue.

Now, business is not so good. Once open five days a week, last spring the restaurant cut their hours. Alenov blames the Green Line.

“The first day they started ripping things out, a quarter of my customers went away. For the three years, I shut down for the whole summer,” he said. “All during construction, business was really bad. Now that the Green Line is open, there are no left hand turns, no parking in the street. The regular busses still stop, and if you’re behind the busses, you stop every block. We’re next to Wendy’s and their business is down 25 percent.”

“We’re opened only on Fridays now because during the week, no one comes. We’re two and a half blocks from a station. No one comes off the light rail to come here. No one will want to walk from there in the winter.”

But, Alenov says, Fridays are busy. “Our customers are very good customers. They make an effort to come here. I make up for the rest of the week when we’re closed by having very busy Fridays. It’s just me and my wife, and I am busy cooking and running back and forth. People say we’re now semi-retired.

“But, I’m here preparing, hauling and cleaning just for Fridays. I can see how things are slowing down, but I’m as busy as ever. I have to go to the restaurant supply, get the groceries. We still have to prepare the frozen piroshkies.”

The couple started their family restaurant in 1978 when times were tough and Nikolai, a graduate of the College of Art and Design, couldn’t find a job. Inspired by the piroshky made by the church basement ladies at St. Panteleimon’s Russian Orthodox Church, on the border of Minneapolis and St. Paul, they started selling their own, as take-out only. As the business grew, they expanded, converting their house into a restaurant, next to Nikolai’s brother’s famed guitar shop, Pete’s guitars.

The restaurant became famous. Famous rock musicians like Bob Dylan and Bono dropped by for lunch after checking out the guitars. Food Network’s Alton Brown said the restaurant was a favorite. A Russian magazine, “America” came and interviewed the brothers, an example, Alenov says with a chuckle, “of how well the Russian capitalists did.”

Pete died in a car accident in 1998 and the Alenovs closed the Tea House for a couple of years focusing on the guitar business. But, he said, people kept stopping in and calling up, encouraging them to reopen. They did, in 2001.

Despite the changes in his business, Alenov says that he’s glad that the light rail is up and running. “It’s changing University Avenue. Across the street, they’re putting in one of the biggest YMCAs in the country. Some businesses are doing well. But, mostly the light rail is about people going from downtown to downtown.”

Alenov said he plans to keep the restaurant open into the near future, keeping his customer’s favorites on the menu. The city is demanding an upgrade to the restaurant. “I don’t want to spend the money,” he said. He’s thinking of renting the building, but he said he’d miss the Tea Room and his regulars. “Our customers are like family. If I were 30 years younger, I’d build up the Tea House,” he said. “And, I’d sell vodka.”