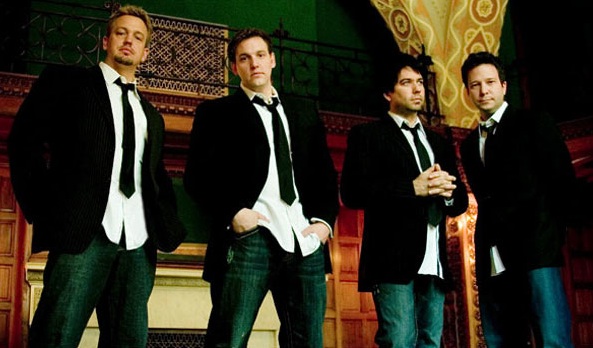 Even though I probably have the most extensive collection of Christmas music of anyone you know, I have never been to a holiday concert before. On Friday night I attended The Blenders‘ Holiday Tour at the Pantages Theatre. I hope this will be the beginning of a new holiday tradition for me.

The Blenders are four guys who started 21 years ago in Fargo, ND. They are now based out of Minneapolis but have toured nationally and appeared on TV several times. Although The Blenders are known for being an a cappella group, they have added musical accompaniment in the past few years to their shows and recordings.

From the moment the curtains opened I felt that every Christmas CD I have ever listened to came to life right before me. It was magical. The addition of full musical accompaniment allowed the quartet to ramp up the energy a thousand times and rock out to well-known holiday songs. They switched to a cappella for the telling of the Christmas story through narrative and song which I thought really allowed us to hear the vocal harmony that is the trademark of The Blenders.

The first half was a very traditional holiday show. After a break, the quartet had transformed themselves and came out as the Folkers–a wholesome, nerdy group who I assume are supposed to be from Fargo, acknowledging the roots of the group. The audience was obviously filled with family, friends and many repeat attendees who knew and loved these alter egos. Returning as themselves, the Blenders then moved into some non-holiday favorites including McDonald’s Girl. This was the song that brought The Blenders international acclaim and is now featured in a national McDonald’s restaurant commercial. There were some technical difficulties with the screen that dropped down (getting hung up in the rafters on the first try) and the video play. They thanked the audience for being patient, explaining that this was the opening night of a tour that will take them to several cities throughout the Midwest in the next few weeks.

I welcomed the return to holiday fare and loved the first encore: an a cappella version of “Silent Night.” This song and many of the other traditional Christmas music lends itself to an a cappella performance. The Blenders’ renditions really brought out the peacefulness and the message of these songs. They then came out with their band to close the show with full blast energy that had never diminished throughout the show.