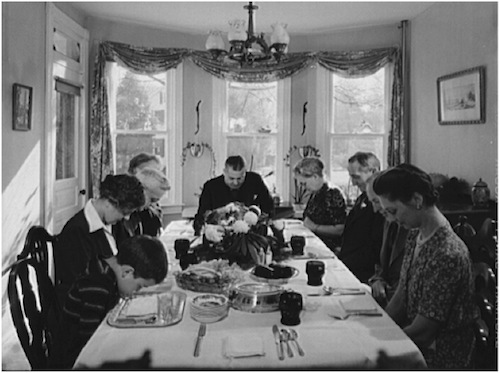 Has the Thanksgiving turkey ever gotten away from you? Ever mixed up an essential ingredient for a dish? Tangled with pets or relatives? If you’ve ever had a Thanksgiving dinner disaster you are not alone. We asked our readers to share their Thanksgiving disaster stories.

Cristeta Boarini: When I was about 10, my Grandma was finishing up making Thanksgiving dinner for a large family gathering (16 aunts and uncles, 20+ grandkids). All she had left to do was make the gravy. She had the turkey drippings in a pan and she asked my Grandpa to hand her the green Tupperware she keeps the flour in.

This is because my Grandma accidentally put about two cups of powdered sugar in the gravy, rather than flour, because someone had switched the containers she keeps her baking goods in. Grandma never made Thanksgiving dinner again after that day.

Craig Martin Stellmacher: My mom brought the turkey out of the kitchen to the dining room table and promptly dropped it on the floor one year. Without losing a beat she said:

Karen Hanson Collins: So, when I was in college, I was dating this guy from Russia. We had been together for over a year and for some reason, we decided Thanksgiving would be the perfect occasion for us to introduce our parents to each other. It was decided that his parents would host. His parents did not speak English very well and they were Jewish. My parents were very down-home type folks who were born-again Christians.

The event started out with my dad reaching out to pet their cat, who swiftly bit him hard and drew quite a bit of blood. Embarrassed, my boyfriend’s dad grabbed a first aid kit & tried to apologize in Russian & my dad had no idea what he was saying. Super awkward.

We sat down to dinner. My parents had brought my aunt, who was widowed without children (she joined us for every holiday), and she had been showing signs of dementia in recent months. She asked who was doing the Thanksgiving prayer and we all clammed up; knowing each family came from very different religious backgrounds. My aunt of course forgot about this and she suddenly broke out into a prayer about how thankful we are that Jesus died on the cross to save our sins. I wanted to just crawl under the dinner table.

Lastly, the long-awaited meal was passed around the table. Turns out the typical Thanksgiving meal is not exactly the same in Russia as it is in the States and my parents’ anticipation of roasted turkey with stuffing and sweet potatoes was quickly and obviously deflated as they quietly pushed their food around on their plates as we all sat in silence. That dinner couldn’t have ended faster.

Websites offering advice for avoiding holiday stress abound. One such site, Psych Central, offers a special report entitled Coping with Thanksgiving, including links to 30 articles on a variety of topics from coping with difficult family members, to grieving a recent death in the family, to avoiding overeating.

Of course we hope you will have a happy Thanksgiving, and that any mishaps will later become amusing holiday memories.