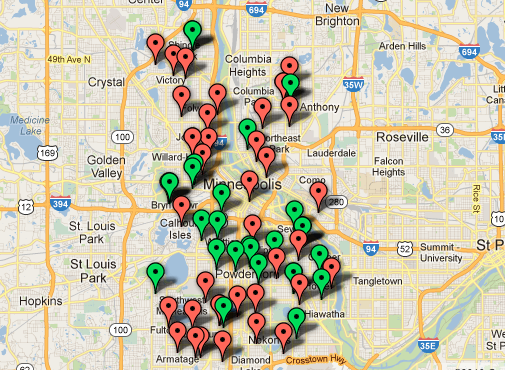 Scroll down for interactive map.

Minneapolis Public Schools is working on a new budget for 2013-2014, with substantial cuts. The budget figures are taken from the 2013-14 proposed budget allocations published by MPS, and from the 2012-2013 School and Department Allocation Spreadsheet.

Some schools are getting cuts — others are getting increases. Want to know how your school stacks up in the first budget round of 2013-2014? Click on the dot that represents your school on the map below.

SOUTHWEST HIGH – ERROR IN MAP: There’s one error in the map – created via Google Fusion – and we can’t get it to change. Thanks to an alert reader for pointing out that the map places Southwest High in the Northwest corner of the city. Here’s the accurate Southwest information:

Click here to see all school records in text format.