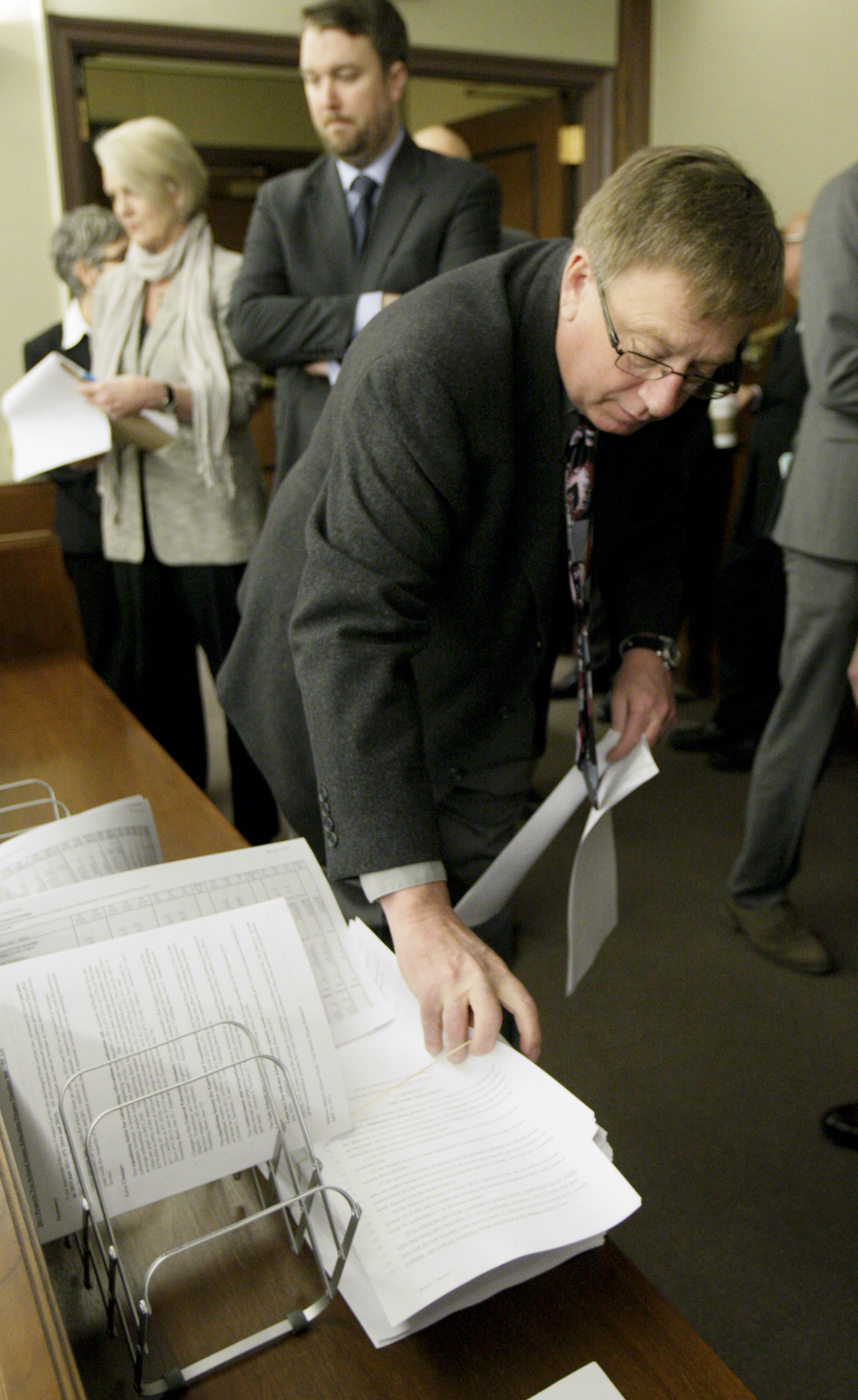 Those curious about what’s in the omnibus tax bill need only corner the lobbyists in the committee hearing room. From changes to local government aid; the proposed taxes on cigarettes and alcohol; to tax changes that affect the mining industry, these advocates are fixtures in the hearings to ensure the interests they represent are considered.

Monday, after approving a delete-all amendment to HF677, effectively turning it into the omnibus tax bill, the House Taxes Committee began taking testimony on the bill Tuesday. The committee is expected to continue testimony and take amendments tomorrow and Thursday before voting on the bill, which is scheduled to be before the House Ways and Means Committee Friday.

The funding gap left open by the less than lackluster reception for electronic pull tabs brought Allen Lund, executive director of Allied Charities of Minnesota, to the meeting. Revenue from the games is targeted to help pay the state’s portion of the new stadium to house the Minnesota Vikings. Lund was present hoping for no provisions that would undermine the future of the fledgling e-pull tabs. “We’re hoping we don’t see long-term fixes for what we see as a short-term problem in the anticipated cap in the stadium funding,” and that it is non-detrimental to community-based charities, he said during an interview before Tuesday’s meeting.

It appears his concerns are unwarranted. But the shortfall would be addressed with a new 10 percent gross receipts tax at the wholesale level on sports memorabilia, which would apply only to items sold under a license agreement with a professional sports team. The measure comes from HF1743, sponsored by Rep. Ann Lenczewski (DFL-Bloomington), the committee chair and sponsor of the omnibus tax bill. The money generated from the provision, while going to the General Fund, would be used to pay for the bonds expected to be let on the stadium in August. Her proposal to charge a new sales tax on stadium suites, box seats and seat licenses is also included in the bill.

Testifiers come to the table

For nearly five hours, testifiers came to address the bill: Small-business owners in favor of provisions; representatives of large businesses sounding dire warnings about the proposed new taxes; people favoring the new $1.60 taxes on cigarettes and those who said the new taxes will drive business across state lines and only create a black market for tobacco products.

Overall, the bill would raise about $2.6 billion in new revenues over the next biennium. The DFL marquee tax provision would be creation of a new fourth-tier income tax bracket. Individuals with taxable income greater than $400,000 per year for joint filers would see a tax rate of 8.49 percent. The new fourth-tier taxpayer would also see a 4 percent surcharge for each year in the next biennium to allow for repayment of the school shift. During the two-year time period, Minnesota’s 12.49 percent top rate would give it the distinction of having the third-highest income tax rate in the nation.

More property owners and renters would benefit from the qualifying threshold changes in the homestead credit refund and renter property tax refund. Tax savings could be realized as well through conformity measures with the federal tax code, most notably the increase in the standard deduction for married joint filers from $10,150 to $12,200 in tax year 2013; increased contribution limit for education savings accounts; and increased income limits and unlimited time period for deduction of student loan interest.

Todd Mikkelson, who owns a small business, and spoke as a member of Small Business Minnesota, said that far too often public policy favors large corporations. “This bill would address some concern of small-business,” he said citing the upfront sales tax exemption on capital equipment purchases and the sales tax on Internet sellers in the state who directly or indirectly refer potential customers to Internet sellers.

However Beth Kadoun, director of tax and fiscal policy for the Minnesota Chamber of Commerce, expressed strong opposition to the proposed tax increase that will fall on the business community. The group objects to the new income tax fourth tier, saying that will directly affect many business owners’ income and make it harder for the state to attract entrepreneurial talent and will hamper investment.

The bill would also provide some help for veterans. It would expand the eligibility for the tax credit for past military service to individuals who receive a pension or retirement pay for service in the military. Additionally, a qualified employer would be able to claim a credit for each disabled or unemployed veteran hired, under certain conditions.

While not as much as initially proposed, the Mayo Clinic’s Destination Medical Center proposal would see some public assistance with their effort to help improve the city of Rochester’s infrastructure.

The bill would direct the city to create a nonprofit corporation to help develop the plan and to finance the development. The maximum amount of general state aid would be $338 million, with no more than $30 million per year. In addition, $119 million of funding for public transit for the project would be funded with local taxes.

Other cities would receive economic help through extension of sales taxes, imposition of lodging taxes or changes to tax-increment financing districts. These projects include the proposed expansion to the Mall of America in Bloomington and a new building for 3M in Maplewood.

The Iron Range has its own unique set of taxes set around the mining industry and could see significant tax increases through the bill. According to Craig Pagel, president of the Iron Mining Association, the bill would double the occupation tax and there is a production tax increase proposed as well.

“We’ve been working to educate the legislators on the economic impact of these proposals,” he said. The bill would increase the rate of the taconite production tax by 5 cents per ton and increase the match requirement for companies receiving distribution from the taconite economic development fund from 50 percent to an equal match.

This portion of the bill would also impose a new 55-cent per cubic yard tax on silica sand mining and a 3 percent tax on processing the sand.