A few years ago I heard a report that the owners of Chinese buffets were getting out of the saturated buffet business, and getting into the sushi business, which offered less competition and better profit margins. (Surprised about the profit margins? “Sushi-grade fish” may be expensive, but the actual amount of raw fish in a $4.50 two-piece order is a fraction of an ounce.) The result was the rapid proliferation of sushi bars, and exotic varieties of sushi never heard of in Japan – typically made with avocado, cream cheese, and lots of other ingredients, but not a lot of fish. 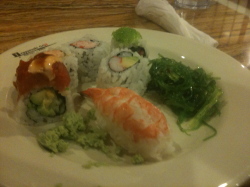 Now comes the next stage in the evolution of the business model – buffets that combine the traditional spread of General Tso’s chicken, beef with broccoli, fried rice, etc. with sushi, teppanyaki grills and even some of the most popular items from the Old Country Buffet repertoire.

The Teppanyaki Buffet at 2216 E. Lake Street in the Hi-Lake shopping center, which bills itself as the area’s biggest, is also the newest of these, joining the Hibachi Buffet at 111 E.Lake St., University Buffet, 225 University Ave. W.,St. Paul, and the 98 Pound Buffet in Bloomington.

The teppanyaki part of the formula, (which was actually developed by Benihana founder Rocky Aoki in the USA and later exported to Japan) loses something in translation. At Benihana and its imitators, you sit around a table and watch a chef perform, but – at the buffets, you pile your plate up with vegies, noodles and  thinly sliced meats or shrimp, and then hand the plate over to a cook, which quickly stir-fries it all together with a little sauce and then hands it back to you. 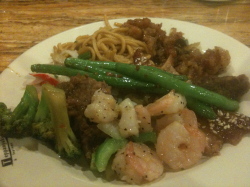 More impressive is the sushi – which is served up in lots of varieties, ranging from spicy tuna to shrimp to California rolls. This isn’t great sushi, by any means, but let’s face it, neither is the sushi served at most a la carte sushi restaurants. Also impressive, or at least surprising, is the range of non-Asian foods on the buffet – fried chicken, prime rib (not exactly prime, but that’s what they call it), macaroni and cheese, creamed spinach, twice-baked potatoes, pepperoni pizza, kielbasa (or a close cousin), poached salmon, pigs in a blanket, a build-your-own sundae station, etc., etc.

Teppanyaki Buffet is also a bargain compared to the other sushi-teppanyaki-Chinese buffets around the Twin Cities: $6.99 for lunch, $8.99 for dinner, and all day Sunday.