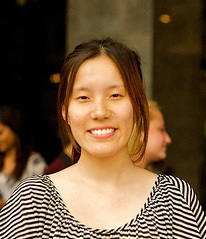 In a coffee shop full of University of Minnesota students behind glowing screens in the peak of finals weekend study hours, there is nothing outwardly remarkable about Tenzin Pelkyi. Her quiet demeanor and small stature are in stark contrast to this college senior’s accomplishments, life story and dedication to advocating for human rights of the Tibetan people and of the diaspora.

As a former Tibetan refugee born in New Delhi, India who can still envision India’s yogis, monkeys and beautiful natural environment, she considers herself much like her native Minnesotan U of M classmates.

“The great thing about this state is that there are a number different refugee populations here,” Pelkyi said. “With this exposure, many Minnesotans take civic engagement seriously, are aware of the larger world, and are able to think more broadly about society, racism, and education.”

Pelkyi’s mother and father escaped Tibet in the 1959 Tibetan Uprising and lived in exile in India till the 1990s. In 1992, Pelkyi’s father obtained one of only 1,000 visas given to Tibetans to resettle in the United States.

Minnesota has the second-largest Tibetan refugee population in the United States. Some may wonder why refugees from India, Tibet, or anywhere would come to such a cold and landlocked state as Minnesota. The Twin Cities became the largest of the settlement sites as volunteers successfully organized host families and jobs for the immigrants.

Because of restrictions of the U.S. Tibetan Resettlement Project, Pelkyi and the rest of her family were not able to join her father in the United States until four years later.

She was shocked with the first Minnesota snowfall, the standard of living, new gadgets, and Mall of America, but knew she wanted to stay.

“I came here at a young age,” she said, “but the community here was so open to us and I just felt I belonged here.”

She still feels fortunate to be in the United States. “Everyone in India dreamed of going to the U.S. to give their children an education and opportunities,” Pelkyi continued, “There, social mobility doesn’t exist, but here, poor people from other countries can make it.”

Motivated by her mother and father, who worked for the Central Tibetan Administration in exile and continue to work for a free Tibet and the advancement of Tibetans of the diaspora, Pelkyi also dedicates most of her time to the cause. Pelkyi spends her time raising awareness about human rights in Tibet on campus, through the city, at the state, and even national levels.

Even though it may not be clear how collecting signatures on petitions and organizing documentary film screenings, and community-wide prayer sessions can help Tibetans and Tibetan refugees, Pelkyi has witnessed her work pay off in public policy changes.

Through her organizing efforts, she was able to attend Tibet Lobby Day in Washington D.C. last year with a strong turnout and presence of young people.  There, she and other supporters urged Senate members to pass  S. Res 356, which called  for immediate diplomatic action for the Chinese government to end repressive policies targeting Tibetans, address their grievances, and allow unrestricted access to foreign journalists and diplomats to Tibet.

Pelkyi also sees the great importance of focusing on the younger generations as she fosters peaceful dialogues between Tibetan and Chinese students and spends her Friday nights mentoring Tibetan youth.

“Young people will eventually be our leaders,” Pelkyi said. “They will be the ones making the decisions that will determine which direction our world will go.”

Pelkyi has been accepted to the University of Minnesota’s Law School and hopes to focus on international law to continue her work for underserved communities.

“When a young Tibetan here accomplishes something,” she said, “it brings hope to all the Tibetans of the diaspora.”

CORRECTION: Original headline incorrectly read “refugee camp.” Tenzin Pelkyi’s family were refugees, but did not live in a refugee camp.