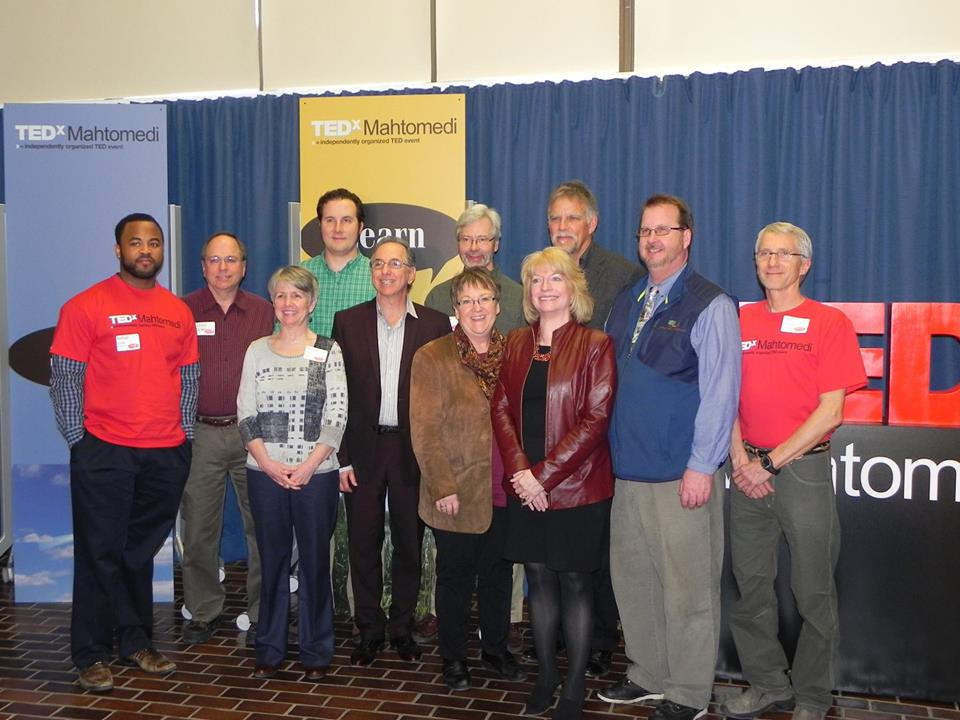 From the return of 14th century communal bread ovens (good for pizza, too) to thoughtful tooth-brushing and 3D printers, TEDxMahtomedi asked “What’s next?”  Would you pay for the privilege of thinking along with a dozen creative minds? A sold-out audience did just that on March 22. The talks will eventually be posted on the  TEDxMahtomedi website, where anyone can watch without charge.

There was a wide range of topics covered but each seemed to get back to the idea of What’s Next?, which offered a chance for each speaker to offer suggestions on how attendees might implement these good ideas. I’ve been to several TED and TEDx events in the past,  they don’t all have that spin of implementation. I thought it was a nice touch by the planners.

Here’s a brief synopsis of the various talks; they will be posted on the TEDxMahtomedi website once processed.

Glenda Eoyang: Unstuck! – Eoyang introduced the idea getting unstuck through adaptive action, which asks three questions: What? So what? And what next? These questions help you see and understand patterns, which leads to action. Her talk and process really set the format for the day – encouraging thoughtful change.

Jim Lane: Modeling the Microcosm: Inspiring Student Scientists in 3D – Lane talked about how he uses models (like blocks) in the science class to get students make work on microcosms more tangible and accessible. Models encourage kids to think at a structural level. Add in some technology, such as a 3D printer, and kids are learning to use today’s tools to meet today’s challenges.

Bryce Johnson: Shaping Faith and Community One Loaf at a Time – Pastor Johnson spent a sabbatical learning all about bread and bread making. From the 14th-19th centuries, European towns had a communal bread ovens where neighbors would bake bread and build community. He takes that ideal into his church with a bread oven that is used for classes and communal cooking. He has learned that in the modern age, pizza encourages community at least as well as bread.

Rashad Turner: From the Hood to the Woods – Turner shared the story of his own difficult childhood and the impact camping had on his leadership skills, team building ability and confidence. It’s an experience that Turner replicates with students today – taking city kids camping to help build the same skills. Campers do a 9 miles hike as part of the process, an experience they say teaches them to face challenges to accomplish their dreams.

Paul Steinhauser: Race to Reduce Water Use – Mahtomedi, adjacent to White Bear Lake, has been watching the water in the lake ebb in the last few years. It’s a community that should be water-aware. Steinhauser helped focus awareness on water waste and offered suggestions to reduce water use – such as environmental toilets and being more sensitive to water going down the drain, literally, as you shave and brush your teeth.

Craig Campbell: Creativity: Who’s Got It? Who Needs It? What Is It? – Campbell explained that creativity isn’t a talent, it’s a way of doing things. There are five steps to the process of creativity: preparation, incubation, insight, evaluation and production. It’s not a failsafe plan; it’s a plan that embraces and learns from failure.

Joel Hodroff: Drowning in Wealth; Searching for Money ­–  Hodroff introduced the idea of dual currency. Consumers earn currency through civic engagement, such as volunteering in the local community. Local vendors accept that currency for partial payment on goods and services that represent excess capacity. So I might work at the crisis nursery for a discount on visits to the YMCA in the off hours.

John Fetrow: Fixing the U.S. Health Care System: Yes, Really! – Fetrow introduced a three tier healthcare system for the US. Tier One: government pays for preventative medical visits. Tier Two: government pays half of medical procedures, individuals pay the other half up to 10 percent of annual salary. Tier Three: government pays all. Health care invoices, however, would be the same regardless of tier. It encourages patients to shop and live responsibly.

Jill Greenhalgh: Re-story-ation: Rewriting Our Stories in a Changing World – Greenhalgh talks about a process of rewriting or reframing your life-story through re-story-ation, a process that works for people, individuals and communities. It provides an opportunity to hit pause, regroup and reinvent your image and ideals.

Todd Bol – Books Around the Block and More – Bol is the co-founder of Little Free Library, an initiative that encourages people to place weatherproof boxes of books in their front yard to share with others. He spoke about the community that has developed in individual neighborhoods through the free libraries. In 2011 there were 5 Little Free Libraries in Minnesota; now there are 1300.

Margaret Stone: You Can’t Google That! – Stone represented for the modern librarians explaining that libraries aren’t about books they are about information, knowledge and giving people tools they need. Google, she explained, did not make libraries obsolete, it encouraged people to ask better questions.