Jose Torres-Tama in Aliens, Immigrants, and Other Evildoers. Photos by Meredith Westin.

“Latinos in Transition” is the theme for the 10th Annual Political Theatre Festival, presented by Teatro del Pueblo and Pangea World Theater. In its 10th year, the festival is becoming a staple in the community and Al Justiniano, artistic director of Teatro del Pueblo, hopes that the festival will continue for many more years.

The theme references the demographic shift in this country with the increase in the Latino population and how it is “relevant to the national debate of who is American,” according to Justiniano. “Funding for the festival is always a challenge. Issues covered are controversial at times, but funds still appear at the last minute.”

This topics presented in this year’s two plays fit with the festival’s history of tackling controversial topics for the purpose of generating a positive conversation on issues. The festival’s opening show, Aliens, Immigrants, and Other Evildoers, directly confronts the immigration controversy. The second play, ¡Gaytino!, provides a humorous and personal look at being gay and Chicano.

Jose Torres-Tama’s solo performance in the multimedia show Aliens takes a satirical and hard-edged look at America’s treatment of immigrants. Arizona SB 1070, the provisions of which include requiring legal alien residents to have in their possession at all times their registration papers and authorizes the detention of those who are “reasonably suspected” of being an illegal alien, epitomizes a year of high anti-immigration sentiment, much of it directed against Latinos in general. In reference to SB 1070, Torres-Tama’s play dedicates a satirical song to Arizona Governor Jan Brewer.

Torres-Tama took the show’s title from President George W. Bush’s remarks about protecting our nation from “evildoers.” In a phone interview, Torres-Tama stated that his play seeks to puts a “human face and heart” on the Latino immigrants who are “being vilified” as evildoers and criminals and yet have their labor exploited. The show uses a sci-fi theme to satirize the concept that immigrants are classified as “aliens” in this country.

The play poses the question: “Since the Pilgrims arrived without papers, why were they not immediately deported?” At a technical run-through of this one-person show, it is clear the play does not shy away from controversy: it opens with “Ave Maria” being sung in the background while Torres-Tama’s extra-terrestrial persona drags in a red cross with dollar bills nailed to it.

In this bilingual multimedia performance, Torres-Tama shifts into eight different characters telling their stories as aliens. The characters populating the play are based on filmed interviews with Latino immigrants in the cities of Houston, New Orleans, and Washington, D.C. Among the stories told are that of a Nicaraguan woman who crossed the border when she was eight years old to reunite with her father who had escaped the country’s civil war in the 1980s and a New Orleans laborer activist who almost lost his job in a reconstruction job rebuilding the city of New Orleans. One of the themes revolves around how Latino laborers who rebuilt New Orleans in the aftermath of Hurricane Katrina were exploited both by being subject to health hazardous work conditions and being cheated of their pay. 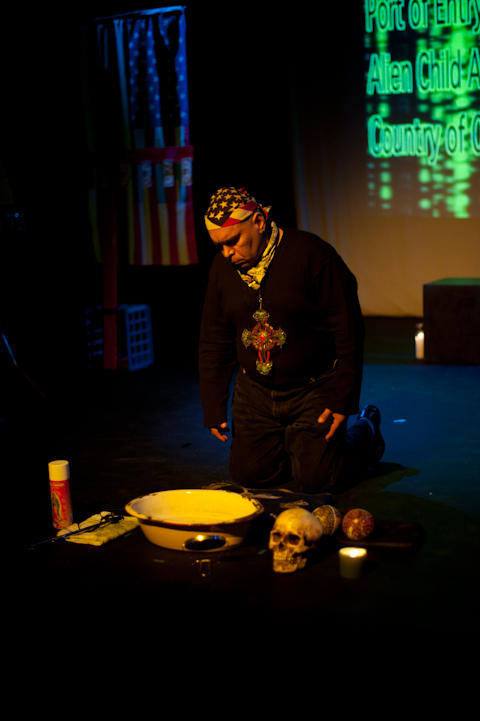 Torres-Tama, whose family emigrated from Ecuador to New York when he was a boy, is a Louisiana Theatre Fellow and an NEA award recipient. He is also a regular contributor to National Public Radio’s LATINO USA weekly news journal. Although he’s legally resided in this country for decades, the play’s relates the time Torres-Tama was traveling in Eastern Europe in 1999 and lost his “green card,” which significantly complicated his efforts to return to his home in the United States.

¡Gaytino! is Dan Guerrero’s one-man show where he uses both music and humor to relay his experiences growing up as both gay and Chicano. Guerrero grew up in East Los Angeles and made his way to New York City, where he both performed and worked as a theatrical agent with clients in the original casts of countless Broadway musicals. Upon his return to Los Angeles, he has been successfully working as a producer and director for both television and stage productions. Hispanic Magazine has recognized Guerrero as one of Hollywood’s 25 most powerful Latinos.

About six years ago, Guerrero returned to performing in his one man show ¡Gaytino! He performs the show as time permits between his producing and directing projects. The impetus for developing ¡Gaytino! came from his realization that there were more gay characters on television than Latino characters. In a phone interview, Guerrero relayed that although the show is autobiographical; his play is less about himself than about gay and Chicano history—related from a personal perspective through storytelling and music. It is a positive story about both gays and Chicanos: both groups have suffered discrimination and have made great strides in spite of it.

With humor, the play touches on such topics as when Guerrero first realized he was gay and when he first realized he was Chicano. The show has a running time of approximately 75 minutes, and consists of Guerrero, a stool, a mic, and music. Guerrero has performed this show at venues across the country, including performances at the Kennedy Center in Washington, D.C. His appearance at the festival will be his first performance in the Twin Cities area.

The festival runs from February 17-27 at St. Paul’s Gremlin Theatre; it opens with Aliens, Immigrants, and Other Evildoers and concludes with ¡Gaytino!