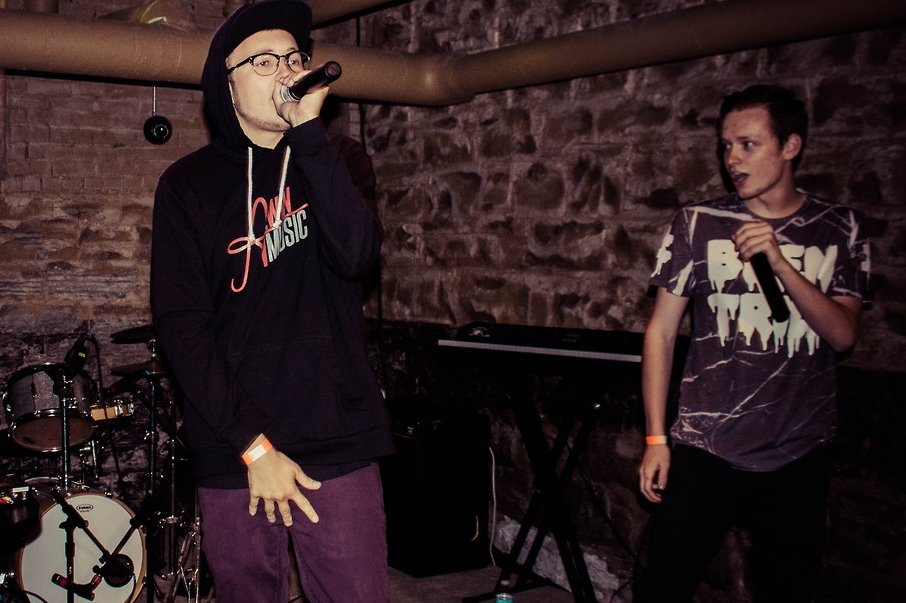 Hip-hop artist G. Rice and his music producer MOsh made their debut in Minneapolis at Mill City Nights, where they had fans raving about their performance.

On Friday, August 15, Mill City Nights held down Apollo Quad’s 5th Anniversary hip-hop show. In addition to Apollo and G. Rice, the concert featured performances from other local artist including Bloodshot, P-nut The Artist and N.E.S.D.

Team G. Rice was the second to perform at the event and got the party started at Mill City Nights. In front of fans and Trevor Anthony Photo, the two got the crowd amped and entertained with their up-tempo flow and fresh lyrics.

The neon lights, cameras flashing and crowd screaming in the faces of G. Rice and MOsh thrilled them as they performed stronger as the event went on and ended with a bang.

G. Rice elaborated and said he experienced “the best feeling of the world.”

“That was the funnest s–t I’ve ever done in my life,” G. Rice said. “That was so amazing – everybody was there just [expletive] amping and going crazy for my music. That’s like the best feeling in the world, you have no idea.”

Before the event, G. Rice said this event meat a lot to them.

“The meaning [of] why I wake up every morning is to chase this dream,” G. Rice said. “We’re just dipping our toes now; I can’t even imagine what these next few years are going to hold for us.”

It all started with a garage band microphone for G. Rice and a $400 beat-making machine system for MOsh. The two both grew up in the Twin Cities West Metro area suburb, Maple Grove, and were acquainted with each other in a third grade church class. However, it wasn’t until the ninth grade where they really became close friends.

“Ninth grade we started kicking it and then senior year of high school we started making music,” G. Rice said.

G. Rice began rapping after freestyling at a cabin with his friends. Afterwards, he wanted to go deeper with making music and asked MOsh if he’d join.

“He just came up to me and said ‘dude, Imma start rapping now.’ He’s like ‘dude you should try to make a beat,’ and I’m like, ‘alright dude,’” MOsh said.

From there, MOsh brought an expensive beat-making machine and attempted to make beats. He said at first it was frustrating; but once he got the hang of it, he enjoyed producing original beats.

“I didn’t really get serious until a year and-a-half ago and now I’m going to school for it,” G. Rice said.

After producing an unofficial mixtape titled, “Musical Medicine,” G. Rice was later signed to A. Win Music. A. Win Music is a musician management firm. The company helps their artists with production, development in the studio and promotion, through photo shoots and merchandising.

G. Rice thanks A. Win Music’s Executive Assistant Antony Skrundevskiy for introducing him to Founder of A. Win Music Annie Nguyen, who also deals with artist management and development.

“[We’re] looking at artist locally who have the talent and drive to make it into the music industry,” Nguyen said.

Nguyen said she liked G. Rice because the music he created was unlike anything else she’s heard.

“His rap music and voice is something I never heard before – especially that he’s white,” Nguyen said. “He’s really original … musical medicine is what he calls [his music]. It’s like hip-hop and he’s talking about [different] things.”

In the documentary, “Dosin’ Twin Cities with Musical Medicine,” G. Rice explains his music flows as something really trappy and drug experimental. MOsh explained he likes making music others haven’t heard before because its new and is different from mainstream music that gets recycled.

G. Rice’s efforts to make original music paid off when he was drafted by A. Win Music. He said being acquired by the firm, along with fellow rapper Skinny, made him realize how far he came.

Nguyen said G. Rice is “a work in progress” and that she’s constantly pushing G. Rice. However, she said G. Rice is up for the challenge and “he’s discovering a different side of himself, musically.”

Going forward the two will continue to make music with one focus in mind.

“I just want to make good music,” MOsh said. “I want people to listen to our music and think it’s as good as we think it is.”

After their performance at Mill City Nights, it appeared they’ve reach that goal with those in attendance. However, their journey won’t stop there as they’re determined to take their music talents further. As G. Rice said, “we’re just dipping our toes now. I can’t imagine what these next few years is going to hold for us.”