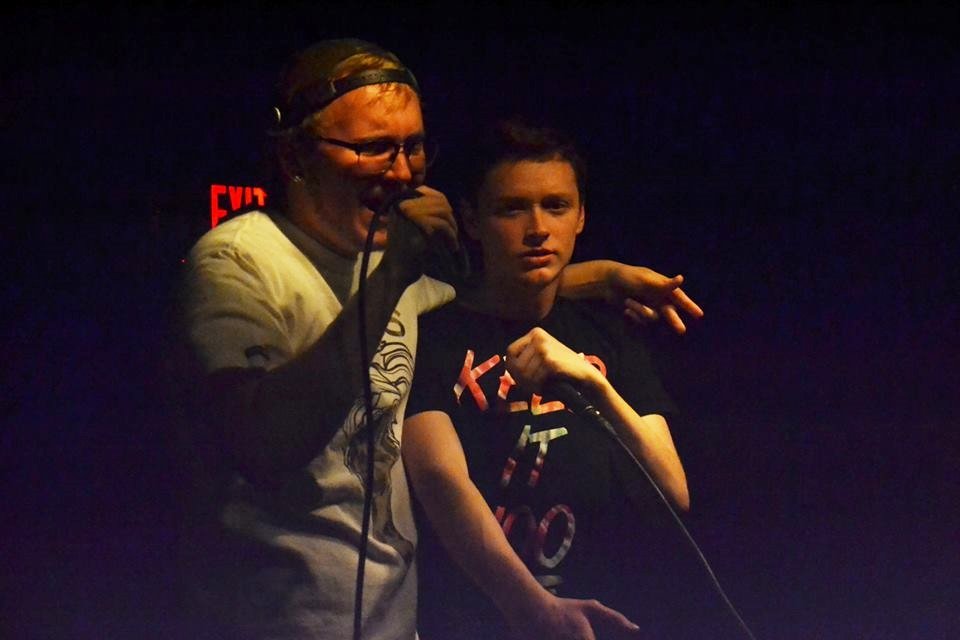 Hip-hop artist G. Rice (left) and music producer MOsh (right) performing together live at Honey on Nov. 24 for their second show together, their first since August 15, 2014, at Mill City Nights.

“It was dope, it felt good to release some new music out [sic] for all these people out here and it’ll give them something to follow-up on my SoundCloud GRiceProductionsMN,” G. Rice said.

On Nov. 24, SOFTPORECORN hosted “Optimystic’s Hennepin and Hyperspace Release Show.” The event featured live performances from the following artists: Optimistic and his brief collaboration with Lifted Mindz, Exxe, North star Wisdom, Aftermind (Counter Culture) and G. Rice as he capped off the night with the final performance, which was past midnight. If G. Rice’s track was any indication, he came ready to give the audience a show.

“Twelve o’clock I’m ready, my lyrics are far from petty, we blowing shit like confetti,” G. Rice rapped while performing the lyrics to one of his tracks.

In a night with hip-hop performances and a hippie tinged performance by Optimystic, G. Rice brought an element that wasn’t heard that night as he performed his trap-styled music.

“My style of music is like trap music, mixed with drug experimental,” G. Rice said in the documentary “Dosin’ Twin Cities with Musical Medicine.”

He opened with the release of his new track “Hoe,” which G. Rice said is “a banger.”

Afterwards, G. Rice went on to perform a few of his other bangers including Mayday, SlowSip and his cover to 0-100 to present what he calls “Minnesota Music.”

“I’m G. Rice and this is MOshbeatz and we from Maple Grove, Minnesota…we out here just trying to make some Minnesota music,” G. Rice told the crowd during a break after their opening tracks.

Although the two, G. Rice and MOsh, faced some technical difficulties during their live performance, MOsh said he looks for them to have more performances at Honey.

“My mic wasn’t working, but whatever,” MOsh said. “It was still fun, we have more shows to come…I want to do more shows here. There was a lot of people here so it would be sick.”

MOsh said they’ll look to perform at the venue Honey in February of 2015.

“It can only go farther from here, we’re going to have more people,” G. Rice said. “It’s going to be crazy, I feel like, in the next two years. Us doing this and trying to chase this dream. This passion and this dream we’re chasing, it’s out here bro.”