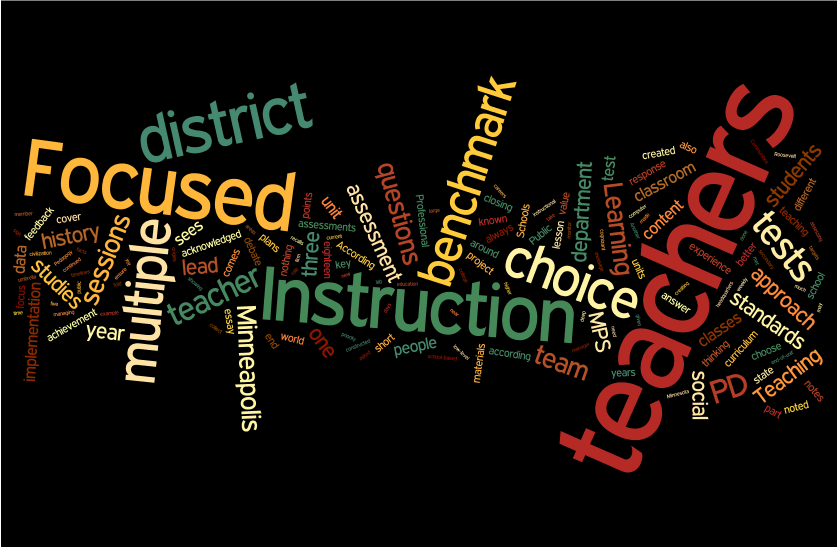 If the full implementation of “Focused Instruction” is a priority for the Minneapolis Public Schools (MPS), according to Superintendent Bernadeia Johnson, what does this mean for a Minneapolis public school teacher?

Roosevelt High School teacher Jill Jacobson, who has been a social studies teacher in Minneapolis for eighteen years, was a member of the three person team who wrote lesson plans and tests for the district’s secondary world history teachers.

For Jacobson, agreeing to be part of the team creating Focused Instruction materials was an attempt to have greater control over what shape the materials would take. Prior to Focused Instruction, Jacobson says that history teachers have “always followed Minnesota state standards,” but teachers have “always known that you can’t teach them all” in one year. State standards were seen by teachers more as an “umbrella,” with benchmark points being used by teachers as different ways to ensure the standards were being met. Being able to choose different areas or benchmarks to focus on meant teachers could “build classes around a focus, and a teacher’s strengths.”

With Focused Instruction, however, Jacobson says all of the benchmark points for the state standards are now required. For her, this taps into a debate about how history classes should be taught: Is it better to “dip in and do a survey course,” which is the approach Jacobson sees with Focused Instruction, or is it better, in the age of information, for a teacher to encourage more “depth and critical thinking” by concentrating on key aspects of a topic?

According to MPS, Focused Instruction is a standards-based approach to teaching, and one of the district’s “key strategies for raising the achievement of all students, closing the achievement gap and preparing students for college and careers.” A hallmark of Focused Instruction is the way it provides lesson plans, learning targets (what students should know by the end of a unit), curriculum units, and end-of-unit benchmark tests to classroom teachers.

Read more articles at Focus on Teaching — and tell us about your experience, with an email to editor@tcdailyplanet.net.

This debate has been continued, for Jacobson, with the district’s approach to benchmark assessments for high school social studies classes. As part of the team of teachers who created the benchmark tests, to be given at or near the end of each unit of study, Jacobson recalls the department of Teaching and Learning’s “content lead” for social studies telling the team to create a benchmark test that included three to five multiple choice questions and one “constructed response,” such as a short written answer to a question. This type of assessment is to be done in a computer lab, in a thirty minute time frame, for a unit that, for example, may cover the start of human civilization and the origins of all of the world’s major religions. Jacobson says she and the two other teachers on the team told the content lead “no,” because “history teachers do not do multiple choice tests,” which Jacobson says amount to nothing more than trivia questions.

Mike Lynch is the current director of Teaching and Learning for the Minneapolis Public Schools, and is responsible for overseeing the implementation of Focused Instruction across the district. Lynch comes to his MPS position, which he has held for the past eighteen months, from three years of teaching, through Teach for America and a Fulbright scholarship, and a career as a project manager for the global consulting firm, McKinsey & Company. It is this experience, Lynch believes, that positions him well to lead the implementation of Focused Instruction in Minneapolis, as he sees his role as that of “managing project timelines on budget,” more so than that of an instructional leader or expert in curriculum development. For Jacobson, Lynch’s lack of experience in education is problematic when it comes to what teachers are being asked to do with Focused Instruction.

While Jacobson considers multiple choice tests a “low-level form of assessment” that are useful mostly for assessing facts, Lynch feels there is a “misconception about the value of multiple choice questions.” In an interview, he noted that multiple choice tests can “assess higher level thinking,” according to people the district has consulted, although he acknowledged that MPS is emphasizing multiple choice tests with Focused Instruction because “that’s easiest to collect” for data purposes. Lynch also noted that teachers are being encouraged to bring other examples of student work to their weekly school-based “Professional Learning Communities” (PLCs), where teachers are to gather and compare data, with the goal of further closing gaps and “informing instruction.”

Another point of contention Jacobson sees is with the district’s new, Focused Instruction-based Professional Development (PD) sessions for teachers. Before Focused Instruction, Jacobson found the district’s PD sessions for social studies teachers to be “rich and deep,” and organized around how to use an approach called “Authentic Pedagogy” in the classroom. Now, Jacobson says PD sessions have become nothing more than the district “showing people how to access the Focused Instruction units and then asking the teachers what is working and what isn’t (and then expecting the teachers to fix it).” What Jacobson misses most with all of this, she says, are the “opportunities to reflect deeply with colleagues.”

Lynch has said that his department is very cognizant of teacher feedback, both positive and negative, regarding the PD sessions, and that he will monitor this feedback “very closely.” He also acknowledged that the PD sessions, which requires teachers to be at district headquarters, rather than their classrooms, for up to three days of the year, has created a “challenge for the district,” because of the large numbers of substitute teachers needed to cover PD absences. Lynch said that this situation is “very much on people’s minds,” and, while “improvements need to be made,” he notes that this would be true with “everything we’d adopt” as a district.