The election is over. The Sunday morning gab shows suddenly found a purpose, interviewing serious Senators and other concerned about the work that the new (and first old!) Congress will face – particularly the “Fiscal Cliff”. A tremendous amount of movement on the Republican side shows that tax increases, particularly coming as reform in the deductions allowable, is definitely on the table.

Grover Norquist now knows what it’s like to be in a position where you can’t deliver the votes. Must be a shocker.

The question remains, however, as to how much of the roughly $1.1 Trillion deficit will be tackled in year 2013, and how much will be spun out into the future. No one expects the gap to close overnight, but instead are looking for serious progress towards balance. More to the point, they want to assure markets that it won’t grow from here. How much can they raise get us down the path right away? Here is a short guide to some of the ways to look at it.

We have to start with taxes because this is the part that has changed the most in recent years. By any measure, both individual income taxes and corporate taxes are at the low end of where they have been since the end of WWII. Here is a graph of both as a share of the economy, plotted with time: 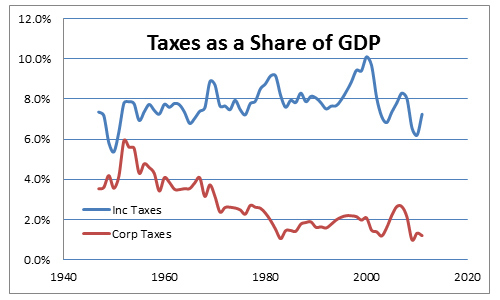 The most striking figure here is that corporate taxes have fallen dramatically with time. Where they have been as high as 6% of GDP in 1950, they have fallen to a mere 1.2% today. Simply bringing them up to the average over the last 65 years of 2.7% of GDP would raise the revenue by $229 Billion, a significant amount. Let’s put that number on the table as a reasonable, even modest place to start.

Receipts from income taxes are also at the low end, as a share of the economy, if not as dramatically. They are currently at 7.2% of the economy, below the average over the same time of 7.8%. Simply bringing individual income tax up to the 65 year average would add $80 Billion to Federal coffers. It’s worth noting that household income is about $14 Trillion of the $15.7 Trillion GDP, meaning the net effective rate overall is still only around 7.8%. It’s hard to complain that it’s high by any standard.

Simply bringing these taxes up to their postwar averages raises over $300 Billion a year. It’s a good start, but where else could we find revenue?

One tax that has been talked about off and on is a tax on the value of stock trades. There are many reasons for doing this, and not all are about tapping into the estimate $33 Trillion in trades that are executed annually in the US. One of the features of our stock market is the rise of “High Frequency Trading”, the automated plays by a mechanical algorithm for tiny little advantages. That has been estimated at as much as 65% of the trade volume today, although as a share of the money traded it is much smaller. A tax on all trading, even a tiny one, would assure that no trade would take place with an advantage below the value of the tax.

Such a tax has been proposed at a measly 0.03% – and is estimated to raise as much as $35 Billion a year. That is probably high as it would certainly reduce the volume of trades substantially. Nevertheless, a much larger 0.2% tax on all trades would raise upwards of $200 Billion per year and should be considered.

Taken together, some key taxes on the table raised to very moderate amounts could easily raise upwards of $500 Billion or nearly half of the deficit we have today. It seems like a reasonable compromise, especially if reductions in spending are considered across the board and the roughly $700 Billion in military spending is also on the table. A balanced budget is very real and practical, especially if we ease our way into it and consider additional spending of $100 to $200 Billion in the short term on infrastructure to encourage growing our way into the size of the budget we have.

Will all this happen? The short answer is yes, something like this will probably be what comes out of the negotiations. Consider this a prediction, to be evaluated at the end of whatever long and torturous process we are about to undergo. Consider the process itself a test of Congress, particularly the Democrats, as to how real they take the problems raised by excessive debt.