A $432 million tax bill that would conform the state’s tax code to several federal provisions and repeal three business-to-business taxes was re-passed overwhelmingly off the House floor 126-2 on Friday. Earlier in the day the Senate passed the bill 58-5. It now moves to Gov. Mark Dayton for action. He said during a press briefing today that he would sign the measure as soon as it reaches his desk.

“This is really a compromise among the three bodies on what we can get done here today,” said Rep. Ann Lenczewski (DFL-Bloomington), who sponsors HF1777 with Sen. Rod Skoe (DFL-Clearbrook). “We all don’t agree on everything, but all four caucuses and the governor have found a way to come together for middle-class tax relief.”

Republicans called the bill, and its repeal of business taxes, an acknowledgement that last year’s tax increases were a mistake.

Rep. Mike Benson (R-Rochester), calling for more tax cuts this session, likened the bill to a game with two halves. “In the first half, the home team got slaughtered with a $2.4 billion tax increase. We are starting the second half, and the home team is rallying here but has a long way to go.”

“I hope this House has learned its lesson. Never again will a business-to-business tax darken this door,” said Rep. Greg Davids (R-Preston).

The bill, as amended Thursday in the Senate Taxes Committee, would lower the amount put forward in the initial House proposal by about $71 million to approximately $432 million for the 2014-2015 biennium. The governor’s tax proposal (HF3122) comes in at $615.56 million in reductions over the biennium.

As proposed by the Senate, the savings would come largely from delaying repeal until March 31, 2014, of two business-to-business taxes enacted July 1, 2013. The House had opted to make the repeal retroactive to July 1, 2013, and allow for a refund mechanism. The warehouse sales tax was set to take effect April 1, 2014, but that, too, would be repealed.

The bill would push back the effective date for an upfront sales tax exemption for capital equipment purchases after June 30, 2015.

The bill would also extend the Angel Investment Tax Credit, which was set to sunset this calendar year. For 2014 the allocation would increase from $12 million to $15 million. The credit would be available in that amount for 2015 and 2016. 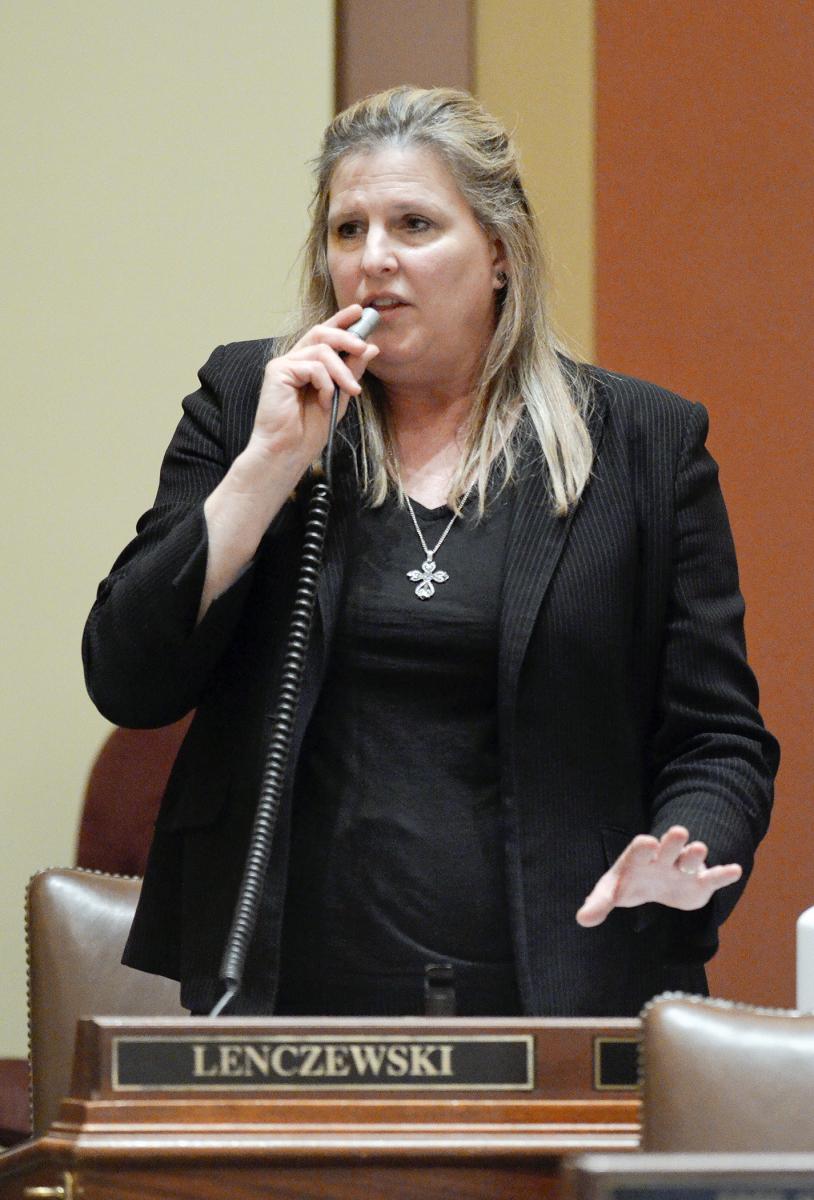 Other differences accepted by the House include:

Right: Rep. Ann Lenczewski speaks on the House floor March 21 during debate on re-passage of a tax bill. (Photo by Andrew VonBank)

Conforming to the federal tax code

Both bodies pressed hard for the state to conform to the federal tax code. However, while increasing the married standard deduction, it would be delayed until tax year 2014.

Other conformity provisions in the bill include increased income limits and an unlimited time for the deduction of student loan interest and increased maximum exclusion for employer-provided adoption assistance.

Several deductions are extended through tax year 2013 only. They include:

The bill would provide a $1 million one-time appropriation to the Revenue Department for the cost of implementing the tax code changes.

Lenczewski noted that the Department of Revenue has said it may be able to automatically adjust for the changes of returns that have been filed.