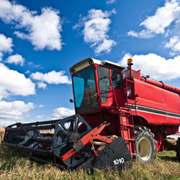 We’ll get to the tax avoidance part in a bit, but indulge us for a quick set up.

In one surprising report, state revenues in November and December exceeded expectations by about 4 percent, or $114 million, the Minnesota Office of Management and Budget (MMB) announced. In the second, not so surprising report, USDA declared Minnesota the big winner in this past year’s drought-impacted U.S. growing season as our state’s farmers harvested record corn and sugarbeet crops and strong harvests of soybeans, wheat and other field commodities.

These two reports are more closely related that most Minnesotans might assume.

“No one wants to pay more taxes than necessary, so companies were paying taxes early and farmers were buying lots of equipment to lower their taxes,” said Charlie Swenson, of Southwest Implement Inc. at Tyler.

MMB economists back up this view, cautioning in two recent revenue reports higher business and capital gains revenues resulted from companies and the wealthy declaring profits in 2012 to avoid 2013’s tax hikes.

Congress was threatening at the time to push the U.S. government and economy over the so-called “fiscal cliff” and reinstate higher tax rates. The bump in corporate tax revenue shouldn’t be construed as an overall strength of the economy, MMB warned, and shouldn’t be assumed to continue on in 2013.

The fiscal cliff was averted temporarily in Washington. But not before corporations operating in Minnesota paid $270 million in November-December taxes when state officials were expecting payments of $177 million. This 52.5 percent boost more than offset lower sales tax receipts during the holiday season that fell 5.1 percent from expectations.

Swenson, who is president of the Minnesota-South Dakota Equipment Dealers Association, said he expects many of his implement dealer colleagues were among the corporations paying taxes early. And he knows farmers with good crops and high anticipated incomes were buying new equipment as business expenses to lower exposure to higher tax rates threatened by Congress’ antics with the fiscal cliff.

“I can’t say I’ve seen a ‘normal’ year in the past five years,” Swenson said of his own implement dealership. “Sales are up about 10 percent from the same period of 2011,” he said. “Over a longer stretch of time, I would say November-December sales are up from 50 to 100 percent.”

USDA’s Economic Research Service is scheduled to release 2012 farm income and expense data on February 11. It will not be an easy balance sheet for people in American agriculture to read or interpret because some key agricultural states were devastated by drought. Logic says those farmers and farm-support industries will not be “farming” the tax codes like we see in Minnesota.

Another factor that confuses non-agricultural people is that one year’s crops are usually marketed in the following calendar and tax year so farm income data trail growing conditions and harvests. Higher farm income in 2012 has more to do with 2011 crops than with commodities raised and sold in the past year.

The large and profitable crops grown in 2012 should boost the rural economy this year, Swenson said. But just how much is hard to predict.

A lot of grains and soybeans went straight from the fields to the markets this past fall because of high commodity prices and uncertainties about what Congress might do to tax and farm policies. This might disrupt normal marketing patterns for the months ahead, and might disrupt normal income reporting for American farms.

Statewide, the Minnesota USDA statistics office said Minnesota farmers harvested a record 1.37 billion bushels of corn – their largest field crop. That was 14 percent more than harvested in 2011, and the average statewide yield was 165 bushels per acre, or 9 bushels per acre more than the previous year despite drought in parts of the state.

Nationwide, USDA said the 2012 harvest showed average corn production fell from 147.3 bushels per acre in 2011 to 123.4 bushels per acre this past fall. Back of the envelope scratching suggests Minnesota corn farmers are reaping a windfall from the 2012 corn crop given prices estimated at between $5.50 and $6 per bushel for the marketing year.

This does spill over on the rural economy. It does boost state tax revenues. It does strengthen the Minnesota economy. It will distort when data are recorded, but we will all be better off for it.