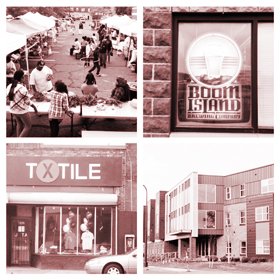 The West Broadway Business and Area Coalition is setting out to prove that its business district has everything one needs to throw a spectacular party.

For the upcoming Taste of West Broadway fundraiser on Thursday, February 26th, food will be prepared and served by eight local chefs from Avenue Eatery, K’s Deli, Cookie Cart, WholeSoul, Pimento Kitchen, Louisiana Purchase Seafood, Broadway Pub and Grille and Breaking Bread Cafe. Event patrons will have the pleasure of enjoying a wine tasting hosted by Cliff ‘n Norm’s, Merwin Liquors and Broadway Liquor Outlet. Boom Island Brewing will serve beer samples and its nearby taproom will host the event’s After Party.

Hopewell Music Cooperative North’s string quartet will perform, and an artist from the Capri Theater’s Legends series. Silent Auction items include Cookies for a Year from Cookie Cart, visual art, a backyard BBQ for 8 from a local grill master, as well as concert tickets and other eclectic pieces.

The WBC chose the Mpls Photo Center, located just off West Broadway on North 2nd St, in one of the most beautiful historic buildings in all of Minneapolis. Mpls Photo Center has stunning views of downtown and guests can peruse two photography exhibits, Rock and Roll and Vivian Maier.

“We are excited to host this unique experience for the community, exhibiting many of the great food and cultural offerings on the avenue. Collaborating creatively with the businesses and bringing people together is what the West Broadway Coalition does best,” said Justin Baylor, business owner at McDonalds and the JADT Group and a member of the WBC Board of Directors.

In the five years since the organization’s last big fundraiser, the West Broadway Business District has grown significantly. The WBC has built a membership of 83 businesses, nonprofits, farmers market vendors, and individuals. The West Broadway Farmers Market, founded in 2011, has seen steady growth for four seasons, and FLOW Northside Arts Crawl plans to welcome 6,000 people in celebration of its tenth anniversary this summer.

DeVon Nolen, native Northsider, lead planner for the event and manager of the WBC’s West Broadway Farmers Market, is looking forward to the Taste of West Broadway on many levels: “This event is a great opportunity to showcase some of the thriving businesses along our main commercial corridor. We need to be more intentional about sharing the positive happenings in North Minneapolis. We must celebrate what we have accomplished so far, working collectively, and continue to build cohesion between the community and businesses. A vibrant West Broadway and Northside is possible.”