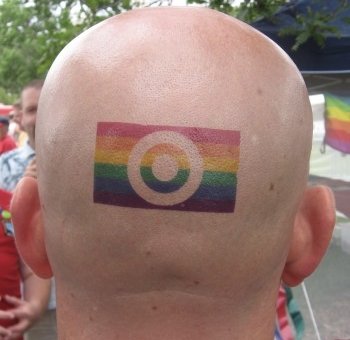 In a blog post on Tuesday, Target executive Jodee Kozlak announced that the company has filed a brief in court in support of marriage equality in Wisconsin and Indiana, and that the company is publicly backing same-sex marriage. The move comes after several missteps by the Minneapolis-based retail giant.

“[T]his week, Target joined several other national companies to sign on to an amicus brief in support of marriage equality. The brief is currently pending in the Seventh Circuit,” Kozlak wrote. “It is our belief that everyone should be treated equally under the law, and that includes rights we believe individuals should have related to marriage.”

Without getting into the specifics of a court case, this brief evaluates the issues created by states that both prohibit same-sex marriage and also refuse to recognize marriages that were conducted legally in other states. This position is particularly challenging for a large organization that operates nationally, such as Target. At Target, we have long offered comprehensive, competitive benefits to our LGBT team members and their families, often above what is legally required. We continue to do so today because we believe doing so is right for our team and for our business. But current laws — in places like Wisconsin and Indiana that are addressed in this brief – make it difficult to attract and retain talent. These disparate laws also create confusing and complicated benefits challenges across multiple states.

Target caught flak in 2010 when it gave money to MN Forward, a conservative PAC that donated to gubernatorial candidate Tom Emmer, a candidate who vociferously opposed LGBT rights. Emmer, in turn, had given a donation to You Can Run But You Cannot Hide, a conservative Christian ministry engaged in anti-LGBT rhetoric. The ensuing fracas created significant community backlash and many Target boycotts were organized.

Target was then silent during the campaign against an anti-gay marriage amendment in 2011 and 2012, and during the legislative debate to pass marriage equality in 2013.