Last year the upper midwest emerged from a 3-decade funk of watching baseball indoors in the world’s worst stadium. Yes, the Twins won two World Series at the Metrodome and created great excitement and community spirit in 1987 and 1991. But that was because of the teams, not the venue.

A few nights ago I went to a game by myself at our year-old ballpark, courtesy of a last minute cancellation and discount price offer of a friend with season tickets. (Thanks Rita!) I took the opportunity to just wander around for the whole game, sit in different sections all over the ballpark, take some pictures, and just let the sights, sounds and smells waft. 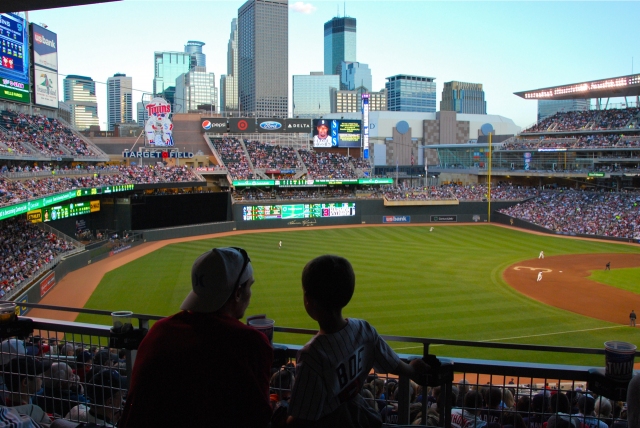 You can almost see the Metrodome from here – but who wants to?

I went to 3 games last year and fell in love with Target Field like just about everyone else. But last year the place was new — unfamiliar and unexplored. Monday night I felt like I spent some quality time with a new friend.

I’d never gone to a ballgame alone before and I enjoyed the experience in a whole new way. Not that I don’t like good conversation (because I do) but it was a chance to just look around and get to know the place. The baseball game seemed like a backdrop for the real event, which was the ballpark itself, and seeing how the people interact with it and with each other. 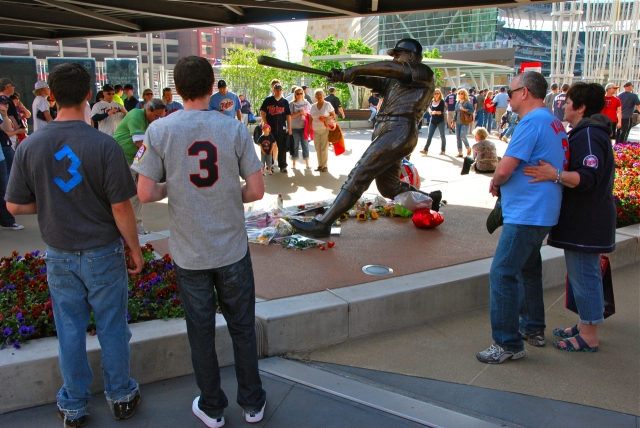 There were a lot of “#3s” on this night. Everyone who passed by paid their respects at the Harmon Killebrew statue. 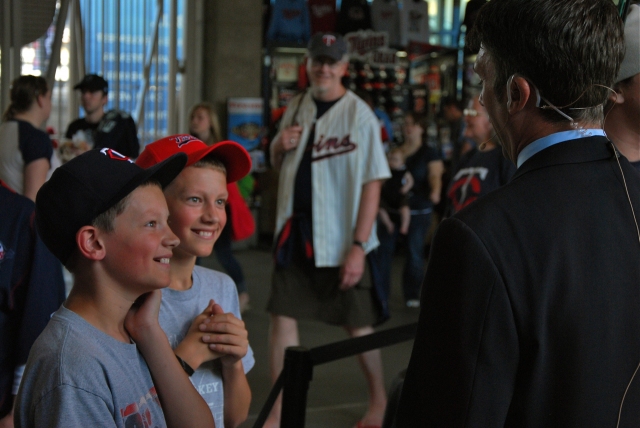 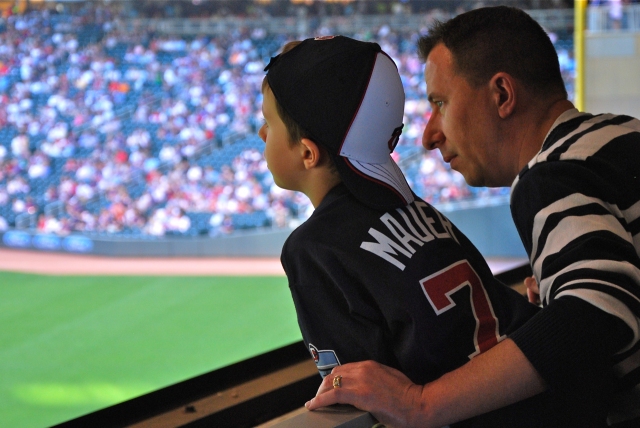 I’m not sure if I wish I could be the kid or the dad.

The evening began with a tribute to Twins great Harmon Killebrew, who recently died of cancer (see previous post). There was a video and a moving moment when the entire Twins team surrounded the big #3 etched in the infield dirt as manager Ron Gardenhire gave a short speech about his hero and held Harmon’s jersey in the air. 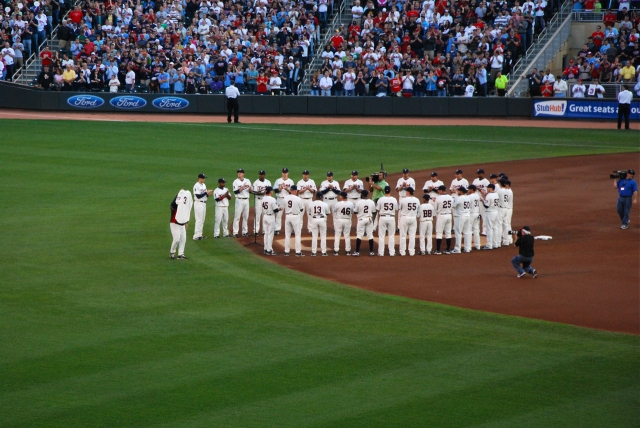 Gardy and the current Twins team remember their mentor and friend, Harmon Killebrew. 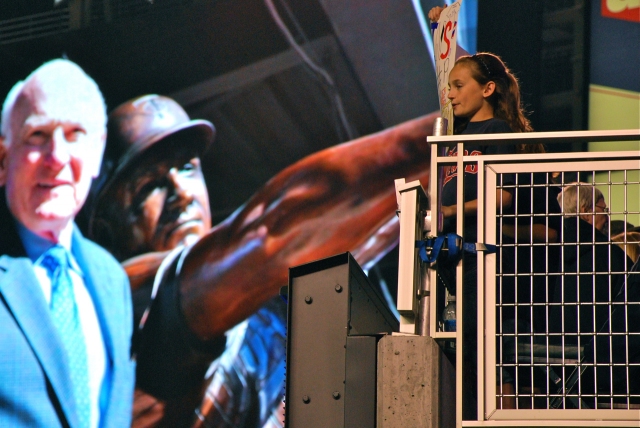 She’s too young to appreciate the importance of Harmon Killebrew to Twins fans, but when she’s older, she’ll remember being here on this night. 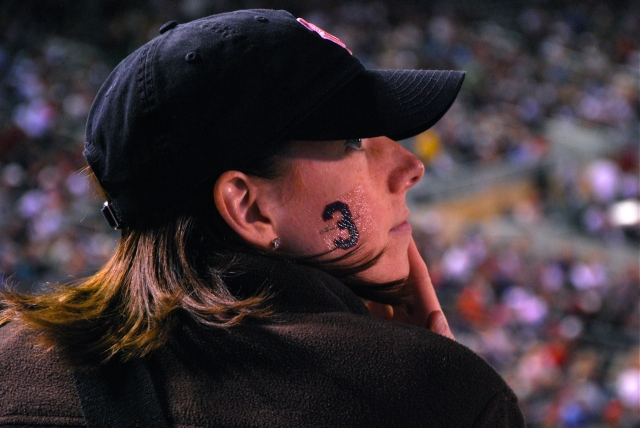 Everybody is #3 this week. 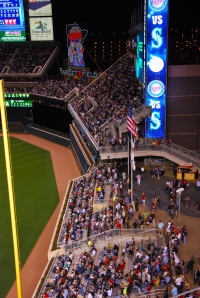 I think my favorite part of Target Field is the outfield — asymetrical, quirky and visually interesting from every angle. Little flower beds, an overhanging home run porch in right field, the iconic Twins-shaking-hands sign in center, the steep angular lines of the seats, the view of the Minneapolis skyline to the east — I can go on and on.

On this night, slugger Jim Thome returned from the disabled list with a vengeance and hit two homers – one a 465 foot monster that landed almost at Gate 34 in the right field plaza. 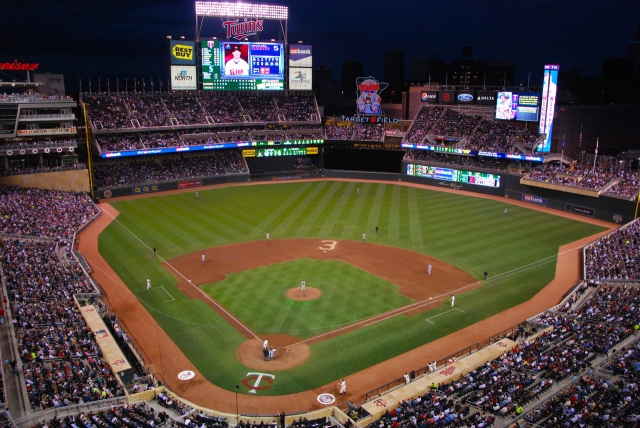 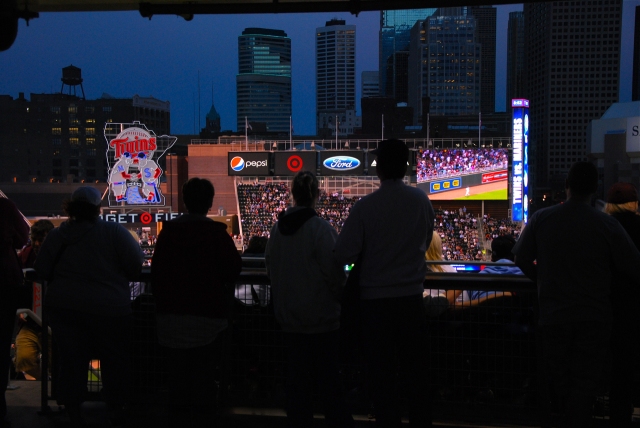 Target Field gets even more beautiful as night falls.

The Twins were great last year, winning the division and providing us with a lot of excitement. This year they’re off to a slow start, to say the least. As I write this, the Twins have the worst winning percentage in major league baseball and are 14.5 games out of first place. But people are filling the ballpark every night and having a good time anyway. Why? Because they’re spending time together outdoors, in a place that is better than they had hoped for and which has quickly become much more than just a place to watch a baseball game. 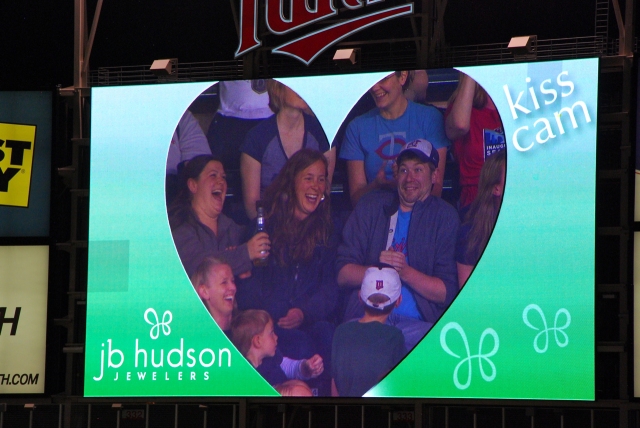 My daughter Emily’s long-time friend Kelsey Boesch (center) happened to be on the Kiss-Cam that night. You’ll have to guess who she just kissed. 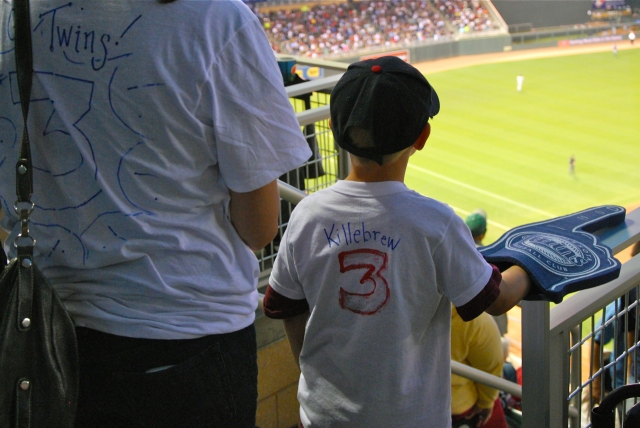 This night was all about Harmon Killebrew

Tomorrow night I’ll be back at Target Field with my daughter Lauren — Chicago’s biggest Twins fan and lover of Target Field. I can’t wait. 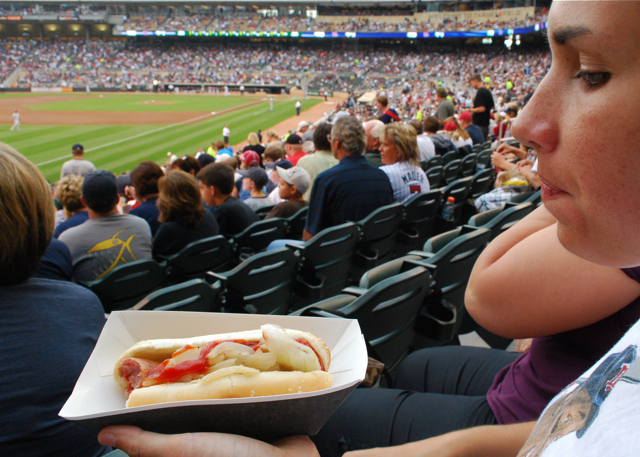 Lauren with her first Target Field Kramarczuk’s brat last July. There will be more.

But in the longer term, I’m also looking forward to growing old together with my new friend — this wonderful place.

(To see more photos from this game, go to my Flickr set here.) 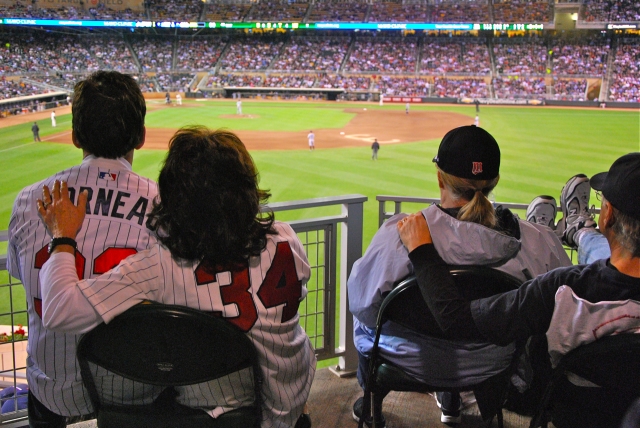