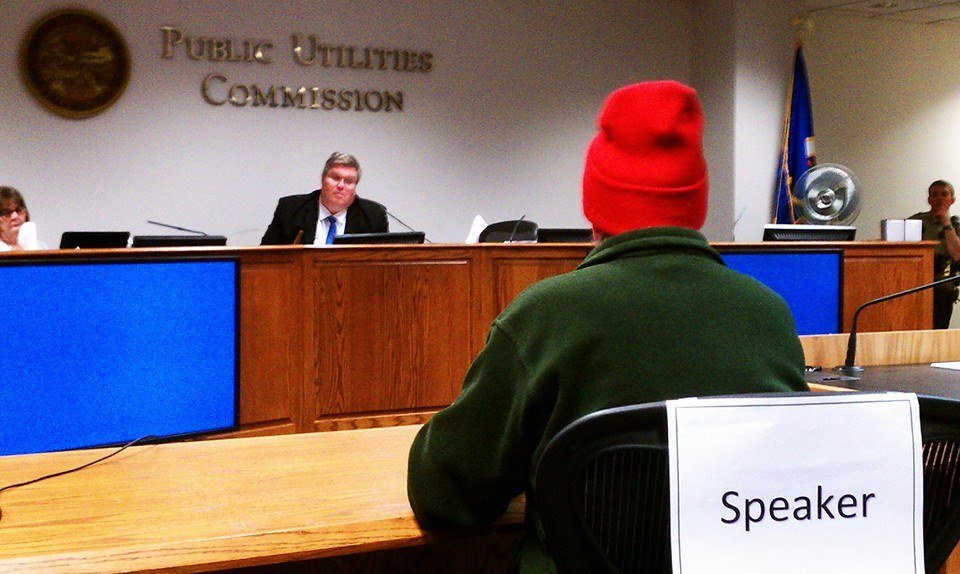 Hat tip for picture above to Gillette of Occupy Minnesota

On April 3rd there was an open public meeting by the Minnesota Public Utilities Commission in St Paul. The topic being addresses by the PUC is wether they should allow the Enbridge Corporation to increase their capacity of oil pipeline #67 going through northern Minnesota on to Superior Wisconsin. This pipeline carries Tar Sands Oil which is crude oil extracted from Alberta, Canada. It is being opposed by indigenous communities and environmentalist groups all over Canada and the United States.
The Public Utilities Commission hearings on this has been followed by myself and other activists primarily in Occupy Minnesota, the Indigenous Environmental Network and Minnesota350.org. At this hearing though there was a new group present that we had never seen before. It was a group of men who wore “working class” attire as well as men in suits. This mirrors the recent experience of activists at the PolyMet Mining hearings a few weeks back. These men claimed to be members of a variety of trade unions. I will be doing a story in the future on this phenomena in the very near future.
However for now I will simply focus on my own testimony. All of us who testified were asked by the Commission members ” Ok so what do we need to know.?”
This is a synopsis of my response to that question.
I speak as a member of Occupy Minnesota and as a strong ally of Idle No More.
You ask what you need to hear. As many of us in Occupy and other groups have been at these hearings from the very start. We have watched as we saw the skids being greased for Enbridge while at the same time pretending that our opinions matter. We know that our opinion does not matter. So this is what you need to hear from those of us who have lost faith completely in this process. We know that people like the Koch Brothers and others like them own the politicians and the Committees you form.
I first note that the only two people here that were obviously Native American left this meeting before it even began. The Native community are recognized as leading the struggle against Tar Sands Oil. That alone speaks volumes on the lack of legitimacy in this agency and process. I am going to turn this conversation on it’s head. You ask “Should we allow Enbridge to increase it’s capacity for Tar sands Oil. Those of us who have lost faith are asking a very different question. We ask instead what can we do to shut down this pipeline completely? People outside this room are talking, planning. Planning for acts of Civil Disobedience. Need I remind you all here that in the mid 80’s Minnesota faced another issue. That was the power lines struggle. During that time it was brave anonymous heroes who came, in the dead of night and pulled those lines down. When erected again they came along and pulled them down again, in a different spot.
Many activists and scientists realize that with Tar sands that if these lines go through that it will be game over for trying to protect us all from the consequences of Global Climate Change. We know that this is a deadly serious issue. So quite frankly your laws, your system are irrelevant to us. To us it is no longer legitimate. In fact it is the opposite.
That was the essence of my testimony to the Minnesota Public Utilities Commission Hearings April 3rd 2014. There was also a swipe at the sold out Trade Union Movement leaders but that will be covered in a future article.
Folks let me be clear here. Your future is at stake. More importantly your children’s future is at stake. As well as your children’s children. Global climate change is barreling down at us all. This is very real and many of you know it. I plead, i beg of you to get active. There are groups who are trying to organize on this. Occupy Minnesota, Idle No More, MN 350.org, Indigenous Environmental Network. Help organize and build all these groups. For the sake of yourselves and future generations. We are rapidly approaching the tipping point of no return.
If you are not willing to organize for your own children’s future and the future of their children then there really is nothing I can say to you. Indeed I am at a loss to understand you and have nothing to say.
Organize now. While there is still time.