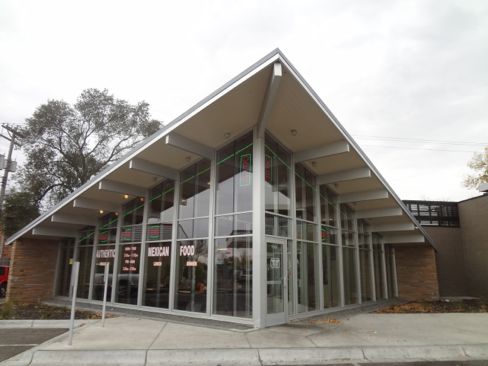 I love exploring little Mexican hole-in-the-walls, but I have to admit that my two latest discoveries don’t exactly fit that description. Andale Taqueria y Mercado, housed in a former Embers at 77th and Nicollet in Richfield, actually aspires to (or at least inherited) some architectural chic, with a glass façade,  peaked roof and smart orange and green color graphics (repeated on the website). Maya Cuisine at 1840 Central Ave. N.E., in Minneapolis is smaller, with a more limited menu, but also combines tasty Mexican fare with low prices and a modicum of style. (The cloud ate my photo of the exterior, so the photo below is lifted from their website).

At Andale, you order at the counter, pay, and wait for your number to be called. The basic menu is pretty standard – tacos, tortillas, burritos, tacos, quesadillas and the less familiar alambres – which seem to be meat and veggies served in a pile over corn tortillas – sort of like kabobs minus  the skewers. 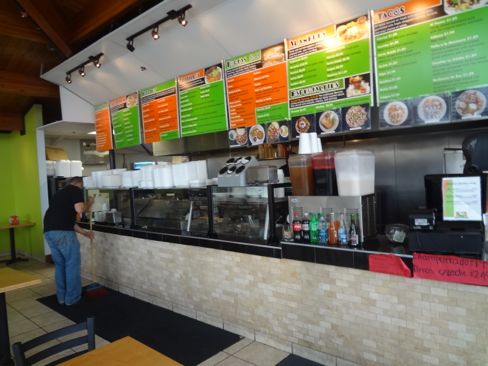 But there’s a lot more variety than even at most of the local taquerias – with the tacos, you get your choice of the usual carnitas, barbacoa and al pastor, but also the less commonly sighted lengua (beef tongue), cabeza (beef head), buche (pork stomach) and tripa (beef tripe), all priced at $1.89, and served with the standard accompaniment of chopped onions and cilantro. 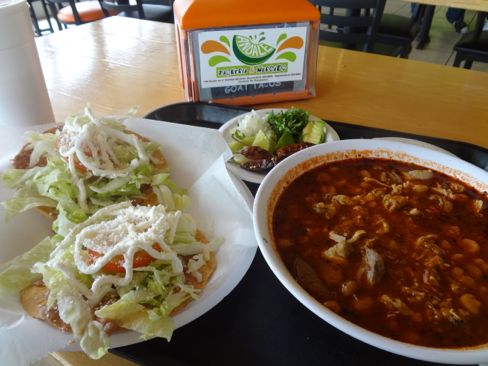 In addition to the menu mounted above the counter, weekly specials are featured in photos taped to the signboard, and hand-written signs taped to the counter: dishes like a sopa de mariscos, brimming with seafood  ($13.99), and pozole rojo, an oily, spicy, hearty soup of slow-cooked pork and hominy ($8.49), served accompanied by two bean tostadas, and a plate of chopped onions, dried chili peppers, cilantro and avocado to stir in.

Next door to the taqueria is the mercado, with the usual grocery store items plus an on-premises bakery, meat market and deli featuring Mexican specialties. The taqueria is open daily for breakfast, lunch and dinner, and on weekends until 3 a.m. 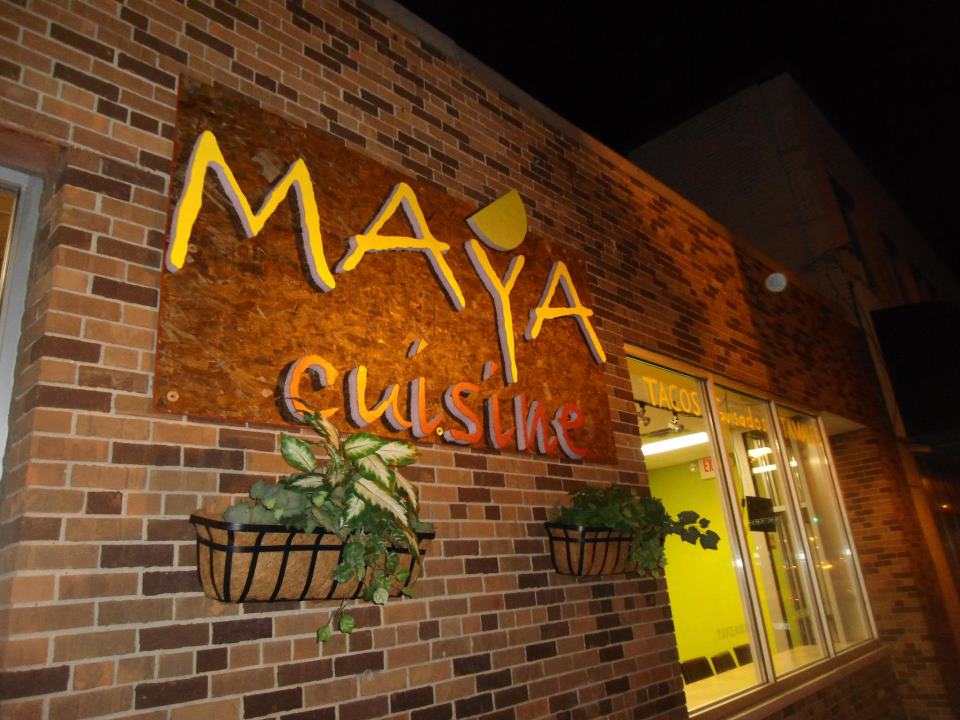 Maya Cuisine doesn’t have quite as much variety as Andale, but it does have its own attractions, including hand-made tortillas and tamales – made on the premises – and a bigger selection of tamales than I have seen anywhere else.  Tamales filled with chicken or pork in salsa verde are nothing new, but Maya is the first place where I have seen tamales featured on the menu stuffed with chicken in red sauce, wrapped in banana leaves instead of the usual corn husks. Also offered are several vegetarian varieties, and sweet tamales filled with pina con coco y pasas (pineapples, coconut and raisins), and fresas con Durazno (strawberries and peaches).

Pricing is very simple: all the tacos, tostadas and tamales are $1.75 apiece, and the menudo (tripe soup) pozole, burritos, taco salads, tortas, and quesadillas are $6.75 – the same price as the Mexican plates , which include rice and beans (black or pinto) plus your choice of any three from the menu of tacos, tostadas and tamales. You might want to watch their Facebook page for occasional specials; one day last month they featured all-you-can-eat for $9.99, including several items such as huaraches and gorditas that aren’t featured on the regular menu. Open daily for breakfast, lunch and dinner. 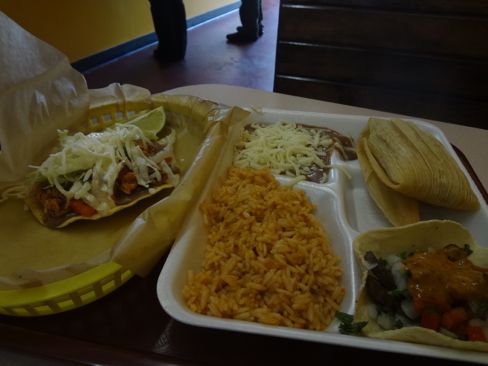 Maya Cuisine’s Mexican Plate: taco, tostada and tamale with rice and beans for $6.75.