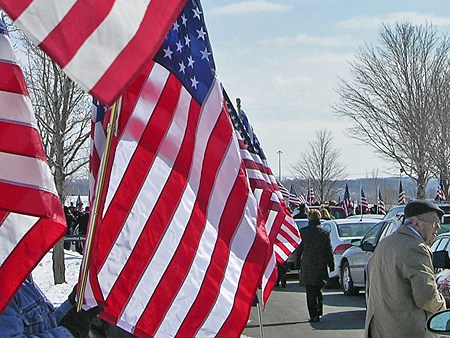 Trouble in mind, I’m blue
But I won’t be blue always
‘Cause I know the sun’s gonna shine in my back door someday
— Richard M. Jones, 1924

154 Patriot Guard there to thank Andrew for his ULTIMATE sacrifice…. WOW!
— Mark Wiessner

Wow! indeed. Thanks to all who attended, and to the Military that supplied such great support and respect to my brother and sister-in-law, and other family members. And for the honor with which they bestowed upon Corporal Andrew Charles Wilfahrt, 552nd Military Police Company. Burns came out of 3rd platoon in November to HI due to a non-combat knee injury. He bunked next to Andrew in HI. Gil entered basic with Andrew. Being the two old guys they formed a strong cohesion. They both felt very dear to Andrew. In fact we must have received at least 20 to 30 claims from pre and post friends that he was their best. What a man Andrew was.
— Jeff Wilfahrt Born: May 7, 1979 in Minneapolis, Minnesota. Andrew was killed in action on February 27, 2011, Kandahar Province, Afghanistan at age thirty-one.

If you are truly sorry, then please contact your representatives. Prayers just aren’t cutting it.