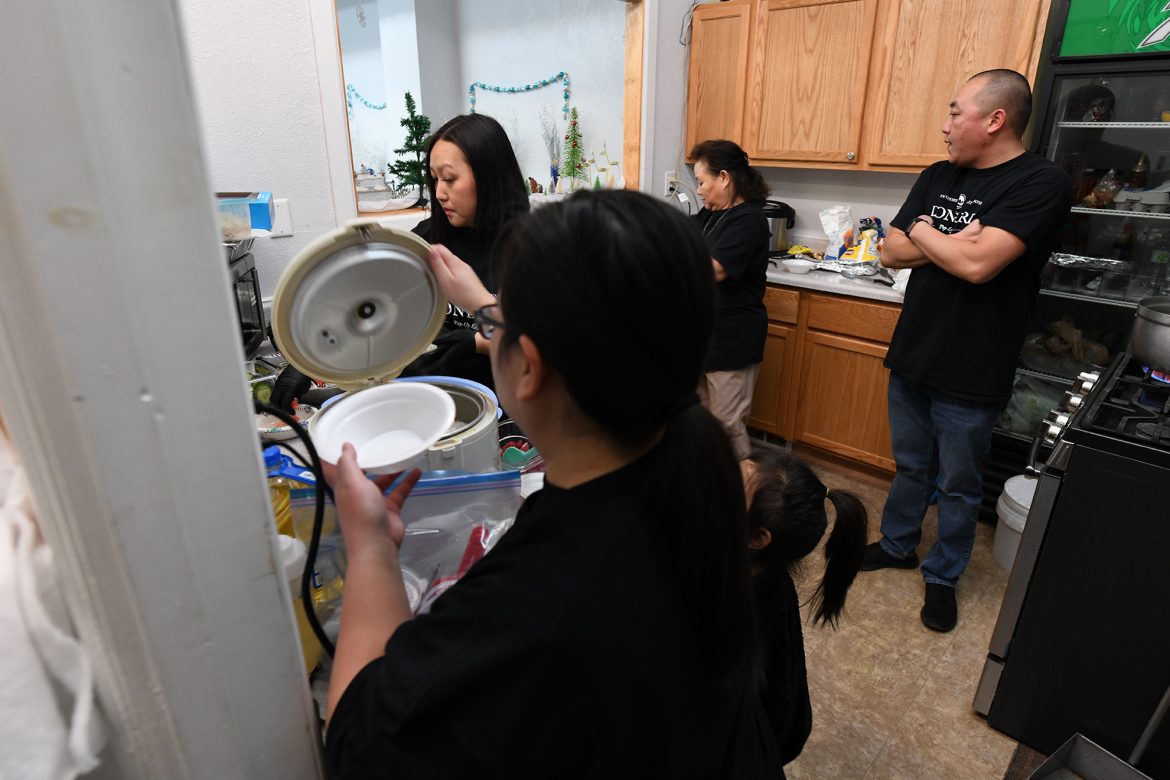 “Hustling is in our blood,” Chef Yia Vang said. “I’m not doing anything different than what my parents and my grandparents were doing in Laos and Thailand.”

Vang operates Union Kitchen, a Hmong American pop-up restaurant, alongside his cousin Chris Her. Like many immigrant food business owners, Vang’s culinary journey had humble beginnings. What started out as cooking phở in garages at church-sponsored backyard parties four years ago evolved into a pop-up restaurant just shy of two years old, now having found temporary residency outside of Sociable Cider Werks in northeast Minneapolis.

Similar to Union Kitchen, Donburi is a pop-up Japanese restaurant offering up rice bowls, poke bowls and fresh sashimi. Chefs and in-law siblings Yen Fang and Mark Thao made their debut with Donburi just three months ago at the Little Mekong Night Market.

The foundation of Fang and Thao’s business is multi-generational, based on the combination of general cooking skills, resourcefulness and resilience passed down to them by their immigrant parents, who also help run the business.

Union Kitchen works with local farmers to bring high quality ingredients to the table, but many have a hard time justifying the cost because of their expectations of what Hmong food can and should be – cheap.

“There’s a depreciation of Southeast Asian food. Hmong Market is my jam and I love all those guys … But that’s not what I’m trying to do here … It’s hard to do this when people have this view that Southeast Asian food is $5.99 food that you get in a box,” Vang said.

Vang, Fang and Thao serve different cuisines to different clientele. They serve customers varying in age, ethnicity and socio-economic status. But their business circles remain intertwined with their respective communities. Nonetheless, they all operate non-traditional food businesses, in an increasingly large community of entrepreneurs that challenge traditional business models – through the use of food trucks and pop-up restaurants.

Side-stepping traditional financing
It’s hard to track the constantly fluctuating number of non-traditional food operations in the Twin Cities but there’s no question that they play an important role in immigrant communities. They make business ownership more accessible, give aspiring entrepreneurs the opportunity to secure startup capital – for which a restaurant begins at around $100,000, while a food truck at $60,000 and pop-up restaurant events at even less. Overall they minimize the financial risks that come with brick and mortar establishments and improve the prospects for many of owning a business.

“The traditional financing system is built on [fluency in] English and a certain level of education. For an immigrant or refugee it becomes such a high hurdle for them,” said Va-Megn Thoj, executive director of the Asian Economic Development Association.

Based in the Little Mekong District, on University Avenue of St. Paul, AEDA is a nonprofit organization that focuses on expanding economic opportunities, such as business ownership, for Asian American communities in the Twin Cities. In addition to its lending and business development services, AEDA hosts the Little Mekong Night Market, an event designed to support both Asian-owned brick and mortar establishments and non-traditional food businesses.

The cost estimate for running a pop-up event is roughly a few hundred dollars, according to Thoj, “It requires very little cash to start. You could for example go to the Department of Health, get your license, spend a couple hundred dollars on food, and vendor fee, and test out your business idea.”

In line with Thoj’s numbers, Union Kitchen’s Vang said a pop-up can cost between $300-$500, “Pop-ups are lower risk, so all you really need is like three hundred or four hundred bucks for your product, and then maybe a couple hundred bucks to rent out the space.”

The comfort of home culture
The popularity of food trucks and pop-ups in immigrant communities also has to do with cultural compatibility. The Little Mekong Night Market’s success can be attributed to the fact that it copies Southeast Asian night markets, much like night markets elsewhere in Asia, which typically involve a wide variety of vendors working outside to satisfy a bustling crowd’s demand for food, shopping and entertainment.

Similarly, Lake Street in the midtown neighborhood of southern Minneapolis very much reflects the street food cultures of Central and South America. While considered a novel “foodie” experience to many U.S. Americans, food trucks and stalls have always been part of daily life in Latin American countries, in rural and urban areas alike. Many members of the Twin Cities Latinx community gravitate towards street food for their practicality, convenience and familiarity.

The story of Que Chula es Puebla, a food truck that sits on the corner of Lake Street and 12th Avenue, parallels that of Union Kitchen and Donburi.

Owned by José Luis Carbente Flores, a native of the Puebla region of Mexico, Que Chula es Puebla started four years ago as an in-home operation. It expanded into a small trailer and then a food truck. With the help of family and two employees, Flores continues to sell staples of Pueblan cuisine like taco árabe and cemita poblana for 12 hours a day.

“The people of Mexico are accustomed to eating in the street – it’s faster. And that’s why it’s part of our business plan,” Flores said.

For many entrepreneurs, a food truck or pop-up restaurant is a step toward a brick and mortar location. In the meantime, they will have to continue refining their business ideas, developing new products and gaining experience.

Challenges of running a non-traditional food business
Owning and operating a food truck is no walk in the park. Even though they help business owners get their foot in the door, food trucks come with their unique set of challenges.

“[Food trucks] seem to be the ultimate way to go. However …  it seems that these days it’s just as expensive and complex to have a food truck as opening a restaurant,” said John Ramirez, a workforce counselor at the Latino Economic Development Center.

Similar to AEDA, LEDC is a nonprofit that works to expand economic opportunities for the Latinx community. In addition to providing loans, the organization offers micro-entrepreneur training, free computer literacy and GED prep classes as well as other programs geared toward helping community members become economically independent. Many of the LEDC’s clients include Latinx-owned food businesses, both restaurants and food trucks.

Although food trucks are cheaper to operate than restaurants, they still carry a hefty price tag. Food truck owners must invest in a working vehicle and modify it to meet local fire and health regulations. For example, mobile food units must include multiple sinks, adequate ventilation systems and approved food-contact surfaces.

Food truck owners must also familiarize themselves with traffic and parking regulations set by local and state governments. For instance, in Minneapolis, food trucks cannot set up within 100 feet of a sidewalk cafe or a restaurant with a door to the sidewalk, or 500 feet of a sports stadium or arena. Parking next to a meter earlier than it’s allowed is also a punishable offense.

Another challenge often overlooked is the cutthroat competition over prime parking spots. Drive downtown Minneapolis on a weekday just before 9 a.m. and you’ll find food trucks circling the blocks, engaged in a game of musical chairs. Eager to feed hungry professionals emerging from nearby high-rise buildings, food trucks frequently battle it out at places like The Commons and on Second Avenue between Fourth and Sixth Streets. With thousands of dollars at stake, it is not unusual for a food truck to run a red light, cut other food truck drivers off or risk a citation by parking in a spot too early.

Ronald Lezama, interim executive director of the LEDC, noted that while competition is not as stiff on places like Lake Street, the profit margin there is much lower. Food trucks in the neighborhood can become successful, but must keep their prices lower to cater to those with less money in their pockets.

Likewise, food truck season typically lines up with farmers market season. Most of them go dormant during the winter.

More forgiving than food trucks, pop-ups nevertheless come with their own baggage as well. Some pop-ups take up residency at brick and mortar restaurants and bars, while others prefer to make appearances at marketplaces and festivals.

Vang cites storage and transportation as some of the biggest challenges to running a pop-up. Without a space of their own, pop-up teams shoulder the burden of having to lug around their equipment – everything from heavy grills, folded tables and kitchenware to napkins, cutlery and to-go boxes – in and out of venues on the same day. They practically live out of storage units and spend hours driving back and forth to transport equipment. Thao adds that just finding an efficient process for set up and tear down is a challenge on its own. Working out of shared kitchens, Vang often does food prep from 8 p.m. until 1 or 2 a.m. to avoid scheduling conflicts with other chefs over limited space.

Immigration enforcement impacting businesses
With the uptick in Immigration Customs Enforcement activities, the economic vitality of immigrant communities has been challenged. Lezama, Ramirez and Andres Salinas Sanchez, lending compliance officer and economic development lender of the Latino Economic Development Center, noted that immigrant business owners – regardless of their status – are caught in a vicious chain brought about by the current political climate.

“The first year I served here, which was almost four years ago … I had more clients that year than all of the second and third year combined. And that is because in those days we didn’t have all these social tensions where people would go outside and fear they’re going to be captured, deported, lose their families and jobs … After this new administration began and all these policies were put into place, we saw a decline in participants,” Ramirez said.

Undocumented business owners have this added burden. “They’re being more cautious. They know what the ramifications are, they know what’s going to happen if they get caught,” said Lezama.

Lezama, Salinas and Ramirez are unaware of instances of ICE targeting food vendors, specifically. Most raids occur in the farming and meatpacking industries, however in cases like the St. Agnes Bakery in St. Paul, an audit was used to track down undocumented workers.

There’s no question about the impact immigrant entrepreneurs have on the Twin Cities community and beyond. In the United States, immigrants make up about 25 percent of new businesses.