St. Paul Farmers Market — one of

“Art is powerful.  The artists that have been remembered were activists.  Picasso was very much anti-war and then there was Frida Kahlo,” said Tammy Ortegon, community organizer and artist/owner of Colorwheel Gallery in south Minneapolis.  “People thought my earlier work was radical so I pushed myself to do more.”

She created the cover of the 2012 St. Paul Almanac.  The picture (above) is a scene of the farmer’s market, one of a series of nine paintings of everyday people from Twin Cities’ neighborhoods and places such as Loring Park, East Lake Street, Kingfield, Midtown Global Market, May Day Café and more.

Her work is local, vibrant, folksy and of diverse cultural groups. One of her admirers told her, “You make my neighborhood beautiful!”

“It takes self-confidence to be an artist. My grandmother was an artist but very private about her artwork. We did not discover her artwork until after her death when we opened a box of her sketches,” said Ortegon.  “My grandmother could not call herself an artist although she was one.  It was the times she lived in; women were not encouraged to be artists. To do art was considered a luxury.”

Her grandmother was poor and raised seven children. She had no paper but used ink and crayons as her medium. She did not travel but was inspired by magazines such as National Geographic.  She liked to draw women from other cultures especially Mexico and South America.

Ortegon said she uses acrylics, “because they’re easier to work with and it dries faster than oils.”

“My mother is an artist.  She can only refer to her work as craft or say, “I am a copy artist.” In the last 10 years she has been experimenting, trying to find herself,” said Ortegon  “In the past she would do art for others.  What they wanted: portraits, cooking, baking, making curtains not art from inside of her.”

Now Ortegon’s two sons, the fourth generation, are doing art.  Her older son mixes and makes music.  He worked on murals when he was younger.  Her youngest son has worked on eight murals. He attends Perpich Center for Arts Education.

Ortegon does community events to promote peace, diversity, and understanding among community members. She has done two large outdoor murals working with young people:  Corcoran Neighborhood Center at 34th and Cedar and Peter Pan Cleaners at 38th and Grand.  Her third mural was Sister’s Camelot Bus, an organic mobile food share. Ortegon sketched out a scene on the bus and anyone at the Midtown Farmer’s Market that day spontaneously painted it. 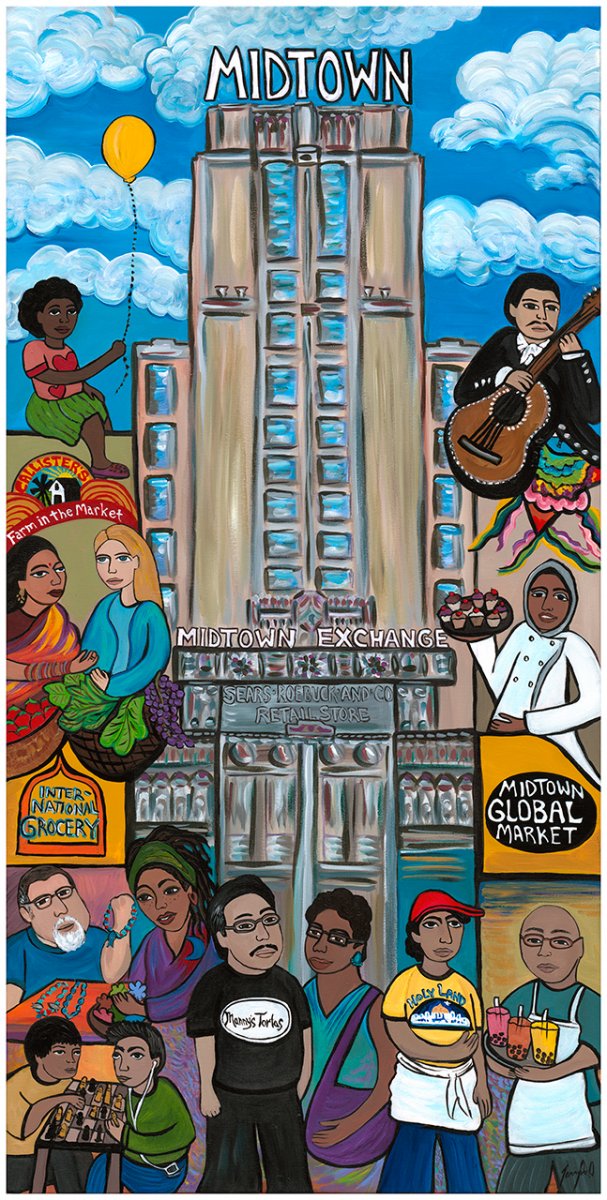 “Some of the challenges of doing murals are: it’s not your building, there are differing opinions, the weather and the use of ladders,” said Ortegon.  “But murals make an impact.  It is a whole community project.  Young people can own their community.”

Ortegon does four to six shows a year from her gallery.  On Sunday, August 12, Colorwheel Gallery will put on an one-day block party at the corner of 46th and Grand in Minneapolis, along with three other businesses: Café Ena, serving Latin style food; Patisserie, serving homemade ice cream; and King’s Wine Bar, grilling on their patio and featuring musical artists such as Twin Town Guitars, the Bunny Clogs, Megonia, Brianna Lane and Mayda.  This year’s event is a fundraiser to help build a new playground at Martin Luther King Park.

At the Colorwheel Gallery, featured artists are Giesla Hoelscher, Westy Copeland, Jane Evershed, Ricado Levins Morales and more.  In the back of the gallery, Ortegon has her one-chair hair salon.  Doing hair has sustained her financially for 20 years; eight of those years were at the gallery.  “I’m not taking new customers.  I want more time for my artwork,” said Ortegon.  “Over the years as I have been doing customers’ hair, I became part of their families.  I feel good when they feel good.  I have to hesitate when wanting to give them advice.  I find doing weddings is stressful.”  Besides hair she does pedicures, manicures and waxing.

Four upcoming events at the gallery will be:  September 9, a book release and reading from local author Mickie Turk of her new novel, The Delilah Case.  New Orleans style food will be served along with live music.

On September 16, there will be a “Vote no on photo ID” event, with speakers throughout the day, local art, live music and refreshments.

At the end of October, a “Day of the Dead” event will combine celebration of Frida Kahlo, an opportunity to create your own folk art, and refreshments.

In December, Ortegon’s annual Holiday Bazaar is called “Dump Wal-Mart, skip the Mall of America and support our local artist this season.”

All events are free and open to the public, and the website has a form for newsletter subscriptions for details.