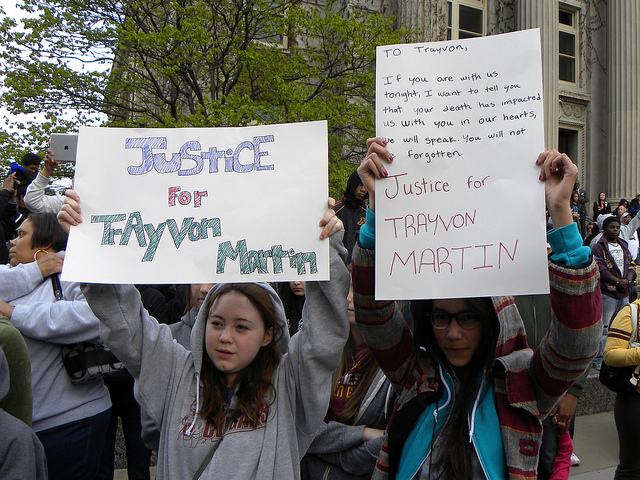 Everybody is talking about the killing of Trayvon Martin by George Zimmerman, and the not guilty verdict in Zimmerman’s murder trial. If you have something to say, or if you have seen someone else who lives in Minnesota posting an insightful comment or analysis, please send us the link, or comment below.
For example, here’s a Facebook post from Shannon Gibney:

This [http://www.huffingtonpost.com/2013/07/14/melissa-harris-perry-george-zimmerman_n_3595503.html] is exactly how I feel right now. It’s not that I didn’t know how much our country and institutions feared and hated Black male life before, it’s just that the brutal reality has been forced into the forefront of my consciousness once again.

In a little more than a month, the baby in my belly will come into this sad and beautiful world. Guess which sex I am more invested in than ever that it will be?

If you want to comment here, you can do so in two ways:

2) Use our Facebook comments below. We also welcome longer articles for Community Voices.

In the Twin Cities, the #Hoodies Up for Trayvon rally will take place on Monday, July 15 at 6 p.m. (Official hashtag #HoodiesUpMn)

You can also record a video comment using the tool below. You have up to 60 seconds to record your opinion, and you can re-record as often as you like.