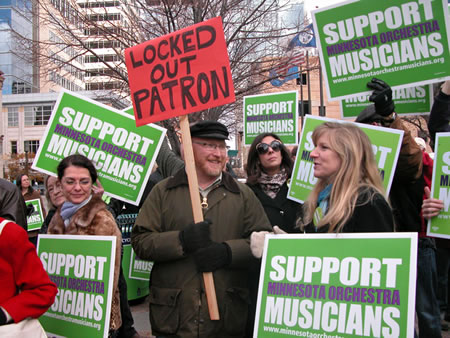 Musicians locked out of their jobs by the Minnesota Orchestra rallied with patrons, union leaders and other supporters in downtown Minneapolis Thursday, as the lockout of 95 members of Twin Cities Musicians Union Local 30-73 entered its second month. Meanwhile, musicians at the St. Paul Chamber Orchestra rejected a contract offer they said would violate the orchestra’s “high artistic standards.”

Managements’ decision to lock out musicians at the Twin Cities’ signature musical organizations – both internationally renowned – is unprecedented, particularly given the communities’ historically strong support of the arts. Both groups of musicians say their struggles for a fair contract go beyond labor-management issues to the larger question of artistic integrity.

Although buoyed by strike benefits from their international union, the American Federation of Musicians, locked-out Minnesota Orchestra members have been without regular paychecks and health insurance for 31 days.

Many have accepted temporary, fill-in positions with orchestras around the country. Others are beginning to seek permanent work elsewhere, which is bad news for the orchestra’s fans and patrons, clarinetist Tim Zavadil said. He was among the many musicians who carried signs on Peavey Plaza Thursday.

Attrition among orchestra members “is going to severely threaten the world-class status that the Minnesota Orchestra has been known for and what the state of Minnesota has supported for 110 years,” Zavadil said.

Orchestra ticketholders at the rally echoed those concerns. Nils Halker of St. Paul carried a homemade sign identifying himself as a “locked out patron” supporting the union musicians.

A longtime season ticket holder, Halker already has missed two concerts as a result of the lockout. He said he sides with the union in the dispute because he believes gutting musicians’ salaries would erode the artistic quality of a “cultural treasure.”

The onus for preserving and protecting that treasure, Halker added, falls on the orchestra’s Board of Directors, which includes the powerful CEOs of corporations like U.S. Bank, Land o’ Lakes, Xcel Energy and others.

“They are not being good custodians,” Halker said of board members. “I believe it’s an irreplaceable treasure we are going to lose if this is not resolved in a good way.”

Some observers have questioned whether orchestra board members are bringing their corporate values – and hostilities toward unions – with them to Orchestra Hall. Halker pointed to the increased use of lockouts among employers – from the National Hockey League to American Crystal Sugar – looking to exact steep concessions from their workers.

“It seems to me to be a pattern,” he said. “The lockout has become a new management strategy, very widespread, because management feels they have a lot more leverage now than they have in the past.”

Minnesota Orchestra management and its Board of Directors made the decision to lock out musicians Oct. 1 despite the union’s offer to continue negotiations while playing out the 2012-13 season – with a guarantee that musicians would not interrupt the concert schedule with a strike.

That offer was rejected, and concerts have been canceled through Nov. 25.

Management may decide next week to cancel more events, including popular holiday offerings. That would deal a stinging blow to restaurants, parking ramps and other businesses around the Minneapolis Convention Center, which will house the orchestra during construction of a $52 million lobby at Orchestra Hall.

Union members at the rally renewed their call for the orchestra to open its books to an “independent, third-party financial analysis” of whether the pay cuts are really necessary – a request the orchestra repeatedly has denied.

“We don’t know what they’re afraid of, why they won’t agree to this,” Zavadil said. Pointing out that the orchestra is demanding the average musician sacrifice $60,000 in concessions, Zavazil added: “I’ve never invested $60,000 anywhere before, but were I going to … I would need the most complete and verified financial information I could possibly find.”

If the orchestra moves forward with canceling holiday concerts, Zavadil said, the union has plans in the works to give concerts to fans and supporters at alternative venues, like musicians’ homes. Musicians were encouraged by the turnout – more than 2,100 people – at a sold-out concert staged by the union Oct. 18.

Halker was in the second row for that show. It was his only opportunity to hear the orchestra since the last season ended and, he hopes, not his last.

“It was spectacular,” he said. “It was emotional, it was powerful, it was thrilling – and sad at the same time.”

On Wednesday in St. Paul, musicians locked out of their jobs by the St. Paul Chamber Orchestra voted unanimously to reject a contract offer from management, prolonging a work stoppage that began Oct. 21.

Lynn Erickson, SPCO member and spokesperson for the musicians’ Negotiating Committee, said the SPCO would be “unable to identify any qualified artistic consultant who would support the proposed reductions.”

Kyu-Young Kim, an SPCO violinist and member of the musicians’ Negotiating Committee, called the contract proposal an attempt by management to divide current and future orchestra members.

“Management again fails to realize that an orchestra functions as a team, and that none of us in the SPCO have any interest in selling our present or future colleagues down the river,” Kim said.

Kim pointed to a letter made public Oct. 25 in which SPCO management said it planned to reduce the pay of highly paid “principal players” significantly less than those who receive the base pay.

SPCO management has said it is looking to cut $1.5 million from its annual budget in contract negotiations. Musicians have presented management with a counter-proposal that, they say, would save the SPCO more than $700,000 over the course of three years – while continuing to live up to the orchestra’s high artistic standards.

“Our goal is to preserve the artistic excellence of the SPCO in a fiscally responsible way, for our supporters and for this community,” Erickson said. “We want to resume negotiations as soon as possible and hope that a mutually agreeable solution can be quickly achieved.”

The rejected proposal also would give management the ability to terminate musicians at any time with no recourse, the musicians said.