It was the best of reports, it was the worst of reports. The story of jobs in the USofA continues to wind down like a Dickens novel, crammed of details and well defined moments lush with feeling and energy but lacking a strong, driving plot. We know when it ends, of course – somewhere many pages from now in the election in November. Exactly how it goes down is entirely another question.

But for August we have two job reports. The ADP report showed a private employment gain of 200k, a wonderfully robust gain that suggests a strong economy is really turning the corner. The official household survey from the Department of Labor came in with an incredibly weak 96k jobs gained, a number that is not really treading water. Why the discrepancy? What is the real state of jobs? How will this play in the election?

Keep reading. This novel is far from done. 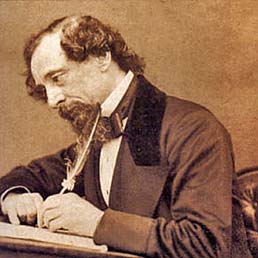 The first issue at hand is how there can be such a big discrepancy between two methods of measuring jobs. This was covered back in April when we had a similar gap between the two reports. It’s a common problem. ADP is a private company, Automatic Data Processing, which handles payroll for 600k businesses across the nation. Their report comes from crunching the many numbers they have in front of them – in short, they are telling us they had more payroll checks to write in August. The Department of Labor calls 140k business in a survey they have been doing since 1939 and asks how things are going.

The ADP numbers, as shown previously, are much less noisy overall. Here is a graph of their net change by month in jobs since the bottom of this cycle of the Depression, which was in January 2010: 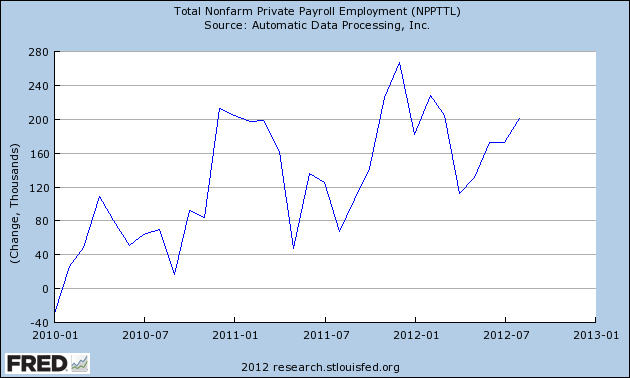 You can see that there has been a net gain in jobs over this entire period and it is growing steadily with a bit of noise. In the 32 months plotted, we see a steady increase towards 200k jobs per month with a few ups and down, showing an economy that is indeed gaining steam. It’s not great, but it’s real. We can expect the net deficit of 8M-10M jobs to be absorbed by about 2017 at this rate, which is about the end of the classical “Winter” or secular bear market by the standard business cycle prediction.

Is this anywhere good enough for Obama and his re-election campaign? Mitt Romney has already compared today’s Department of Labor report to Obama’s speech last night, saying, “Last night was the party, this is the hangover.” The weak jobs report is his best ammunition right now, along with other data showing that manufacturing and consumer confidence both dove in August.

The truth of the situation is that we are in a kind of recovery, one that requires fundamental restructuring of our economy before we can see any real gains. As noted before, a dramatic reduction in both oil consumption and imports is a big part of that restructuring as our secular trade deficit that sent $8 trillion overseas over the last 30 years starts to close. We will have to either manufacture more goods or consume less, probably both. This all takes time to sort out and tool up. Judging by the jobs report above the restructuring is more or less moving at about the pace it reasonably could, given that it has not been nudged along by anyone.

Is this Obama’s fault? A Democrat would point to the Depression that was already in full swing when he took office and show that there is a net job creation that exceeds either of Bush’s terms. A Republican would say that it’s not enough and that millions of people are suffering needlessly because there has simply not been enough action to turn the economy around.

That would probably make a Democrat point to the inability to pass a genuine New Deal -like work program that would get money into the hands of the people, followed shortly by the Republican saying that government never actually creates anything. And the debate would go downhill from there, possibly getting into some vicious “Yo Momma” snaps.

Meanwhile, the economy is chugging along at about the pace anyone should expect it to, given the changes that must take place before we see our way through to the denouement. There’s never really a climax to the action in economics, which is part of what makes it such a long slog. Like any good novel, an economy is about setting up the cast of characters and the scenery and letting it all run as it should. The jobs reports are no different in the end. They do lack a Madam Defarge and any whiff of revolution, so it’s all a bit too dry to actually become novel, though. Terrible shame.