Jazzlyn on the train (Photos by Jerry Clark)

Admittedly, I am in love with mass transit.  My love affair began in New York City. Riding the New York City subways, New Jersey’s commuter rail and the Long Island Rail Road sold me forever on the idea. Since then, I’ve ridden a few other mass transit systems around America and abroad: South Korea’s high-speed rail and buses, Seoul’s subway system, Boston’s “T”, DC’s Metro, Chicago’s ‘L’, Pittsburgh’s buses and Seattle’s buses and ferries. None of them have done anything except make this love stronger.

Ironically, given this love affair, and having grown up in Minnesota, I’d never ridden the Metro Transit system right here in our fair city. In the days when it consisted solely of buses, I’d heard from friends that it was slow, expensive, hard to navigate and that it didn’t run late enough to accommodate the bar crowd. Since I was fortunate enough to have a car, these anecdotal reviews were enough to keep me away.

When I heard of the Light Rail being built I was ecstatic. Finally the Twin Cities would join the ranks of major cities across America! With the addition of the Northstar Link my joy was even greater.  The LRT has been running for some years now, and the Northstar started months ago.  What finally motivated me to get out of the car and onto the Metro?  Sharing this joy with a three-year-old named Jazlyn.

From Big Lake to big city

We planned our adventure – traveling from Big Lake to the Children’s Museum in downtown St. Paul – using Metro Transit’s on-line trip planner. I found the Trip Planner to be easy to use and it set me to wondering how easy it would be to plan this trip without it.  My best guess it that it would pose serious challenges because the only overall system map I’ve ever seen is online (unlike Boston’s ‘T’ where system maps seem to be at every bus stop shelter.)

As we were about to be dropped off at Big Lake Station, Jazlyn looked sad. When I asked her if she was scared, she nodded yes. I admit I was a bit nervous about what would happen.  Mostly I had my fingers crossed that she would not need a potty break halfway between Minneapolis and St. Paul on the 94C express bus. Her mother scolded me for admitting my fears and I quickly responded with “Being scared is half the fun!” This statement doesn’t win me any points with either of them. 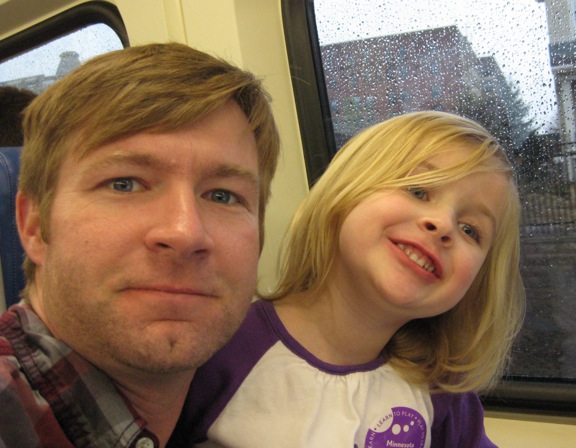 Hopping onto the Northstar Link is relatively easy. The park and ride lot has a nice drop-off lane, and because I have my VA card and Jazlyn is under 5, we both rode for free.  She is 41″ tall and only struggled a little bit to step up and onto the train.  Holding hands made both of us more confident that boarding would happen without incident.

Later I found out why the steps are higher than expected.  According to Metro Transit Public Relations Director, Robert Gibbons, the platform height is set by the needs of freight trains rather than the convenience of the commuter trains.

As we boarded, the friendly conductor advised us:  “Sit on the upper floor. The ride is smoother and the view is better.”  We heeded his advice and climbed the stairs.  It struck me as odd at the time that he didn’t ask for tickets like the Long Island Railroad or New Jersey Transit does, nor did he question Jazlyn’s age.

As we sit down I noticed a father with three kids who appeared to be around 10-12 years old.  On their first Northstar trip, too, they were  headed to the Mall of America and excited about it. Dad looked less pleased.  Each direction cost him $28 just for the ride.  Before the train started to move, they all had portable gaming devices and cell phones out.  I’m only 32, but that still felt like a generation gap to me.

I asked Jazlyn if she was excited for the trip. Now that we were seated, she could hardly wait for the train to roll.

I checked the onboard restroom to see how cramped it was.  Another pleasant surprise: these things are HUGE! I think a small basketball team could fit inside! Well that put to rest any worries I had about convenience.

As the train started rolling, I was happy to look over and see the tweens put down their games, as the oldest said that they should look out the window and enjoy the view.  The view was great.  Throughout the trip, I was amazed at how different the world looked when I had time to look at it.  I took a deep breath as my stress-free commute glided by.  Jazlyn, too found the trip entertaining, and showed no signs of boredom.

On to the Children’s Museum

Hopping off the train at Target Field was easy. The stairs were closed because they were wet and the escalator was packed. A line extended back 50 feet.  Along with a few other people, we circumvented the line by using the elevator.  A short walk away was the Fifth Street bus station. We waited a few minutes for the 94C to arrive and hopped on with ease; these stairs were much easier for Jazlyn.  The bus driver did not question her age. The under-five policy must be enforced on the honor system, since kids don’t exactly have ID cards.

After a quick and hassle-free ride, we hopped off in downtown St. Paul at 8:49 a.m. and walked two blocks to the Children’s Museum.  The doors were unlocked, but the museum would not open for another “four minutes and 38 seconds,” according to an employee, who was dressed as only someone who worked there would dress. The costume was sort-of Mork-from-Ork topped with a floppy striped hat. Perfect.

We took in a snack before the museum opened, then wandered around the various exhibits, I listened to the cavalcade of children playing, and played with a few of the exhibits myself.  We lunched at Savoy’s on Seventh Street after being picked up by “Papa.” We spent the afternoon at Papa’s house, and then got a ride back to the train station from uncle.

We hopped out of the car and walked a block or two in the rain to Target Field.  We boarded and had an enjoyable ride back to Big Lake.  Once again, we sat on the upper floor, this time at a table so I could begin writing.

Overall, the real story here is that there isn’t really a story.  The system is accommodating and easy to use, the trains are easy enough to board, and the bus is easy, too.   Is using rapid transit with kids worth the effort? Definitely.

FULL DISCLOSURE: Jerry Clark rides the Metro Transit for free with his VA Card stating that he has service connected disabilities.